for some violent images, sexual content and thematic material. 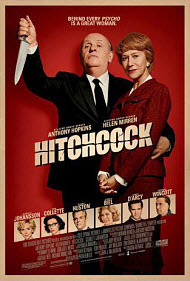 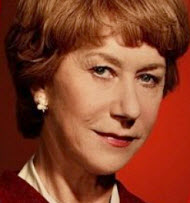 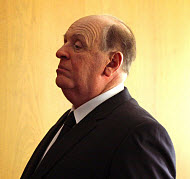 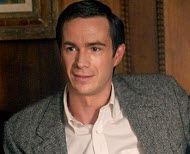 about Alfred Hitchcock and his wife Alma Reville

about the widely acclaimed movie Psycho (1960)

“Behind every Psycho is a great woman.”

The film, “Hitchcock” is many things, but above all, it is a story of heroic accomplishment. We forget how difficult it can be to make a film, especially an independent one which is what “Psycho” was, despite the fact that it was made under the eye of Paramount executives and strict code censors. It is also the story of an American success. A film such as “Psycho” could never have been made in Hitchcock’s native, and BBC controlled, England or in France or anywhere else. Only in America, where everyone is free to take a risk and thus succeed or fail on his own, could such a tale take place and such a success occur. Truffaut or Fellini or Bergman never put up their own money to make a film. Alfred Hitchcock and his wife, Alma, put everything on the line to make their movie, and it worked.

There is much in the movie I don’t like, but this central theme has a go-for-it-all backbone that drives the film forward and makes it ultimately satisfying. I have always felt that “Psycho” had strong religious overtones, which accounts not only for its initial success, but for its enduring appeal, as well. The movie premiered as the 1960s began, before the pill was introduced and before the sexual revolution mushroomed. “Psycho” anticipates not just the birth of sexual liberation, but its consequences, as well. The heroine begins her hapless journey by engaging in an affair with a married man, which leads to problems at work and then to theft, escape and ultimately a violent death. There is no escaping the fact that the underlying theme of the film is that the “wages of sin are death”.

We see the same idea played out in every subsequent horror movie: “Friday the 13th,” “The Texas Chainsaw Massacre,” “Halloween,” etc. All of these franchises copy “Psycho,” but none of them come close to matching its force or its poetry. Many film experts have said that “Psycho” was a response to social upheaval and change. Newsman Peter Jennings said it was a reflection of cold war fears. Well, the cold war is over, yet “Psycho”’s appeal and ability to not just frighten but to deeply unnerve goes on. Obviously the movie speaks to things both universal and primal.

Some of the small details in “Hitchcock” bothered me. Where was Hitch and Alma’s daughter, Patricia, who played a major part in their lives, and who had a small, and very effective, role in “Psycho”? The pet dogs got lots of screen time, but the couple’s daughter had none. I have always admired Anthony Perkins who was an accomplished stage and screen actor before and after “Psycho” and was portrayed here as though he was in over his head working with Hitchcock; his performance in “Psycho” says otherwise.

I also admired John Gavin, and I believe that the comments made about him here are probably inaccurate. But I am not surprised that a Hollywood screenwriter would hit so low; Gavin was an accomplished pilot and a war veteran, and was Ronald Reagan’s ambassador to Mexico. He was a popular romantic leading man who was much admired in his time. And he was perfect as Marion Crane’s confused boyfriend. What is it about minor Hollywood filmmakers, that they need to disparage practicing Christians or political conservatives at every turn?

A lot is made in the film about the shower scene in “Psycho” implying that the whole scene which took a week to shoot was done with Janet Leigh naked. In reality, she wore a body suit the whole time. And it was Hitchcock himself who decided to film the entire movie in black and white, not so much to save money, as to avoid having to show the red blood flow down the bathtub drain in that shower scene. Hitchcock may have objected to censors, but he was a strict censor himself.

Neutral
Neutral—“Hitchcock” is less about filming his most famous film than it is about the inner-workings of his marriage, his slightly sadistic imagination, and his wife. I expected (and wanted) more of the filming of “Psycho.” Instead, that’s merely the backdrop for the financing of the picture, and the marital problems of Alma and Alfred. The cast is quite good, even though most of them are little more than cameos.

The best thing about it is that it shows triumph over incredible adversity (challenges from the censors, financial problems, and illness causing setbacks), yet, throughout, there’s no real sense of urgency or of the financial duress they’re under. Something is missing, so it doesn’t quite work—almost, but not quite.
My Ratings: Moral rating: Average / Moviemaking quality: 4