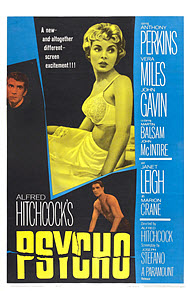 How shall “Psycho” (1960) be best described for Christian audiences? By providing information about questionable and anti-Christian content and themes, that’s how. For, while it’s true Alfred Hitchock’s suspense/thriller has stood the test of time, “Psycho” nonetheless did cause quite a stir among both secular and church ratings boards at the time, despite its Oscar nominations for Best Director, Best Actress, and Best Cinematography. Yet, even though there is minimal violence and no profanity whatsoever, a lot of Christian audiences simply won’t like this, period.

“Psycho”, as is well known, concerns Norman Bates (ANTHONY PERKINS) and the movie hinges entirely on the infamous “shower scene” in which Bates Motel guest Marion Crane (JANET LEIGH) is stabbed to death. That’s hardly a spoiler considering how the rug’s pulled out from under the audience and how the subsequent plot unfolds, as her disappearance prompts her boyfriend, her sister, and an investigator to venture into the darkness of the trap known as the Bates Motel.

The DVD (Digital Video Disc) version of “Psycho”, presented in its original theatrical format, includes a bonus documentary “The Making of Psycho” that describes a lot of the sexual and psychological themes present in this movie. In the book on which the movie’s based, for instance, Janet Leigh’s character was not only stabbed but brutally beheaded. That book, in turn, was based on a real serial killer in the 1920's. Considering all that went into production, it’s surprising this was released nearly intact for 1960 audiences.

By contemporary standards, “Psycho” is not very violent. It only seems violent because of Bernard Hermann’s famous music that provokes reaction. There are only two stabbings (including the shower scene and one other), and they both occur off-frame and below the frame, then the camera shows the blood (actually, chocolate syrup) and the music stops for dramatic effect.

“Psycho” was originally unrated, but now it is rated “R” for DVD and some videotape versions. There is absolutely no profanity or swearing. The “R” rating is presumably for brief nudity in the “shower scene,” some violence, and the aformentioned psychological and sexual themes. The accompanying documentary (only on the DVD) includes a few crude phrases by the interview subjects and one originally deleted scene.