also known as “Lock-Out,” “Escape From M.S. One”
MPA Rating:

for intense sequences of violence and action, and language including some sexual references. 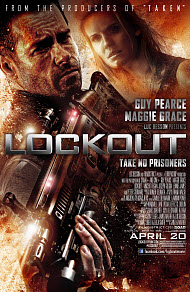 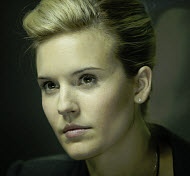 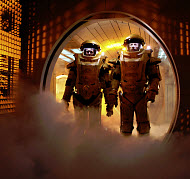 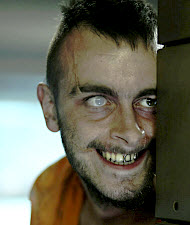 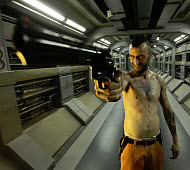 “Take no prisoners. From the producers of ‘Taken’”

The year is 2079. A massive spaceship hovers 50 miles above the surface of the Earth. Only, this is no ordinary spaceship. This is a prison. Called MS-One, this gigantic maximum security penitentiary is the first of its kind. Within its walls, hundreds of inmates are kept in a constant sleep-mode called “stasis.” It has its skeptics, though. Indeed, the daughter of the U.S. President, Emilie (Maggie Grace), who has heard that there are negative side effects of stasis, is on a humanitarian mission to visit MS-One and insure that the inmates are not being mistreated. Unfortunately, things don’t go as planned (do they ever?), and a prisoner escapes, holding Emilie hostage. He releases the inmates from their stasis, including his brother, Alex (Vincent Regan), a cruel, but intelligent, psychopath. Soon, the entire facility is overrun by criminals, and Emilie is caught in the middle.

Enter our hero, Snow (Guy Pearce). Snow was once a CIA agent, but a mission gone bad has left a friend dead, and all the evidence points to Snow as the murderer. Snow insists that he is innocent, and a briefcase that disappeared shortly after Snow was apprehended may prove his innocence. But without this briefcase, there is no proof, and Secret Service Chief Scott Langral (Peter Stormare) sentences him to 30 years on MS-One. However, the prison breakout presents a new chance for Snow, and fellow CIA officer Shaw (Lennie James) argues that, before any military action is taken, Snow should be sent in alone to attempt to rescue Emilie and thus lessen his sentence. He is also given an added incentive: the only man who might know where the briefcase is hidden is an inmate on MS-One. Snow accepts and enters the fray, a reluctant, but determined hero, who may not know what he has gotten himself into.

“Lockout” is a large, intense action film, but not a particularly intelligent one. The special effects are very good, and the scale of the design is impressive, yet it never quite reaches its full potential. For example, we are shown thousands of pods where the inmates are in stasis, but when they are released, we only ever see 40 or so of them rioting or running around. Also, the actions of several characters make no sense (why send a man on a dangerous mission while communicating with him through a device that everyone can hear, including the bad guys?) and the whole idea of a prison in space, while interesting, isn’t practical, at all. Some plot-point questions come together all too easily, while others appear, only to never be spoken of again, suggesting lazy screen-writing.

On the other hand, Guy Pearce’s Snow is a fun hero, who quips one-liners one after the other, like a Han Solo-James Bond mix, and yet, underneath his rough exterior, has a heart. He is certainly not a moral man, being a smoker, womanizer, and all-around scoundrel, but he has moments of heroism and selflessness. Emilie also exhibits compassion and a respect for human life. Unfortunately, the movie rarely slows down long enough for us to see much of this, and character development is pretty much reduced to brief emotional moments in between shootouts.

Speaking of which, “Lockout” is rated PG-13 for good reason. There are several shootings, stabbings, and rough-and-tumble fight scenes, some with moderately bloody results. Emilie has medicine realistically injected into her eye with a hypodermic needle. One man shoots himself in the head (off-screen) to save the life of another. Snow has voice-activated grenades, which barely give bad guys enough time to say “What… ?” before being blown to bits. Two people rapidly freeze to death on-screen, and one is then ejected out into space. A body is briefly seen in a laboratory, with half its head missing.

There is also foul language aplenty, with 1 F-word, and 11 S-words, as well as milder vulgarities and many misuses of God’s name. Alex’s particularly nasty brother makes sexual advances on Emilie, and there are also several sexual innuendos scattered throughout the dialog, most played for laughs.

So, in the end, “Lockout” is a relatively standard action film with sci-fi elements, explosions and gunfights galore, and little to no real connection to any of its characters, which is all pretty much what anyone expects from this kind of film. Thus, its lack of any morally strong message or strong story, as well as its constant violence and profanity, make this a movie worth skipping.

Positive
Positive—I really enjoyed this movie! Guy Pearce was really fun to watch, as were the two main villains. I watched the unrated version (the only version available at the time), and there were at least two parts that really grossed me out. So I don’t know how bad the theatrical version got, but the violence in the one I watched was pretty brutal. Overall, though, I thought it was a fun movie, and I would recommend it to older audiences who aren’t easily squeamish.
My Ratings: Moral rating: Better than Average / Moviemaking quality: 4½