One for the Money

for violence, sexual references and language, some drug material and partial nudity. 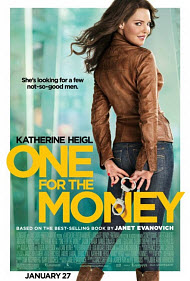 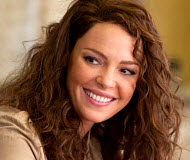 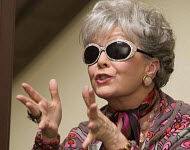 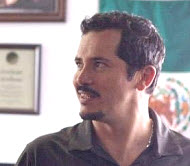 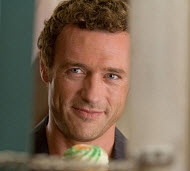 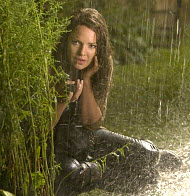 “She looking for a few not-so-good men.”

Stephanie Plum (Katherine Heigl) has been out of work for 6 months, her car just got repossessed, and she can’t pay her rent. The determined Stephanie will do whatever it takes to make ends meet, even if it means becoming a bounty hunter. This out of work lingerie saleswoman convinces her cousin Vinnie (Patrick Fischler) to give her a job as a bounty hunter at his bail bonds business.

Stephanie sets her sights on nabbing her ex-lover, Joe Morelli (Jason O'Mara), a local cop who is suspected of murder and has skipped out on his bail. Stephanie finds herself in over her head, so a veteran bounty hunter known as Ranger (Daniel Sunjata) comes to her aid and shows her the ropes of the business. As Stephanie sets out to bring Morelli in and collect her much-needed paycheck, she discovers that he may not be guilty after all.

Stephanie’s determination and initiative in her search for a job is probably the most positive element of this movie. As expected, there are a number of scenes involving people shooting at each other, chasing each other down, a car is blown up, etc. In one scene, a woman is pushed out of a car onto the side of the road, after being badly beaten up (we do not see the beating, just the results). She has some bad bruises on her face and arms. In another scene, a man in a boxing ring forcefully shoves Stephanie when she tries to talk to him.

Unfortunately, a lot of this film’s humor is derived from various sexual references and innuendo, and only serves to perpetuate and normalize the world’s views on sex and relationships. We discover that Stephanie and Morelli’s romantic past was nothing more than a one-night stand in high school, which she still isn’t over. The film earns its MPAA warning for “partial nudity.” In one scene, Stephanie takes in an old man, who missed his court date for public indecency. When Stephanie goes to pick him up, he stands up from his chair and his entire naked backside is shown. In another scene, Morelli barges into Stephanie’s house while she’s in the shower. He pulls back the shower curtain, and she strategically covers herself with her arms, obscuring her chest and lower body.

Stephanie befriends two prostitutes, who have valuable information about the murder. Their costumes are tacky and revealing. In another scene, Morelli attaches a wire to her so she can gather information. She is seen in her bra, as Morelli attaches the listening device. He tells her he likes her bra. Various crude references are made to male anatomy and one to female anatomy. There are roughly 15 or more uses of the s-word. The Lord’s name is taken in vain on numerous occasions, with at least 5 or more pairings with the profanity, d----. The middle finger is given once in the film. Profanities like b----h, a-- h----, and h---l are used a number of times, as well. One character yells “screw G-d,” after Stephanie tells him that God will get him for what he’s done. The character gets into his car after yelling that, and the car immediately explodes when he turns the engine on.

“One For the Money” has a few funny moments, but, overall, it is another lackluster action chick flick that falls back on contrived clichés typical of its genre, as it plays one sexual innuendo after another for cheap laughs.

Negative
Negative—My wife and I saw this movie without really knowing much about it. There is partial nudity (although you can’t really see anything) and bad language. There were some funny scenes, but, by-and-large, this movie is offensive in its use of bad language and several scenes showing Heigl’s upper portion… covered, but still, enough is enough. The story wasn’t all that great either, as it was quite predictable in some areas, as is most cops vs. bad guy movies. This can be classified as just another movie soon to be buried deep in the sales bin at Wal-Mart.
My Ratings: Moral rating: Offensive / Moviemaking quality: 2½

Terry, age 46 (USA)
Negative—I am very offended about the movie the one for the money using our Lord’s name in such a manner (using Christ or Jesus Christ, and G.D.) as cursing. What is wrong with the movie industry. I enjoy going with my church friends every Tuesday, but week after week they are getting worse. An abomination. The girl that played the main part was so pretty, but her mouth was horrible—using Jesus Christ or Jesus or G.D. or ffff’g was horrific. I wish we had a Web site to tell this to the movie directors that we are fed up with it. And ffffff’g and mother ffff’g is also an abomination. What can we do about this?
My Ratings: Moral rating: Extremely Offensive / Moviemaking quality: 2

Carol, age 69 (USA)
Comments from non-viewers
Negative—…interestingly enough, even SECULAR sites are giving it two thumbs down. But the main reason I have ZIP, absolutely NOOO interest in seeing this whatsoever: Crosswalk site had this to say: Lots of rude anatomy jokes ~ Language/Profanity: Rude gestures and a very steady stream of expletives throughout, including sh—, as-, bit—, da—and bast—-. God’s name is abused on numerous occasions and paired with da—. NO THANKS!! Any movie that’s this bad and trashes God’s name is not worth viewing. And on this very date, I intend to purposely not go see anything with a rating stronger than PG… even with those, I’ve learned, we must be very, very cautious! Too bad that Kathryn Hiegel chooses to star in such smutty movies—she was soo good in, “Love Comes Softly” but obviously did not want to go down the Christian movie path. Pity!
My Ratings: Moral rating: / Moviemaking quality: