The Pirates! Band of Misfits

also known as “The Pirates! In an Adventure with Scientists”
MPA Rating:

for mild action, rude humor and some language. 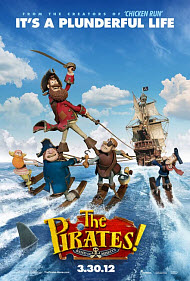 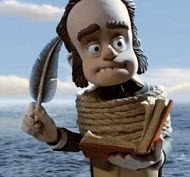 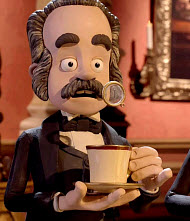 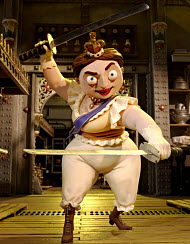 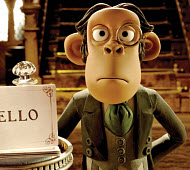 real sea monsters—dragons of the seas

the theory of Evolution vs. Creation

“from the creators of ‘Chicken Run’”

It is 1837 and the Queen of England (voice of Imelda Staunton) wants pirates destroyed. She wants to rule all the seas and the pirates are preventing her from doing that. She hates pirates so much, her throne reads “I hate pirates”. Meanwhile, the pirates are having their annual Pirate of the Year Awards, and Captain Pirate (voice of Hugh Grant) is on a mission to finally win the coveted award. He determines he is going to beat Black Bellamy (Jeremy Piven), Cutlass Liz (Salma Hayek), and Peg Leg Hastings (Lenny Henny).

Objectionable Content: Language—One use of the word ass and hell. Crap is used several times. Captain Pirate and another pirate are shown drinking with lemurs, and Captain says “I could have sworn they were girls.”

In addition to the usual fighting scenes found in pirate movies, there is a ghost ship, a pirate’s eyeball falls out into a drink, on a plague boat a pirate’s arm falls off, someone says “people who live alone are always serial killers,” and there is plenty of drinking. There is plenty of slapstick violence—anchors landing on people, Darwin gets tarred and feathered, a giant whale lands on Blood Island, opens its mouth and unrolls its tongue.

The Royal Society crest reads “Playing God since…”. There are a few references to Evolution.

The Pirate Captain and his crew have a wonderful relationship. They stick together and are like a family. Even though he is not the best pirate, the crew does not give up on him. They show admiration for him, repeatedly, throughout the film.

I did not like this movie. Although the storyline had the potential to be cute, and the film quality was excellent, it was not a great movie, overall. I expected it to be much better, based on the fact that we loved “Chicken Run” and “Wallace and Gromit.” I know that there will be some people who argue with my review. However, my 9 year old son, who usually sees movies without hesitation, told me he didn’t want to see this movie, based on the trailer we saw a few weeks ago. I am glad I didn’t make him go. I know that he would not have been scared. I just think he would have thought it was stupid (and not funny, at all). The family in front of us walked out before the movie was over. I think there are several scenes that would scare a child below the age of 6-7. My overall recommendation is to skip this film.

Positive
Positive—It is true that this film included references to wanting to look down women’s tops, Darwin talking about wishing he’d got to second base with a girl, and other stuff best described as mild innuendo, and, of course, the kind of comic violence you’d expect in a film about pirates. For that reason I’ve only given it an “Average” rating, but I think against this must be set the fact that the film also promotes a lot of positive values.

The moral lesson that comes out of the film most strongly is the fact that money is not as important as it seems. Also, pointed out quite clearly at one point is the fact that friends made out of fame or riches often aren’t real friends. Other comments have criticised the film for hinting at Evolution, which seems quite unfair because the film seems to make far more swipes against Evolution than in favour of it! Darwin is generally portrayed as a more of a comic figure rather than the impossibly heroic figure he’s usually made out to be, and at one point in response to the Captain’s plan, makes the common criticism of Evolution, “But the odds are overwhelming, it’s impossible!” To which the captain replies, “Nonsense—it’s only impossible if you stop to think about it!” I don’t think Evolution could be summed up any better!

It was funny, though probably not quite as funny as I’ve come to expect from Aardman Animations. As with “Wallace and Gromit” though, there are still all the extra jokes hidden in the background, so doubtless there are some that I missed. I’m glad to have seen it, though I’m not certain yet whether I’ll get the DVD.
My Ratings: Moral rating: Average / Moviemaking quality: 4

David, age 28 (United Kingdom)
Positive—This movie was adorable and very funny! It is NOT for children though, they would probably be bored. Yes, there are a few comments here and there, but, overall, it’s got an interesting story line, and if you liked the humor of the other clay movie these people made with the foxes, then you will like this. I really liked it, even better then I thought I would, and the end is surprising! The clay is awesome, and the characters are lovable and, overall, pretty clean. Definitely worth seeing 3-D.
My Ratings: Moral rating: Better than Average / Moviemaking quality: 5

Samantha, age 37 (USA)
Neutral
Neutral—I’m usually a big fan of Aardman studios, but this one fell kinda flat, for me. Random humor usually works for them, but with “Pirates!” it just… didn’t. Which is really sad, because they had a great cast of voices! I wanted to take most of them and put them in a better movie, especially Hugh Grant.
My Ratings: Moral rating: Better than Average / Moviemaking quality: 3

Kadie Jo, age 19 (USA)
Neutral—I love going to the movies. Every time I go to the movies, I hope that my expectations for the movie are not let down. A friend and I decided to go see Pirates because we had heard it was really good. For the most part, it was. The acting was good, the music was good, the animation was brilliant, in my opinion. However, from an overall standpoint, the movie was just okay. Something was missing. Unfortunate, to say the least, that when I walked out of the theater I was left with the feeling that it was just “average” for its genre.

Like I said, there are some good qualities about this film, like there not being too much filthy humor (this movie was much cleaner than other supposed “children’s movies” that I’ve seen this year). But overall? Just not a fantastic film.

In terms of objectionable material there was some nudity on one ship, so parents beware. There are some claims made about Evolution. There is also some humor you may want to watch out for, but nothing too vulgar or inappropriate, in my opinion. There were a few moments I laughed, and, don’t get me wrong, this film is funny, but I needed a movie with more substance, plot twists, something. Overall, a GOOD film, just not a great one.
My Ratings: Moral rating: Better than Average / Moviemaking quality: 3

Alexander Malsan, age 22 (USA)
Negative
Negative—This is a movie that you can skip. My children did not enjoy the movie at all. You may find the following offensive: In one scene, Charles Darwin writes in his diary that “I am going to die without getting to first-base with a girl”. Later, at a science convention, a scientist that invented a “hot air balloon” boasts that his machine will allow a guy to look “down” a woman’s shirt. This line gets repeated later on. In another scene, the Pirate Captain acknowledged similarities between Charles Darwin and his monkey, alluding to evolution. The Pirate Captain has a dream where he is tempted by Cutlass Liz—a very inappropriate scene for children.

The word “stupid” and “crap” gets used with great enthusiasm. Cutlass Liz kills two men with her sword, without blinking an eye. Then there is The Surprisingly Curvaceous Pirate, a female dressed up as a man. God created us male and female. Cross dressing doesn’t bring God any glory! The movie is filled with inappropriate scenes. There is also the very evil queen Victoria and her secret society club that eats rare or “extinct” animals—almost bizarre! Think twice before taking your children to see this movie.
My Ratings: Moral rating: Very Offensive / Moviemaking quality: 5

B. Chambers, age 40 (South Africa)
Negative—I asked the Great I AM to PLEASE forgive me after seeing this filth!!! There is a tremendous amount of violence and hate in this film. If any parent brought their child to see this film it would just break my heart. A father brought out his child because the child was so scared of what was on the screen. I felt I needed a shower after seeing this filth. There was a cross dressing pirate in this film. Please take your child and adults to stay home and be in the Living Word with your family instead!!!
My Ratings: Moral rating: Extremely Offensive / Moviemaking quality: 1½

Christopher West, age 43 (USA)
Negative—This was by far the worst movie I have seen in a very long time. Charles Darwin is one of the main characters! That says a lot about this movie, right there. Neither of my children laughed out loud, the entire movie. So, not only did I not find it funny, but they did not either. I would have walked out had I not been with others.
My Ratings: Moral rating: Extremely Offensive / Moviemaking quality: 3

Amber, age 30 (USA)
Comments from non-viewers
Negative—I saw the preview and realized it would not be like Wallace and Grommet or “Flushed Away.” After reading the review, I have no interest anymore. It probably could've been a good movie, bur it must've been really stupid. I am disappointing in DreamWorks, because their movies are usually really good
My Ratings: Moral rating: / Moviemaking quality: