for strong violence, bloody images, pervasive language, sexuality/nudity and some drug use. 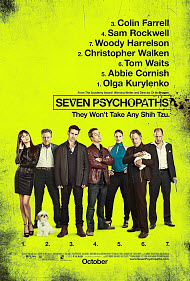 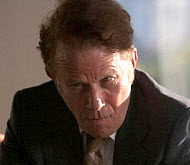 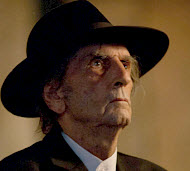 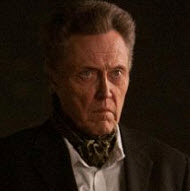 Here’s what the distributor says about their film: “From Oscar-winning writer and director Martin McDonagh comes a star-studded, blood-drenched, black comedy. Marty (Colin Farrell) is a struggling writer who dreams of finishing his screenplay ‘Seven Psychopaths.’ All he needs is a little focus and inspiration. Billy (Sam Rockwell) is Marty’s best friend, an unemployed actor and part time dog thief, who wants to help Marty by any means necessary. Hans (Christopher Walken) is Billy’s partner in crime. A religious man with a violent past. Charlie is the psychopathetic gangster whose beloved dog, Billy and Hans have just stolen. Charlie’s unpredictable, extremely violent and wouldn’t think twice about killing anyone or anything associated with the theft. Marty is going to get all the focus and inspiration he needs, just as long as he lives to tell the tale.”

I chose to review this film based on my desire to see Christopher Walken, who I think is a great actor and often very funny. I was hesitant, because of the R-rating, but I was willing to give it a chance. I hoped to give readers of this Web site a proper review, in case, like me, they were willing to overlook the rating and perhaps find the film’s quality worth it.

Less than 17 minutes into the film, I heard at least 17 uses of the F-word. D*mn must have been considered too mild, as I only noticed it once. D*ck once; c*nt once; b*tch once or twice; sh*t at least 3 times and a*s twice. Within this same 17 minutes, two throats were slashed by their owners, two would-be killers shot in the head, and two other bloody bodies were shown long enough to be disturbing.

All this took place, as I said, within the first 17 minutes, at which time I stopped watching. Whatever your moral or spiritual persuasion or position, even this amount of time was more than enough for me to tell you that there is no reason to watch this film, either in a theater or at home.

I would like to comment on the quality of the script, but how difficult is it to write the F-word countless times and refer to it as dialog. As far as plot is concerned, this is supposed to be the story of Marty (Colin Farrell) writing a screenplay. I’ll never know how well he played his part.

I did not stay with the film long enough to see any sex or nudity, but trust it will be there. The $1.31 I wasted to rent this DVD, although a small amount of money, was ill spent.

I hope that anyone considering renting “Seven Psychopaths,” or seeing it in a theater, will change his/her mind.

Positive
—…Although disturbing, the movie had great twists and turns of events. It was extremely well written, and I don’t think anyone could have predicted the ending. That makes a great movie.
My Ratings: Moral rating: Offensive / Moviemaking quality: 5

L, age 29 (USA)
Neutral
Neutral—This movie attempts to do what Quentin Tarantino does and succeeds at. They do succeed for the most part, but the movie does indeed start to drag, bore, and become pointless.

I will start by saying the movie was very well acted. I think each character was played off well. There was quite a bit of language, and the violence, although it wasn’t frequent, was graphic enough to make me cringe. The scene where Hans (Walkens) wife was killed was extremely sad, and they made fun of her Catholicism quite a bit before killing her. The movie ended quite bleakly ***spoiler*** with everyone but Marty dying ***end spoiler***.

I liked the idea for the movie a lot, and thought the plot was smart, but the movie is without a doubt for young people that have no moral compass whatsoever (I saw said movie for work).

Sexuality was also a problem, the sex scene isn’t graphic per-se, but the comments Sam Rockwell makes throughout it are inappropriate. There was a scene with a hooker (not having sex) with her top off, as well. All in all, what I’m trying to say, is if you’re willing to set all values away and enjoy a movie with sex, extreme violence, and strong language, rent 7psy.
My Ratings: Moral rating: Very Offensive / Moviemaking quality: 4

Adam R. Holz, Plugged In
…a rambling accretion of superviolent nihilist riffs that evoke Tarantino… Some of the film is fun for moviegoers… Still, the violence wears you down. Like one of its nutso characters, “Seven Psychopaths” has a death wish.

Joe Morgenstern, The Wall Street Journal
…This is one crazy bastard of a movie, but too many of its moments of let’s-subvert-the-genre seem to leave McDonagh stranded and flailing at just the moment when a Tarantino movie or a Chuck Palahniuk novel is snapping into place. … [2½/4]

Kyle Smith, New York Post
…But put a gun in the hands of Woody Harrelson and some glorious gab in the mouth of Christopher Walken—the most deadpan of deadpanning thespians—and it’s impossible not to make something of this profanity-flying conflation. …

Steven Rea, Philadelphia Inquirer
…7 psychopathically good performances… It’s the performances that hold the movie together when the crazed ambition of this enterpise threatens to pull it apart. …

Gary Thompson, Philadelphia Daily News
…this is a delightfully goofy, self-aware movie that knows it is a movie. … All of the actors are good… [3½/4]

Lisa Schwarzbaumm, Entertainment Weekly
…sporadically funny, blood-splattered comedy… Mr. McDonagh has written and directed a comedy of cruelty that’s predicated on the dubious idea that the spectacle of creative failure is comic (rather than absurd). That this is largely a lie, unless it’s Mel Brooks doing “The Producers,” should go without saying, and it’s instructive that Mr. McDonagh sells the lie slathered in blood, which suggests that there’s a great deal of boiling rage or maybe self-loathing beneath the jokes, the cake-and-eat-it-too attacks on women and movie allusions.