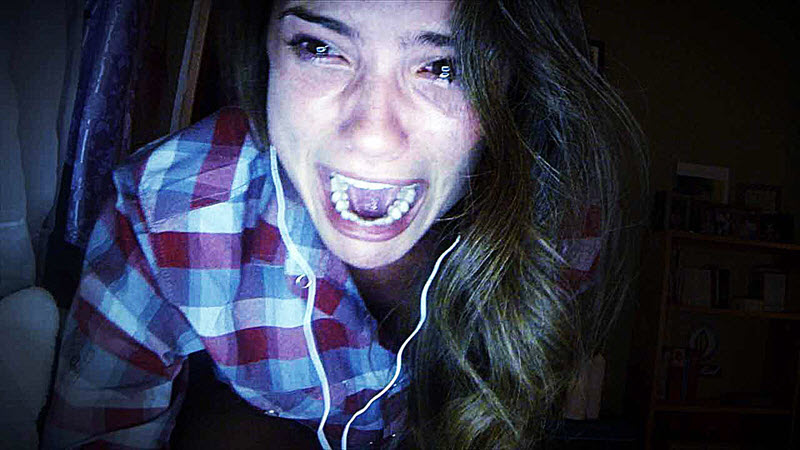 for violent content, pervasive language, some sexuality, and drug and alcohol use - all involving teens. 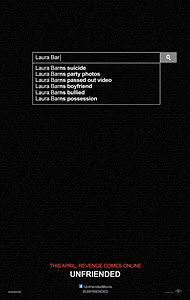 spending too much time on-line

“Revenge comes online / If you sign off you die”

It’s been a year since high schooler, Laura Burns, committed suicide after discovering herself in an embarrassing YouTube video someone posted. Even worse, somebody videotaped Laura Burns committing suicide and posted it on YouTube as well. Some people just don’t have boundaries.

One night, six friends—Blaire, Mitch, Ken, Jess, Adam and Val—decide to video chat each other on Skype. While chatting, they notice an unfamiliar user pop into the chat with them (no picture either). The user profile says her name is Laura Barns. “It’s obviously just a hacker,” the friends say. But as each of the friends try to hang up, each one of them ends up committing suicide, in some of the most horrific ways, I might add.

So the question remains, who is this user? A hacker or Laura, calling from beyond the grave.

Can you remember a time when Facebook, YouTube, or even the Internet didn’t exist? I can’t. The old, yet familiar cliché, “My gosh, what did we ever do before such and such” has never rung truer today. Let’s face it, we are glued to our technology, our TVs, our computers, our electronics. They can sometimes consume us.

Don’t get me wrong. Technology, when used appropriately, is a great tool (e.g., like reading this review). But there are times where it can be used in a more, shall I say, embarrassing or cruel manner.

“Unfriended” serves as a prime example of what can go wrong when cyberbullying occurs. While parts of this movie are fiction, the message is clear. Cyberbullying is just plain cruel and unacceptable. Don’t bully (cyber or otherwise) and don’t post things on the Internet you will likely regret later.

“Unfriended” isn’t so much scary, as it is a thriller, per se. While I appreciated the fact that “Unfriended” took its time to lead up to the scares, unraveling secrets in the process, it just took too long to get there. When the scares occurred, they were in a gore manner as opposed to “heart-racers.” Perhaps I was expecting something different walking in, or didn’t do my research properly as to what genre this was categorized as, but, to me, this film wasn’t terrible, but it wasn’t what I was hoping for, and, at the end of the night, it was a let down to its genre.

The performances were about average, with the exception of some humorous dialog thrown in every once in a while.

“Unfriended” had a lot of inappropriate content worth mentioning.

Violence: Heavy to extreme. Main characters are seen committing suicide in some very graphic ways (electrocution, shootings, and one involving sticking a hand in a blender). There’s a comment made about abortion. A picture is shown of someone hanging themselves.

Sex/Nudity: Heavy to Extreme. There is lots of inappropriate sexual talk. Blaire begins to undress but stops. We also see close shots of her legs and thighs. Blaire and Mitch make mention of their “first time” occurring at prom in the future. There is a reference made to pornography, as well as a male being “wet.” One character makes mention that someone sent pictures of another character’s breasts (we don’t see the pictures). Blaire implies (never fully types though) that Laura was raped by a family member as a child. During the embarrassing YouTube video of Laura, we see her in her panties and a shirt outside with blood coming out the back of her panties (close shot). Mitch is seen without a shirt. There are references to masturbation, and once a male’s private part briefly flashes on a girl’s computers.

As I said, the moral of the story is “don’t bully.” The bigger picture, however, deals with the idea of suicide. As a Christian, suicide is never an acceptable action, period. Committing suicide is like saying to God, “I’m not worth it.” This is contrary to the Word! We are worth it! God would not have sent his Son to save us if he didn’t think we were worth it.

“Even as he chose us in him before the foundation of the world, that we should be holy and blameless before him. In love, he predestined us for adoption as sons through Jesus Christ, according to the purpose of his will. —Ephesians 1:4-5

The Bible also makes it clear that when we find our life has no purpose or we feel our struggle is too great to bear, God will be close.

The Lord is close to the brokenhearted and saves those who are crushed in spirit. A righteous man may have many troubles, but the Lord delivers him from them all. –Psalm 34:18-19

As my sister and I left the theater this evening, she asked, “So, what do you give ‘Unfriended’? A yea or a nay?” My answer for this movie is, unfortunately, a “nay.” While “Unfriended” had some moments of true terror and a strong, clear message against cyberbullying (I must say that’s a first for a horror movie), I still feel it took too long to get to the scares, and, in essence, the point. Content-wise, it’s offensive: excessive profanity, graphic violence, and sexual content and dialog heavy. Don’t see it. But do remember this, our lives have purpose, have meaning, through the one man who made it all possible, Jesus the Christ.

Positive
Positive—I don’t know what movie the reviewer saw, but what I saw was something much better. “Unfriended” is a tense, expertly crafted, realistically acted, and unique thriller with an insanely high attention to detail. Not once was I bored. Not once did I feel the movie was starting to drag. The film slowly builds tension and conflict amongst its characters, as the killer becomes more and more aggressive with them, driving stakes through their relationships by exposing secrets and killing them off.

Like I said, the attention to detail is stunning. The skype call, computer desktop gimmick is flawlessly handled, immersing the viewer in a cybernetic thrill-ride unlike any other. The characters, while not particularly likable, are a stand-out for one reason only; they actually behave like real human beings, instead of the stock cardboard cutout caricatures so many horror films have bombarded us with in the past few years. Every action these characters take is so realistic, so true to life, that you’ll almost feel like you’re watching real humans instead of some movie in the theater. I found myself identifying with them throughout the whole thing, which is amazing.

Unfortunately, while “Unfriended” is perfect on the moviemaking quality side of things, it’s anything but all sunshine and rainbows on the content side. The violence isn’t too bad for this genre. There are a few kills, but each of them is seen in a distorted image. Also, only one of them is actually gory (the blender scene). Still, that one kill is mercifully short. Despite that one scene, the violence here is much less gratuitous and disgusting than most modern horror films.

The language, on the other hand… eh. Again, it’s not as bad as other modern horror movies. However, that doesn’t mean it isn’t still pretty bad. Characters start spewing f-bombs in rapid succession on many scenes (a few of them are used in a sexual context). Other milder profanities make their own appearances from time to time. A character is implied to be a stoner.

A short Skype call in the film’s intro shows two lovers partaking in a little racy flirting (the girl unbuttons her shirt, but we’re thankfully spared before she takes it all off). There is no nudity to speak off. We’re shown a brief (non-graphic) sex tape. The Laura Barns video shows her acting indecently with fellow party-goers.

Overall, “Unfriended” has its content problems, but it’s nowhere near as bad as most modern horror movies. Also, it boasts a terrific anti-bullying moral. The movie is expertly crafted and tensely entertaining the whole way through. However, if you go into this movie expecting to be terrified out of your wits, you’d best lower your expectations on that regard a bit (this is more of a suspenseful, tense thriller than a horror movie, despite featuring a few jump-scares).
My Ratings: Moral rating: Average / Moviemaking quality: 5