for some suggestive material, partial nudity and smoking. 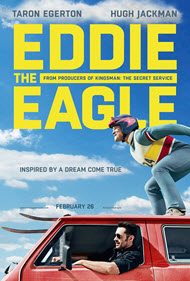 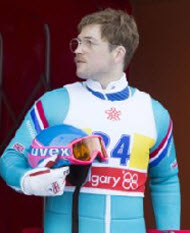 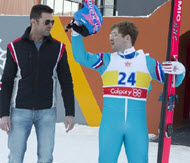 aiming high in our endeavors

This film is based on the story of Great Britain’s first ski jumper to enter the Winter Olympics, Michael Edwards, aka Eddie ‘The Eagle’ Edwards. His exploits made him the most famous ski jumper in British history. The film’s portrayal of Edwards’ never-say-die approach to the sport, celebrates the human spirit and resilience in the face of extraordinary odds and challenges.

During the 1988 Winter Olympics in Calgary, Canada, Edwards became a national hero by becoming the first competitor to represent Great Britain in Olympic ski jumping. He was a particular dark horse to achieve this placement, since he had no funding and his farsightedness forced him to wear glasses under his goggles, making him virtually blind during the jumps. The press nicknamed Edwards ‘Mr. Magoo,’ and even though he placed last in the 70m and 90m ski-jumping events, he was hailed as a heroic failure.

The film follows Eddie from childhood to adulthood as he tries to achieve his dream of becoming an Olympian. Eddie endures a painstaking trial and error phase, where he searches for a specific Olympic event that would help him achieve his goal. After being told over and over that he is not Olympic material, he stumbles upon the Olympic ski jumping event. Great Britain had not had a ski jumping team for some time, and Eddie saw an opportunity to achieve his dream of finally becoming an Olympian.

Eddie makes his way to Germany to learn how to ski jump. This is where he finds coach and future friend, onetime American ski jumper Bronson Peary (Hugh Jackman). Peary is a man that is haunted by the fact that he never reached his own potential in the sport that he loved, and spends most of his time drinking to forget about his past. After seeing Eddie repeatedly try and fail on his own, Peary takes an interest in trying to help him achieve his dream. Together Eddie and Bronson work to overcome many obstacles that are in their path to the 1988 Olympic Games.

“Eddie the Eagle” is an uplifting film about never giving up on dreams—even when it feels like we will never achieve what we set out to do. Eddie proves to himself, his family, his country, and the world, that when we are determined to reach a goal, it is possible, as long as we do not give up on it. This follows the same classic underdog model that we have seen before in inspiring sport movies such as “Rudy,” and “Cool Runnings.”

Violence: There is mild sport related violence that is seen throughout the movie and one bar fight.

Smoking/Drinking: Hugh Jackman’s character is a heavy smoker and drinker, and other characters in the movie are seen drinking.

Sexuality/ Nudity: There is one portion of the movie where Jackman’s character describes in some detail how ski jumping is like making love to a woman. There is also a sauna scene where one of the ski teams is not clothed. Nothing graphic is shown, but the audience can tell that they do not have on clothes.

As Christians, we can look at Eddie’s story as the way we should approach our walk with God. It is a time old metaphor that we are to be like Olympians that are determined to finish the race, no matter what is standing in our way. Eddie was determined not to let anything stand in the way of his goal to become an Olympian. As Christians, should we not be the same in our pursuit of our Lord?

Do you not know that in a race all the runners run, but only one gets the prize? Run in such a way as to get the prize. Everyone who competes in the games goes into strict training. They do it to get a crown that will not last, but we do it to get a crown that will last forever. Therefore I do not run like someone running aimlessly; I do not fight like a boxer beating the air. No, I strike a blow to my body and make it my slave so that after I have preached to others, I myself will not be disqualified for the prize.

As followers of Christ, we should be determined to reach our end goal, and the prize that waits for us, which is far greater than any Olympic metal. “Eddie the Eagle” shows us an example of what a determined man can achieve in the world when he puts all he has toward his dreams. What can we achieve when we put all we have toward our walk with Christ?

Positive
Positive—“Eddie the Eagle” was an outstanding movie about overcoming odds and settings goals and not letting set backs get to you. His mom and coach were very supportive of him, but his father was not, but became supportive at the end of the movie. It showed how important it was to have encouragers in our lives. It also showed that people that have major problems in their lives can be helpful.

Eddie’s trainer is an alcoholic, but he still has positive qualities about him. After I left the theater, I tweeted Hugh Jackman about what a good job he did as an actor in this movie. Don’t know if I will hear from him or not. The man who played Eddie also did a superb job. Unless he had a stunt man, he took a lot of hits in falls coming down the slopes.

Overall, the movie was fantastic! There was also a segment before the film started where the two lead actors thanked the audience for taking the time and spending the money to come to the movie!
My Ratings: Moral rating: Excellent! / Moviemaking quality: 5

Bill Boylston, age 57 (USA)
Positive—I quite enjoyed this movie and found it very inspiring. For many, Eddie embodied the true Olympic spirit. Living in Canada, I was particularly interested, because of the Olympics being in my home country. I also met him when we took our students to see him practice in 1988. The actor does a very good job of presenting his mannerisms accurately, as he seems exactly the same as he did in real life. The film has some very good special effects and has a good message of overcoming the odds and never giving up.

There is really only the one offensive remark, with the analogy of ski jumping being like making love, and a few swear words, including God’s name and the a-word. Eddie is presented as a moral person who normally doesn’t drink alcohol, because it disagrees with him, and instead drinks oyster milk. He does drink alcohol once in the film, as the result of a prank by his teammates, and it does indeed cause him to pass out. There is a warning on this film because of smoking and drinking by one of the main characters. I’m very easily offended, but was not offended by this film.

I had no idea of all that he overcame to become an Olympic athlete. It’s interesting that after all the fame he achieved, that he later became a lawyer. He really is an example of a person who achieved a lot in his life because of his high level of motivation, willingness to take risks, and the fact that he never gave up.
My Ratings: Moral rating: Average / Moviemaking quality: 4

Kathy Pj, age 55 (Canada)
Positive—I did not know the story of the British ski jumper, known as Eddie the Eagle, so the story was interesting for me. It would have been better had the “bad” guys in his life who were trying to trip him up and turn him away not been depicted in such a shallow and stereotypical fashion. However, Taron Egerton, who plays the lead, and Hugh Jackman, who ends up as his reluctant coach, put in fine performances, and they are the substance of this movie.

The message of pursuing your dream and not giving up no matter how many people try to discourage you is indeed uplifting. Eddie is also presented as a person with high moral standards. It was sweet to see his loving parents, played very well by British actors, Jo Hartley and Keith Allen.
My Ratings: Moral rating: Average / Moviemaking quality: 3½

Halyna Barannik, age 69 (USA)
Positive—My husband loved this movie from beginning to end. Taron Egerton was just delightful playing the part of Michael Edwards (Eddie). Hugh Jackman added a lot to the film, as well. The setting was beautiful, set in the mountains with the high jumping slopes. You really got a feel of how really amazing this sport is!

The only trouble we had with the film was Hugh Jackman’s explanation of jumping being compared to making love. It was pretty graphic in his explanation and that made us uncomfortable. If my sons see it at home, we will skip that part! Overall, we were delighted with the film. Very inspiring!
My Ratings: Moral rating: Better than Average / Moviemaking quality: 5