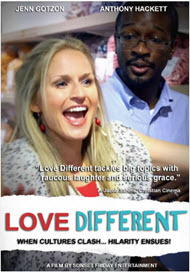 love—“not everyone needs the same kind of love”

Here’s what the distributor says about their film: “Lindsay Walker, a Caucasian woman who grew up in a small, all Caucasian town, gets a job at an African American consulting firm and finds herself in a complete culture shock!

Through their hilarious and eye-opening journey together, they both come to understand even more than they signed up for.”

Positive
Positive—I got to see an early preview of this movie and enjoyed it. Found it very funny and had me thinking at the end. JESUS himself loves us each a little differently. He responded one way to the pharisees and another way to the woman at the well. Jesus loved them, but we are individuals and respond in different ways. This movie mainly deals with people coming together though they are from different worlds. Hats off to Jenn GOTZON, an awesome actress who has played in some other Christian movies I recommend like DOONBY. ANTHONY HACKET keep making movies and keep making us laugh.
My Ratings: Moral rating: Excellent! / Moviemaking quality: 4

Rockinron Corino, age 53 (USA)
Positive—I truly enjoyed this film!!! I love the fact that the actors spoke in today’s vernacular. The sentiments addressed were truly heartfelt. The acting was true to life. The message was very clear, not confusing. The movies boasts of being hilarious, and it captures that wonderfully. I will share this movie with anyone who desires to watch it. Thank you for a fantastic element of Christian entertainment with a meaning !!!
My Ratings: Moral rating: Excellent! / Moviemaking quality: 4½