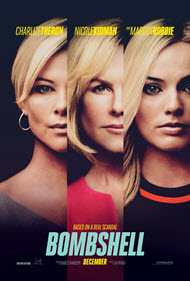 Allegations of sexual harassment in the workplace

The sinfulness of sexual harassment

Political motivations for producing some films

The movie’s jabs made against Conservatives and Christians

What differences are there between the actual facts of the case and the way it is presented in the movie? Is the audience in a position to separate fact from fiction?

Leftist Hollywood’s ongoing attempts to take down, discredit or change Fox News to their liking

Here’s what the distributor says about their film: “Starring Charlize Theron, Nicole Kidman, John Lithgow and Margot Robbie, based on the real scandal, BOMBSHELL is a revealing look inside the most powerful and controversial media empire of all time; Fox News, and the explosive story of the women who brought down the infamous man who created it. Directed by Emmy® Award winner Jay Roach and written by Academy Award® winner Charles Randolph.”

The film centers upon female Fox News personnel and their allegations against founder Roger Ailes. Told from the viewpoint of women, the film dramatizes accusations of sexual harassment and a toxic male culture. As a result of Gretchen Carlson’s lawsuit, other women such as Julie Roginsky made similar claims, and Ailes resigned from Fox News in 2016.

Secular Movie Critics
…there’s a whole lot of fiction in this based-on-real-events tale… Jay Roach’s fictionalization of the sexual harassment scandals at Fox News has all the makings of a sharp, satirical takedown in the vein of Adam McKay’s “The Big Short” and “Vice.” …
Richard Roeper, Chicago sun-Times
…a subversive dramatization of Fox News’ toxic culture… If there’s a criticism to be made of “Bombshell,” it’s that it doesn’t go far enough in telling us what Ailes definitely did… in “Bombshell,” people such as O’Reilly, Kimberly Guilfoyle and Jeanine Pirro come across worse than others.
Mick LaSalle, San Francisco Chronicle
…preachy… not that subtle… “Bombshell” takes us behind the scenes for Fox’s “War on Women”… The laughs may be a little too easy — dressing ANYbody up as Geraldo Rivera is a cheap guffaw — and the messaging too pointed and lopsided to appeal to every viewer. …
Roger Moore, Movie Nation
…The film by Jay Roach — the “Austin Powers” director who’s had rotten luck with dramas — clips along and is always watchable. But it misguidedly mimics other annoying, ripped-from-the-headlines movies, such as “The Big Short” and “Vice,” that rely on Elvis-impersonator acting, smug narration and quick cuts. …
Johnny Oleksinski, New York Post
…As often occurs with topical tales, which are hellbent on catching a widespread mood (in this instance, anger and disgust), there’s something hasty and undigested about “Bombshell”… the action is relentlessly sliced and diced. …the over-all narrative feels hasty and undigested…
Anthony Lane, The New Yorker
…A disingenuous #MeToo movie… “Bombshell” is most effective when it’s focusing on Robbie’s Kayla, the only character actually invented for the movie, and thus doesn’t come with any real-life baggage. …
Brett Arnold, Consequence of Sound
…sneakily political, fact-adjacent drama… Like many freely fictionalized docudramas, “Bombshell” creates a new character for audience-identification purposes. The third protagonist is a bright if naïve Fox production assistant with ambitions. This “millennial evangelical” conservative Christian, named Kayla Pospisil, becomes friend, confidante and lover of another invented character, a Fox staffer who’s a discreet lesbian…
Michael Phillips, Chicago Tribune
…beginning with a single-minded script and clumsy direction — a movie with a compelling story to tell turns into a blunt-force polemic that can’t stop hammering its message home. …
Joe Morgenstern, The Wall Street Journal
…fizzles like a dud… Huge dollops of deceit undercut both the credibility and even the message… The minor but…outrageously preposterous fake character…Fox News producer Jess Carr (Kate McKinnon), a closeted lesbian liberal with posters of Hillary Clinton in her kitchen. That’s how desperate the makers of this movie apparently were to inject someone they could present as the voice of reason among what they regard as all of the automatically reprehensible right-wingers at Fox. She even manages to seduce a female Fox true believer into joining her in bed — because if you’re not real in the first place, absolutely anything can happen. Right? …
James Dawson, The Federalist
…It does cartwheels to make a vile tale compelling, and it can feel like a parade of starry impressions rather than something genuine…
Jake Coyle, Associated Press
…overpacked and unwieldy and often disconnected…
Elizabeth Weitzman, The Wrap