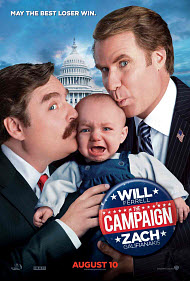 “May the best loser win.”

Since I have started doing movie reviews for Christian Spotlight on Entertainment I have gone to see many movies that I wouldn’t normally see; “The Campaign” is one of those movies. A character in the movie has a catchphrase that he uses in his campaign, and it perfectly describes this film; “It’s a mess.”

The movie centers on Cam Brady (Will Ferrell) a four term US Congressman who is running for his fifth term unopposed. After he leaves a sexually explicit message on a family’s answering machine, his poll numbers begin to slip. A pair of businesmen brothers, the Motch Brothers (Dan Akroyd and John Lithgow); determine that they can find a candidate who can beat Brady in an election. They turn to an associate of theirs son, who is a little awkward.

Marty Huggins (Zach Galifianakis) is a family man who only wants the best for his family and his community. Marty is approached by his Dad (Brian Cox) to run for Congress against Brady with the financing of the Motch brothers. Marty accepts the offer and begins his campaign against Brady. This is when Marty’s social awkwardness and Cam’s cocky headstrong self confidence begin to play off each other and lead to comedy situations.

Morally and spiritually, there is not much to this movie. During a debate, Marty challenges Cam’s claims that he is a Christian by challenging him to recite The Lord’s Prayer, which Cam does not know. Cam begins to butcher the recitation, while his campaign manager Mitch (Jason Sudeikis) pantomimes the words charade-style. The whole scene is reprehensible and very offensive. Later, Marty and Cam go on a religious tour with Marty, offending a Jewish congregation, and Cam attends a “snake handling” church to prove he has the Spirit—and ends up being bitten by a snake.

Morally, some of the things that these two men do to one-up each other reach farcical levels. Cam is arrested for driving drunk and stealing a police car. He also punches a baby and dog, as well as total infidelity in his marriage. Marty, after an infidelity incident between his wife and Cam, shoots Cam in the leg. All of these things happen with tons of cameras present and end up on many cable news shows.

It would be wrong of me not to point out that Marty is not as morally reprehensible as Cam, he does have some redeeming qualities. He forgives his wife for her drunken indiscretion with Cam; he also turns down the Motch brothers’ money, when he discovers their plans for his district. Marty is the better man, in comparison to Cam, but he does stoop to Cam’s level when it comes to dirty politics.

In my opinion, this movie had a lot of potential to comment on our political system, but fails in lieu of ridiculous jokes and farcical situations. There is not a lot to take away from this movie. Will Ferrell is basically playing his Ricky Bobby character from “Talladega Nights: The Ballad of Ricky Bobby,” with a touch of Ron Burgundy from “Anchorman: The Legend of Ron Burgundy, although not as funny as either character, which, in the case of Burgundy, wasn’t really that funny. I also noticed that halfway through the movie the laughs from the audience stopped. At one point, the attempts at humor just became too much.

I would not recommend this movie to any Christian. There are no redeeming qualities in any character, except for the ones that Marty displays. The Lord’s Prayer debate scene alone is enough to make anyone walk out, if you can make it past the raunchy sex references and foul language displayed in the introduction of Cam Brady and the message he leaves on the family’s answering machine. Overall, I would not recommend this movie to anyone. If you are in need of a good comedy, this is not the movie you should see.

Negative
Negative—I am ashamed that I let my kids see this movie. I am also ashamed that my husband and I saw it, too. I do not recommend this movie to anyone. I knew seeing this movie, knowing it was rated R and had Will Ferrell in it, I expected “the mess” in it, but still went… I am so ashamed. The summary this web site gives, sums the movie up perfectly. They left out all the sick language and sexual content. Why can’t movie makers do that, too.
My Ratings: Moral rating: Extremely Offensive / Moviemaking quality: 5

Lynda, age 43 (USA)
Negative—DO NOT see this movie. I do my best to avoid relatively garbage quality media, but this one is over the top. I normally love Will Ferrell and was so disappointed by the humor and general writing, aside from the extreme crudity. It’s not the same type of humor as even “Anchorman” or “Taladega Nights,” etc.; its more along the lines of Step Brothers and seems to have just continually gotten worse. We walked out about ½ through, total waste of time and money.
My Ratings: Moral rating: Extremely Offensive / Moviemaking quality: 1

Lindsey B, age 27 (USA)
Negative—I really liked the plot of this movie and the acting. Zach did a great job playing an effeminate tourism center director and sweater-vest-wearing family man. Will Ferrell was also great as a sleazy politician. His spin of the bad phone call was hilarious (it was only .00001 percent of all the good phone calls he has made). Will Ferrell is a great comic actor.

This is a bad movie from a Christian perspective. The language is foul. Adultery is dismissed. The children”s confessions are grotesque and unbelievable. I left halfway through. Please remember that only a small handful of politicians are corrupt. The vast majority are honorable and smart. I tire of hearing the comment, “They’re all (corrupt, adulterous, only out for themselves, etc.)”. It’s just that the corrupt few get all the media attention.
My Ratings: Moral rating: Very Offensive / Moviemaking quality: 3