for rude humor, some suggestive material and mild peril. 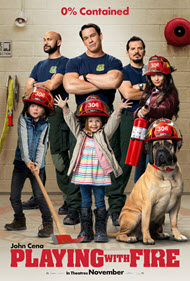 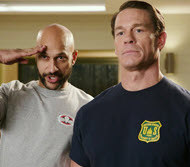 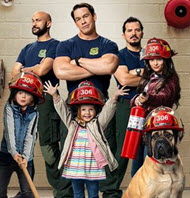 Trying to live up to one’s family legacy

Stealing—a Humvee and an ATV 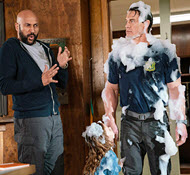 Caring for orphans / about ORPHANS in the Bible

About ADOPTION in the Bible

The importance of kindness / mercy / tenderness 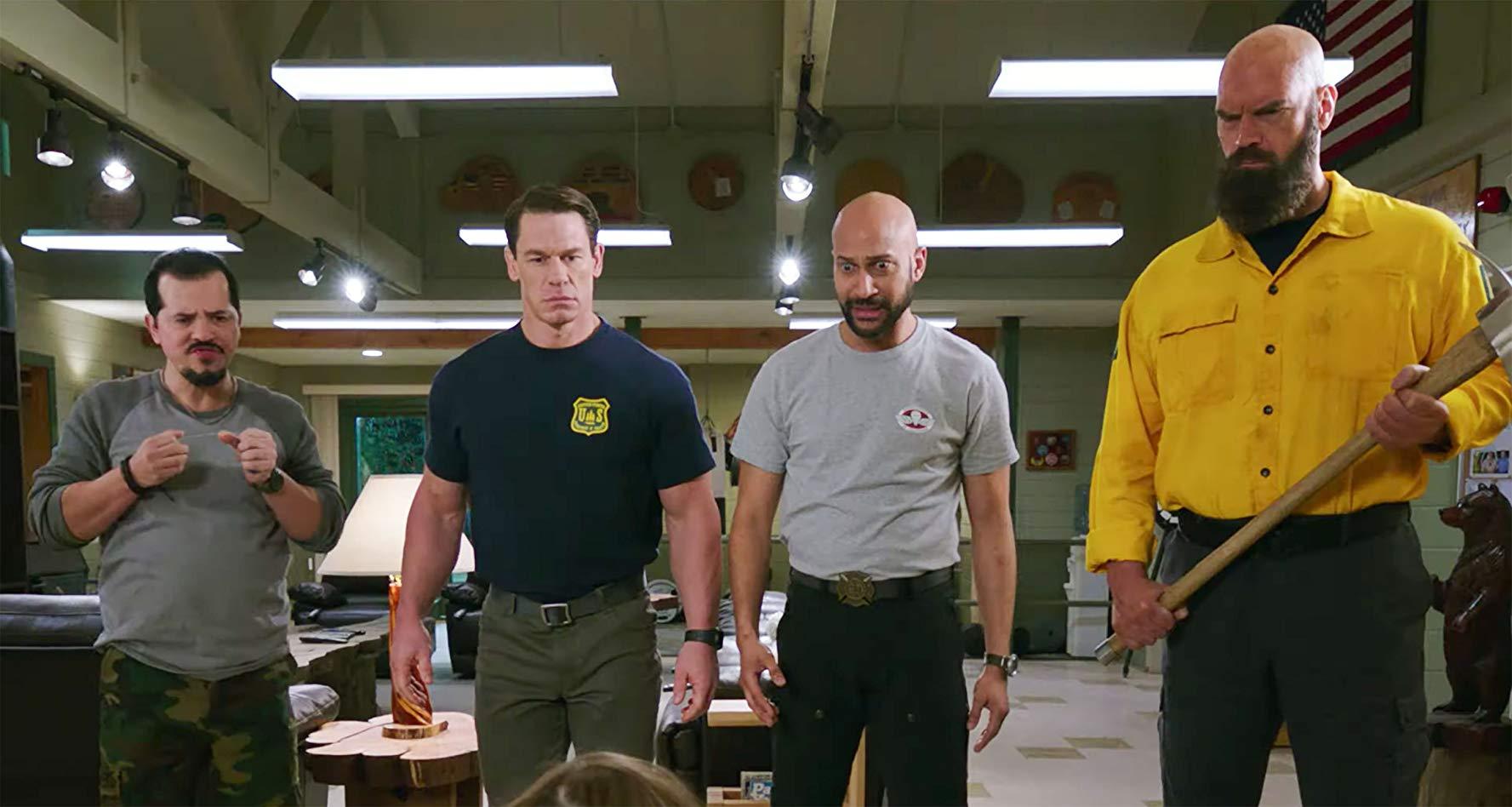 Superintendent Jake “Supe” Carson (John Cena) is a man who was raised by a Smoke Jumper to be a Smoke Jumper. Raised in the station house he currently commands, Jake Carson is straight-forward, no-nonsense leader who lives to fight forest fires. He lives by the book, and there is only one way to do the job—by the book. His station house is about training and training—again and again—to ensure preparation for the very worst situation. He dreams of becoming a Division Commander, a job his deceased father once held.

Without giving away much of the plot, this well-run and efficient station house ends up rescuing three siblings and must care for them until their parents arrive to claim them. Mayhem results as the movie mixes children with smoke jumpers for laughs and some changes in characters as the movie draws to a close. John Cena’s role is in the mold of other action actors like Arnold Schwarzenegger (“Jingle All the Way”) and Vin Diesel (“The Pacifier”)—among others—who changed things up in a comedy based around children.

The production has beautiful scenery and is well done. I appreciated the fact that the Smoke Jumpers are not made fun of, but are respected for what they do.

There are a few instances where the material is questionable. I was apprehensive as the movie continued in the genre of all the adults being buffoons, while the kids are smarter than the adults—with the humor coming from the children interacting with the “by the book” Supe and his crew. One of the children is directly disobedient and disrespectful toward the crew, and causes mayhem and damage in the station house.

There is bathroom humor, and a quick shot of a poster with a woman who is scantily dressed. There is a scene where the female scientist, Amy (who had dated Supe) sees him in a mirror as he changes shirts, and she lingers while looking at him (a caution—Matthew 5:27-28 tells us about lusting by looking, and that we have already committed adultery in our hearts). There is also a scene where a rescued woman tells Supe that her husband is dead and asks him to take her with him—while her husband is really standing there with her. There is also a joke about Amy spending the night at the station after Supe invites her to dinner. I appreciated Supe say that this would be inappropriate. There is peril when a Humvee is stolen and almost falls off a cliff.

There is plenty of slapstick humor—soap bubbles turned dangerous, an attempt to extract Supe from a burning cabin, and a scene where the parking lot has a slippery substance that causes everyone to slip and slide. There is a nail gun and a flare gun used in humor, but no one is hurt. There is also a scene where the children steal an ATV and physically run into Supe—but he is only stunned, not hurt.

I appreciated that there is only a single use of “God, yes”—and no blasphemy or vulgar language. There is a single scene with alcohol, but it is not consumed in the movie—only hinted to. The youngest child has a couple of scenes where poop jokes are made, and they go on and on.

As I mentioned above, the children are defiant and rebellious without any deference to the Smoke Jumpers—in fact they intentionally defy and disobey the directions of Supe and the crew. All of this is for laughs, causing the adults to look stupid while the children look smart.

There were no references to faith in the movie.

If you go to “Playing with Fire,” you’re not expecting to see a masterpiece of cinema like “The Ten Commandments” or an Alfred Hitchcock movie. You know what you’re getting into, and I will admit the movie had its very funny parts where I was laughing out loud. I appreciated the change in the characters from the beginning to the end (no spoilers) and did appreciate the focus on family and friendships.

I recommend the movie with the caveat that it is a movie with a lot of humor, some questionable bits, and without any references to God. One will have to discern whether a movie without any reference to God is worth of your time and your finances. If you need a bit of time where you can relax and not have to worry about foul and vulgar language, then this movie will give you a laugh and that’s about it. I will reference Colossians 3:17, where we are told that whatever we do, in word or in deed, do all in the name of the Lord Jesus, giving thanks to God the Father through him.

Neutral
Neutral—This movie was a huge letdown. The trailer showed the only funny parts, and the acting was nothing short of goofy. The ending was about the only part worth watching, even though it was easily predictable. There was only a modicum of laughter throughout the entire movie. Weak script, bad acting, not worth the money.
My Ratings: Moral rating: Better than Average / Moviemaking quality: 3

Dennis, age 66 (USA)
Neutral—I just saw “Playing with Fire,” and I felt that only the last 15 to 20 minutes were okay. The script is very cliché, the pacing is poor, and everyone knows what’s going to happen based on the trailer alone. For the most part, there are good messages about children growing up and maturing, and there are messages about adults learning to give patience and adopting children. There were a few things that did irritate me, though.

1. In the opening fire-rescue, an adulterous woman offers to leave her husband to be with the fireman. Granted, the fireman does not take her away, but the scene really irritated me. The only good thing about it was her husband showed annoyance at his wife’s adultery. True, no sex happens, but her desire alone was enough to anger me. I’m only glad the husband does not approve and the fireman does not take the woman away. All the writers had to do in this moment was have the woman be single and ask the fireman out on a date and that would have been much better than adultery in the heart.

2. There is a gross drawn-out diaper change scene that was really unnecessary. All I am saying about the rest of this scene is my stomach hurt in a way that not even “Ren and Stimpy” could dream of.

What did fix some of this movie for me was the explanation that the kids were orphaned, that’s they had no guidance. I know God wants us to care for the orphans and this plot point makes me understand that we need to be patient, kind, and gentle with children who have no positive guidance in their lives and teach them in a way that pleases the Lord.

In the end, aside from the two things I mentioned, this movie is fine in terms of morality. If you enjoy it more than I did, that is fine. John 3:16, Romans 10:9, Acts 16:31.
My Ratings: Moral rating: Average / Moviemaking quality: 3

Peter, age 29 (USA)
Neutral—This movie was a major disappointment. I expected humor. It was dull. It was predictable, but that would have been fine if it was funny. The attempt at humor fell flat, the teenage girl was just snarky and couldn’t pull off the big sister, caregiver roll. The youngest child was supposed to be a toddler I guess. She was too old to be in diapers and say one word sentences like “play” or “ mom.” When she cried it was a tantrum, not a little girl who needs a bedtime story. The love interest was forced. All around, it was a huge disappointment.
My Ratings: Moral rating: Better than Average / Moviemaking quality: 2½