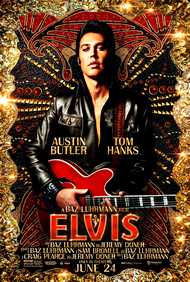 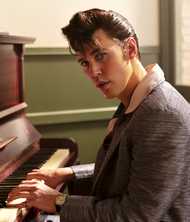 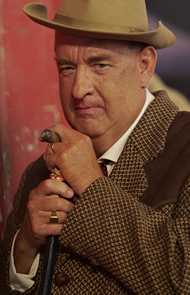 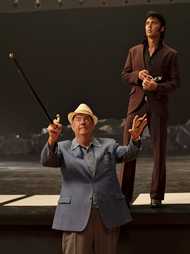 Life of Elvis Presley and his relationship with Colonel Tom Parker 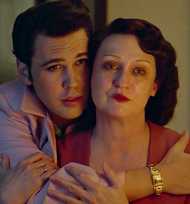 Alcohol abuse by a mother

A father who fails to properly manage family finances, leaving the family in serious financial peril

About MUSIC in the Bible 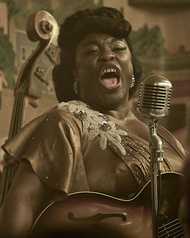 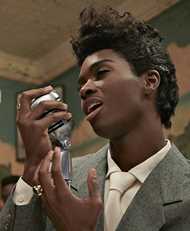 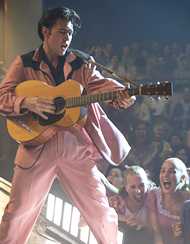 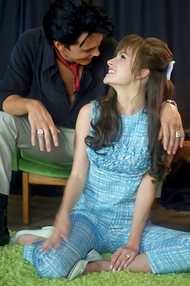 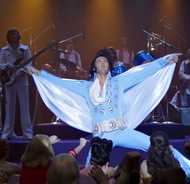 Before he was the King of Rock and Roll, Elvis Presley was a young boy getting his musical beginnings in the small rural town of Tupelo, Mississippi. When he was 13, he and his family moved to the big city of Memphis, Tennessee and that’s where our story starts. For you see, Elvis grew up with a love, not just for the church and the Lord, but for music, specifically the music of the South such as Gospel, Rhythm and Blues, Blues and Country.

Our story begins with a young Elvis Presley having just completed his first recording with Sun Records and about to perform live. As he walks on stage, at first glance, to the audience, Elvis doesn’t look like anything special; in fact he looks kind of weird to them: his hair is too long, he wears baggy clothes. But then Elvis takes a step back, takes a breath, and begins to sing. As Elvis sings and his vocal cords move, so do his legs and hips. All of a sudden, the girls in the audience start screaming and going crazy! “What are they all screaming about?” Elvis asks. “It’s the way you’re moving,” a bandmate says.

The teens aren’t the only ones in attendance that night. Colonel Tom Parker (Tom Hanks), a manager (of sorts), is watching in earnest after hearing Elvis’ recording played on the radio earlier. As the Colonel watches the girls going crazy, the Colonel realizes Elvis is someone he needs to promote and work for.

So the Colonel and Elvis meet. Elvis is excited at the prospect of being able to bring his music to others and be able to provide for his family. The Colonel promises him he will be able to do that and will help get him records, movies and even television.

There have been very few musicians, very few people in fact, who have had as impactful a legacy as Elvis Presley. Elvis profoundly redefined older forms of country, gospel, and rhythm and blues for an entire generation. At the time of Elvis’ existence, rockabilly (a combination of rock and roll and country) was losing much of its audience. Elvis took the musical parts of all of these types of music and brought them together (the guitars, the upright basses, the drums, the dancing). Elvis also broke the barriers of “musical segregation” allowing for both white and black audiences, for the first time in perhaps decades, to appreciate and enjoy the same type of music.

“Elvis” is a brilliant, cinematic film that, as the REAL Priscilla Presley, Elvis’ ex-wife, stated, accurately depicts and honors the late musician with the respect he deserves. The film begs to ask the question, “Who was Elvis the MAN? The man you saw when the show wasn’t going on?” The movie doesn’t try to depict the real Elvis anymore than a musician doing his very best to give his fans the best performances he could, struggles and all (and boy, did he have struggles as many of us know). As Director Baz Luhrmann said in a recent interview

The manifestations of Elvis are prominently displayed by actor Austin Butler. The amount of time, dedication and research that went into Mr. Butler’s portrayal of Presley is clearly displayed on screen—as this will, without a doubt, go on to be one of the finest performances of his career. In the same interview I watched, a reporter states that Mr. Butler spent “2 years studying every musical aspect of Elvis’, all of Elvis’ mannerisms, traits and characteristics.” While he isn’t able to copy Elvis 100% musically (no person can), he comes very close (especially in the vibrato, or vibrations, to his sound).

Additionally, Tom Hanks puts in, once again, a stellar performance as Colonel Parker. The challenge for Hanks was how little he knew about the Colonel. He wasn’t called to play a stereotypical villain; anyone could have done that. He needed to be so much more. As Luhrmann states,

“If Shakespeare was looking to take on a historical character now, you couldn’t go past the idea of the Colonel and Elvis,” Luhrmann adds. “The Colonel is like Falstaff with a chainsaw. Because Shakespearean villains are never just a bad guy. Colonel Tom Parker absolutely did diabolical things. But he also did extraordinarily genius things. So everything is a paradox and a coin flip. That’s what makes him so delicious.”

Lastly, the camerawork is very well done. Close ups are expertly crafted at the most opportune moments, such as when Elvis is looking out windows. Panoramic shots allowed me to really feel like I was viewing the audience from on stage, or backstage, and actually felt like I was at the concerts with Elvis. A job well done by the production team.

There are some things that are to this film’s detriment. As much as the camerawork is to be admired, it can also be a problem, particularly when it focuses TOO MUCH on Elvis’ hip thrusting and leg movements. Additionally there’s a serious language issue with the film (including a f-bomb) that really bring the film down. Lastly, there is some hip-hop music thrown into the film (like there was in “The Great Gatsby”) that really isn’t necessary.

VIOLENCE: Elvis is seen being dunked in water to wake him up. There is a fight between teens and police officers during a concert. Someone dies. We hear about the assassinations of Martin Luther King and Bobby Kennedy (we also hear the gunshot on TV while Ted Kennedy is assassinated). Someone tries to attack Elvis. Someone, hallucinating, shoots a gun in a hotel. A man collapses on the floor and is given morphine enroute to the hospital.

SEXUAL CONTENT/DIALOG: A young Elvis witnesses a couple Black church members dancing suggestively which are the moves he later uses and exaggerates in his concerts. As I said, there are many camera shots of Elvis’ thrusts and leg movements in the film. A mom mentions to someone that Elvis is “forbidden fruit.” Girls are seen throwing panties at Elvis on stage a few times. One character says that Elvis’ dancing makes girls want to “f*** Elvis” (the word is cut off). A character and his wife kiss a couple times. Elvis kisses a few girls in front of his wife during a concert. Elvis undresses a young woman and sex is implied.

NUDITY: Women are seen in some revealing outfits (bikinis and some cheerleaders in a short outfit). A character is seen with a woman wearing lingerie.

ALCOHOL: A character is an alcoholic and later dies from her addiction. There is some drinking at parties.

OTHER: “Colonel” Parker earns the nickname “Snowman” because of the many dishonest snow-job manipulations he pulls (“pulling the wool over someone’s eyes,” pulling a fast one without the victim realising they were being separated from their money). He does this to everyone around him, including his business partner Hank Snow and an aware-but-susceptible Elvis himself. Parker is a heavy gambler and is driven by his growing debt to push Elvis harder in spite of the man’s failing health. In fact, Col. Parker manufactures things at every turn to keep Elvis doing what he wants him to. It’s suggested that Parker’s nixing of the Star is Born film project, later in Elvis’ life, kept him from rejuvenating his career and cleaning up his drug habit.

The life of Elvis is an incredibly sad example of someone who came from a Pentecostal Christian upbringing, with a musical gift given from God, but allowed some of his fame and glory—glory that was meant for God—to corrupt him.

Fame is a fickle, fleeting thing. It comes and it goes. What is popular today will certainly not be tomorrow and what is certainly popular tomorrow won’t be popular five or ten years from now. Yes, Elvis’ music certainly brought joy to some, for a time, but what else could he have done with that fame? Was he ever going to have enough or BE enough for anyone, or would people always demand more?

The Bible has much to say, particularly when it comes to fame, fortune and glory.

For “All flesh is like grass and all its glory like the flower of grass. The grass withers, and the flower falls” —1 Peter 1:24

For what does it profit a man to gain the whole world and forfeit his soul? —Mark 8:38

All fame, and glory and all credit belongs to God!

Prisicilla Presley stated in an TV interview that if Elvis were alive today that THIS would be the movie he’d want to envision. I’ve pondered that claim. If Elvis were alive today, would this be the movie he’d want to have written about his life? At times, I believe it is. The music is well done, the acting is spectacular, and the cinematography is fantastic.

There are other times, though, where, like with the language and the sexual content, that if Elvis were alive today, he’d have some questions of his own.

As for a recommendation, I’d advise each individual and parents to use strong discernment using the information I’ve provided before they view “Elvis.” Some of the sexualized dancing and language will be enough to deter Christians from seeing this movie. I definitely do not recommend this film for children.

Positive
Positive—I saw the movie Elvis based on generally good reviews. I was not prepared for how powerfully the movie told the story of Elvis Presley, who died young at age 42. Despite a slow, slightly choppy start initially, when the screenplay addressed the black music roots of Elvis’s song and performing style, the film developed into a powerful and vivid depiction of the popular rise of Elvis and his complex relationship with his manager, Colonel Parker. The performances by Tom Hanks as Parker and Austin Butler as Elvis are among the best embodiment of historical figures I have ever seen. Tom Hanks was almost unrecognizable initially as Parker and the casting of Austin Butler as Elvis was a stroke of genius. He looks like Elvis and performs like him. The footage at the end of the film of the real Elvis performing shortly before his death helps close this ultimately tragic story. Elvis’s gyrations while performing on stage are part of his trademark and I thought they were essential and appropriate for the movie. I walked out of the theater stunned by how strongly this biopic told the story of a unique American popular singer. Recommended for mature audiences only.
My Ratings: Moral rating: Average / Moviemaking quality: 4½
Halyna Barannik, age 76 (USA)