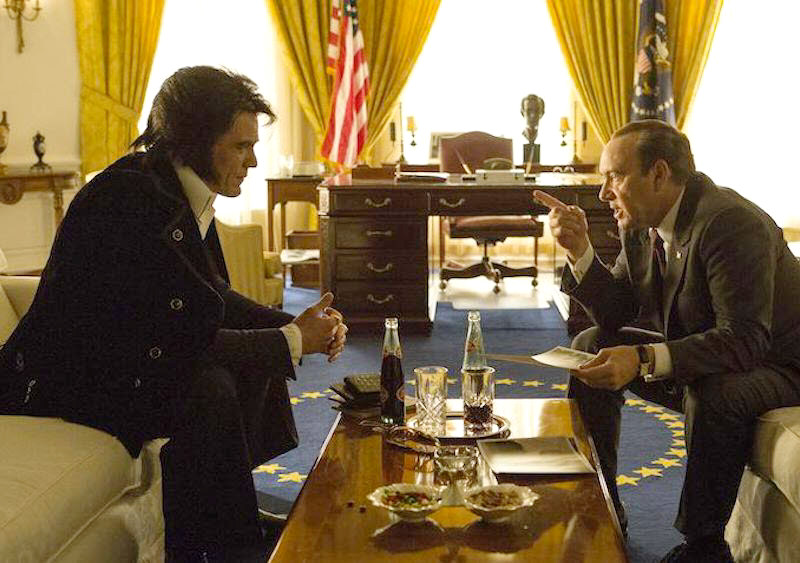 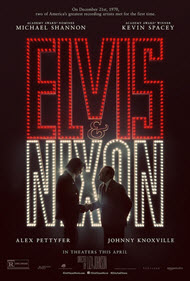 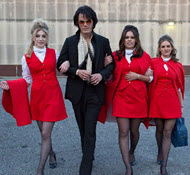 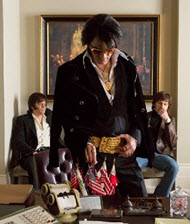 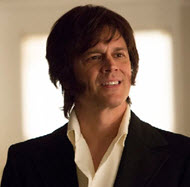 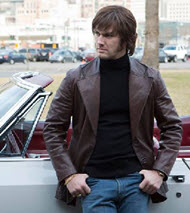 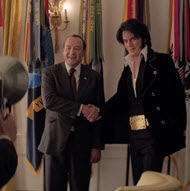 “Elvis has entered the White House”

Here’s what the distributor says about their film: “‘You’ll never guess in a million years who just showed up at the Northwest Gate asking to see the President.’

The untold true story behind the meeting between the King of Rock ‘n Roll and President Nixon, resulting in this revealing, yet humorous moment immortalized in the most requested photograph in the National Archives.

‘Elvis and Nixon’ follows two men at the height of their powers, conscious they could not stay on top forever, both ripped with fear of the inevitable, sharing one famous private moment in the Oval office.

The meeting was initiated by Presley, who wrote Nixon a six-page letter requesting a visit and suggesting that he be made a ‘Federal Agent-at-Large’ in the Bureau of Narcotics and Dangerous Drugs. Presley brought with him family photos and a Colt 45 pistol as a personal gift to the President.

The film recounts the morning of December 21st 1970, when the Elvis (Michael Shannon) shows up on the White House lawn to request a meeting with the most powerful man in the world, President Richard Nixon (Kevin Spacey). He had a very urgent request: to be sworn in as an undercover Federal Agent at large. This intimate moment in the Oval office between two men at the height of their powers has never been told.”

Movie Critics
…While its sense of humor takes some gettin’ used to, the sheer spaciness of Liza Johnson’s stranger-than-fiction political satire ultimately proves its greatest asset, simultaneously demystifying two 20th-century icons—one the most powerful, the other the most popular man in the Western world at the time …

Peter Debruge, Variety
…The pleasure of watching Shannon and Spacey—together and separately—is key… The filmmakers embellish, by necessity, the specifics of the conversation, and what each man was thinking and feeling before, during and after the encounter. That’s where the problems creep in…

Stephanie Zacharek, Time
…It ain’t fact, but it is d*mn entertaining fiction. …

Peter Travers,·Rolling Stone
…They never bother engaging with why Elvis arranged this meeting. They just invite us to giggle that he did. …

Gersh Kuntzman,·New York Daily News
…the film is a comedy and not a “real” look at its subjects. But good comedy has something subtextual under its hood, so to speak, and “Elvis & Nixon” appears uncomfortable with the resonances that bubble up…

Chuck Bowen, Slant
…Divertingly daffy, this comedy-drama features a disarmingly off-kilter performance from Michael Shannon, who plays Elvis Presley as both tragic figure and irrepressible goof. But the movie’s irreverent, unassuming tone eventually starts to feel like a crutch: “Elvis & Nixon” is so superficial and cutesy that it proscribes greater emotional undercurrents. …