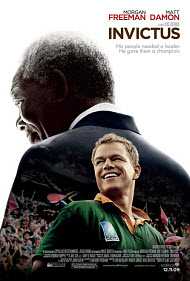 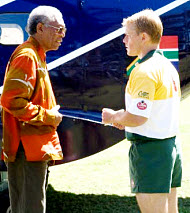 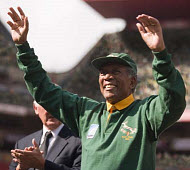 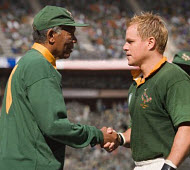 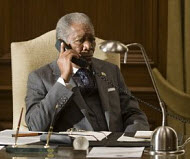 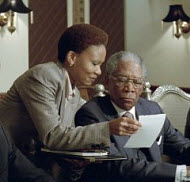 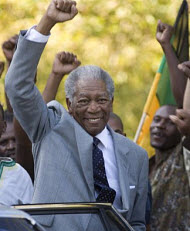 Movie review: “From One Blood: The Story of Gerrit Wolfaardt” (2003)

“His people needed a leader. He gave them a champion.”

It matters not how strait the gate,
How charged with punishments the scroll
I am the master of my fate:
I am the captain of my soul.

Those are the last four lines from “Invictus,” an 1875 Victorian poem by William Ernest Henley. The word invictus is Latin for ‘unconquerable,’ which should be no surprise considering it was the very word and poem that guided Nelson Mandela through 27 years of life in a South African jail cell. While from a Christian standpoint the poem is theologically incorrect, as we are not the captains of our own souls, it strengthened a man who changed himself before he changed a nation for the better. The film “Invictus,” directed by Clint Eastwood, details the amazing true story of how Mandela as President of South Africa helped bring racial unity to his country through the 1995 World Cup of Rugby.

From 1948 to 1994, the country of South Africa was under apartheid (Afrikaans word meaning ‘separateness’) which segregated the white and black races of the country. Under apartheid the South African government segregated everything from health care to education to governing bodies. Black South Africans no longer were considered citizens of the country and therefore couldn’t vote in any elections. Nelson Mandela was arrested for inciting riots during apartheid, including teaching guerilla warfare, as well as organizing bombings. He was classified a terrorist and rightly so, because even though his cause was just, he went about making change the wrong way. He was imprisoned for 27 years, and, at the end of apartheid in 1994, South Africa held their first ever general elections with open voting to all races. Nelson Mandela won the election, becoming the first ever black President of South Africa.

With his victory, the race that had been outcasts thought for sure that their new leader would get revenge during his regime: hire an all black staff, make new laws favoring black South Africans, and change the nation’s colors. They were astounded when Mandela did none of these things, but, instead, pushed for unity and equality. Mandela realized that forgiveness was his biggest weapon. He was able to look at those who arrested him and put him into prison and forgive them for what they had done.

Mandela took great interest in the country’s Rugby team. Considered a sport played by predominantly white South Africans, Mandela saw it as a chance to reach out to unify South Africa before they hosted the World Cup in 1995 that would be seen by over 1 billion people across the world.

In “Invictus,” Clint Eastwood deftly portrays this story, blending a strong sports movie with historical epic. He makes you care immensely not only about the characters, but also about Rugby, a game which is played by very few here in the states. Of course, it didn’t hurt that he had the talents of Morgan Freeman and Matt Damon as his leads.

Freeman (“Shawshank Redemption,” “Million Dollar Baby”) was the natural choice to play Mandela, and he does so with his usual gravitas. Maybe it’s because such a venerable actor was playing such an iconic historical figure, but I wasn’t overwhelmed with Freeman’s performance. It was serviceable, but ultimately a thankless task. Damon (The “Bourne” series) as the captain of the South African Rugby team, however, was top notch.

I was also very happy with the content of the film. There was one use of heavy language, but aside from that the film fit comfortably within the PG-13 rating. From a Christian standpoint, there’s a great biblical lesson of forgiveness. “Invictus” portrays the redemption of an entire country starting with the redemption of one man. Until Mandela realized he was wrong and that he had to forgive, he couldn’t change. It was this same lesson that he taught South Africa. While the natural reaction was hatred, once people were willing to forgive, they also were willing to change. It’s a powerful lesson from a powerful film.

Positive
Positive—What an uplifting film! I don’t know what liberties the director took with the actual story, but focusing on “forgiveness” as a way to bring the country together truly sends a powerful and positive message to all who watch this movie. I loved Morgan Freeman as Nelson Mandela and hope he garners an Oscar nomination. Don’t miss it!
My Ratings: Moral rating: Good / Moviemaking quality: 4

Reba, age 40+ (USA)
Positive—“Invictus” is an excellent film to see if you are into true stories. Although not a “Christian” movie, it is a very inspiring movie and very well made. Clint Eastwood’s best yet. There is very little profanity, and what there is goes by quite quickly in the context of playing rugby. Morgan Freeman does a great job of portraying Nelson Mandele and his amazing ability to forgive his jailers and inspire his country to rise above their own racism against the Appartied whites. Very good support by Matt Damon as well. I think people will be surprised by the emotions they feel when viewing “Invictus.” I was. It was just plain good directing. You should see it.
My Ratings: Moral rating: Better than Average / Moviemaking quality: 4½

Marc, age 46 (USA)
Positive—My son (14) and I watched this today, and I was very impressed. There is one offensive word, but it comes and goes so quickly I hardly noticed. The basis of the movie is around Nelson Mandela and how his desire is to see a divided nation unite. He wants this country to overcome racism with forgiveness and a common love for their country. This is one of the best films I have seen in a very long time.

Nelson Mandella spent almost 30 years in a prison cell that he could barely spread his arms across and comes out ready and willing to forgive those that put him there. This is such an amazing true life example and respresentation of what our Saviour has done for us. I highly recommend this movie!!
My Ratings: Moral rating: Better than Average / Moviemaking quality: 5

Tyla, age 32 (Canada)
Neutral
Neutral—This story made me remember what Mandela stood for. Knowing the direction the country is currently steering in (South Africa), it felt good to remember the unity and forgiveness that overwhelmed the country during Mandela’s presidency. He was, after all, the only black president, the only black leader, as a matter of fact, that did truly and honestly support the rugby team, too. Today, we’re back at square one… sadly… and only God can steer this country away from disaster.

Mandela’s inspiring story has gone nowhere. His people have forgotten. Black hatred rages like a fire (killing and torturing of whites with kettles, irons, golf clubs, pangas, etc. happens daily and doesn’t even get into the papers anymore).

Pray for the godless people of our country please! Mr. Mandela’s spirit lives in us. Hopefully, this movie will awaken the treasure of unity in our people again.
My Ratings: Moral rating: Good / Moviemaking quality: 4

Comments from young people
Positive—I loved this movie. It was very uplifting and inspirational and I’d be willing to watch it again and again. One interesting thing, though. The movie has a heavy theme of self-reliance, while we Christians should be God-reliant. So it is therefore an outstanding movie, but it is rather secular. But they do mention needing God’s help to win a rugby match. The only objectionable thing was some infrequent inappropriate language. Matt Damon’s character and his girlfriend have a short kissing scene, but nothing more on-screen. So the run down on the film? Great film, kind of secular, but awesome nonetheless. What are you waiting for? See Invictus!
My Ratings: Moral rating: Better than Average / Moviemaking quality: 5