for violence, language, some sexuality and nudity 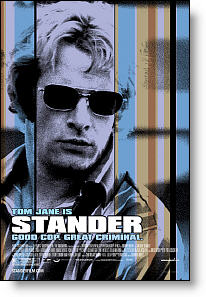 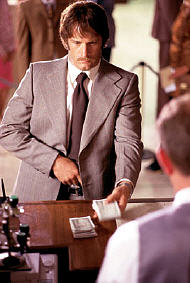 Taking a stand for your beliefs may bring you trouble, especially if your beliefs cause you to defy your job, your country, your best friend and even yourself. These are precisely the obstacles facing our leading man in “Stander” when he converts himself with Robin Hood reasoning from police captain to chief criminal. But the little good he accomplishes is overrun by wrong and results in his demise.

Based on the real life of infamous South African Andre Stander, this film begins in Johannesburg in 1976 where Stander is forced to serve on riot duty. While at a nearby township with other officers, fighting breaks out and Stander ends up killing another man. Fed up with his “duty” and the politics of his country, Stander not only forfeits his job, but turns bank robber to help less privileged people. It seems the most logical choice for Stander would be to conform to the powers of the ruling class and enjoy a nice life, but something in him refuses to concede.

Something to note regarding the content of this film is that there is some partial nudity, violence and profane language. Some backside and frontal nudity occur with Stander while running on the beach with his wife on their honeymoon. There is a passionate scene with Stander and his wife, too, that ends up being curtailed. The foul language isn’t extreme, but there are moments where it is a bit heavy, including repeating the “f” word and taking the Lord’s name in vain. Gunfire occurs throughout, with about three moments showing someone being wounded. There is also one scene involving a severe beating.

This story clearly sets out to grapple with some of the issues of apartheid and the conflict between the people and the ruling powers of South Africa. In a way, Stander is an apologetic character trying to make up for all of the ways people have been wrongfully treated in that country. While mulling over why he killed the man at the township, Stander’s dad offers him false solace saying that if they don’t control the people, the people will kill them. Stander offers a rebuff, saying, “Maybe they’re not like us.”

Beyond his mindset, Stander also puts action to his ideas. The most rewarding scene is when Stander doesn’t purposely endeavor to break the law, but instead makes a decisive choice to face up to his homicide. Having found the name of the man he killed, Stander locates his family and confesses to them what he did. In a fundamental way, this is like what people did during the Truth Reconciliation Commission (TRC) in South Africa after apartheid ended in the early 1990s. But since Stander (at least in this movie) was acting way ahead of his time, the result of his confession isn’t nearly as safe.

The quality of the filmmaking is superb. There is a lot to appreciate in how director Bronwen Hughes was able to capture the look and feel of the late 1970s in the art direction as well as in the film stock. The acting comes off extremely natural and quite simply never gets in the way. This is excellent work from South African filmmakers. It is another refreshing film that is not overly produced but simply out to tell a story well.

There are things to admire in Stander standing up to injustice and taking action to right wrongs. His courage in the face of difficulties is inspiring, but his tactics aren’t always exemplary. Like Butch Cassidy and the Sundance Kid or Bonnie and Clyde (which are both referenced in this film), this tale highlights the result of lawless living and rounds it off with poetic justice.