Paws of Fury: The Legend of Hank

for action, violence, rude and suggestive humor, and some language. 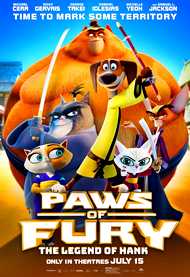 Dog in a land of cats

Wanting to become a samurai 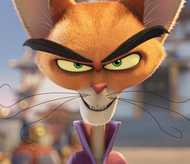 What is LYING? What are the truly BIG lies of our world?

PRIDEFULNESS—What does the Bible say about pride and HUMILITY?

Importance of treating others kindly and as more important than oneself 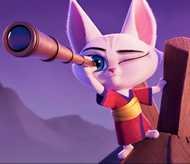 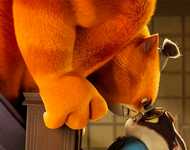 Hank is a dog in a cat’s world, both figuratively and literally. But I’m getting ahead of myself. Let me set the scene for everyone…

Our story takes place in Kakamucho, a town filled with cat citizens who are watched over by a cat samurai. However, the problem is the citizens have no samurai and are at the mercy of a band of ninjas that like to come in and reach havoc and chaos. Who can they call upon to choose the samurai?

Well that would be the warmonger Ika Chu (Ricky Gervais). He is in charge of the entire region. He has a plan of his own, however, and that is to rid the town of all of its citizens so he can claim the land and destroy it using his ultimate weapon, his giant toilet! But he needs to choose a samurai so unskilled, so unlikeable that he’ll abandon his post quickly, and then Kakamucho will be Ika Chu’s for the taking.

That’s where Hank comes in. It just so happens that Hank is traveling from the Dog’s Island to the Cat’s Island when he is captured by Ika Chu’s soldiers and imprisoned. Ika Chu offers him a choice: serve as the samurai of Kakamucho or be executed. Looks like Hank doesn’t have much of a choice.

“Paws of Fury…” is a story of strength, determination and finding your inner “cat.”

2022 has been a fairly promising year for animated films. We’re only slightly over half way through the year, and we’ve had some solid animated features this year, such as “Minions: The Rise of Gru,” “Sonic the Hedgehog,” and even “The Bad Guys.” While content-wise, they are not squeaky-clean (it’s rare to find an animated film that is these days), they do contain some heartfelt messages that resonate with both the young and the young at heart.

This brings us to “Paws of Fury…”. For those who may be unaware, Hollywood legend Mel Brooks plays a small role in this film as the Shogun. He is also a Producer. I mention this because within the first 30-45 minutes, adults in the audience are going to recognize subtle and not so subtle references to a VERY familiar Mel Brooks film from the 1970s (a Western involving Gene Wilder) which I will NOT give away here.

I will state, however, that for those who are familiar with the Western I’m referencing, that movie had some very risqué and inappropriate moments. While “Paws of Fury” does not goes as far as that Western does with regards to the sexual content or language, you can tell that some of the humor in “Paws of Fury” shares resemblances to that of the Western.

From a cinematic perspective, however, I found “Paws of Fury” to be an about average film. It neither excites, nor bores, it just is. The animation is just about standard for what I’d expect from Nickelodeon studios and Paramount. The pacing is just about right, as well.

On another note, the most commendable aspect is the performances. There are moments the characters are aware that they are in a movie (again, a call back to the Western), and break the fourth wall (talk to the viewers, etc.), which was humorous to some of the adults during the afternoon screening I attended.

VIOLENCE: Most of the violence is either cartoonish or action-like in nature. Nothing is graphic. Some moments to be aware of include the Shogun and ninjas fight in the title sequence. Ninja cats are seen terrorizing a town (again, nothing graphic and it’s brief). A dog’s execution is stayed. A dog is hit with a pan as he’s running. A ninja uses a cat’s head as a punching bag. A dog is punched out. A dog is about to be mugged but the muggers are beaten up by a samurai. In a sequence, we see Hank receiving many different types of injuries while he receives his training. A horse is punched lightly and falls over, causing the other horses to fall over. There is a fight sequence between Hank and a Sumo Cat. Ninja cats terrorize a town again (we see some buildings burn). There are a couple more fighting sequences. A bird is blown to pieces by a gunshot. Young cats are pulled into rapids but are saved. We see some different types of weapons of mass destruction.

LANGUAGE: There is a possible “Oh my G*d,” a possible “dang it,” and a swear word is censored out in written form. Other words include “What the flush,” “Dog-gone it,” “dong,” “Idiot,” “Brainless,” “Someone just cut the cheese,” “Sucks,” “What the mother father cocker spaniel is going on here?”. There is also a lot of discussion about beating up and killing the new samurai.

SEXUAL CONTENT/SENSUAL MATERIAL: A female tells a male, “You look hot.” We see a cat finishing up going to the bathroom on the ground (rakes up the spot). A cat gives Hank a kiss. Hank is stopped from marking his territory.

ALCOHOL: A cat is drunk on liquid catnip a couple times. Partying cats are seen drinking catnip from martini glasses later on.

OTHER: Ika Chu’s weapon is a giant toilet bowl. Someone changes a sign from “pop” to “poop.” There is a brief sequence where cats are farting. There are some moments where characters talk about how it “makes sense to hate dogs” and some light underlying messages regarding immigration and racism. A curious cat looks directly into the barrel of a gun. A cat apologizes for his friends accidentally being “spayed and neutered.” We hear the words to the song “Gangnam Style” briefly. One of Ika Chu’s army members is dressed like Jason Boohrees (the masked villain in “Friday the 13th”).

When Hank first arrives at Kakamucho he receives a very unfriendly welcome, simply because he is a dog in a cat’s world. Hank has to learn how to adjust and find friendship in the unlikeliest of places and hope that the cats will in turn look past what they see on the outside.

A good discussion point for parents with young children might be that God is not human, he is far superior and looks beyond our exterior features. He looks at our motives, our desires and our willingness to live for Him. As Jeremiah heard from God,

“I the Lord search the heart and test the mind, to give every man according to his ways, according to the fruit of his deeds.” —Jeremiah 17:10

“But just as we have been approved by God to be entrusted with the gospel, so we speak, not to please man, but to please God who tests our hearts.” —1 Thessalonians 2:4

Even if we don’t find acceptance in this world, God is enough.

“Paws of Fury…” brings a sense of nostalgia with it that will likely amuse adults more than the children, which I’m still undecided as to whether or not that is a good thing. I can’t deny there are some messages regarding honor, commitment, and friendship that children might benefit from. Yet, the content, particularly the large amount of potty humor, is less than to be desired. Overall, parents of young children should be cautious.

As for a recommendation, truthfully, I’d say “Paws of Fury…” isn’t the worst choice, it just isn’t the best choice (although the current release “Lightyear” is far worse). Teens will definitely be bored by the film. Ultimately the choice is yours.

Secular Movie Critics
…It’s a decently-animated, dialogue-heavy comedy that manages a few laughs from the age-old sight gags of “Blazing Saddles” and a lot of groaners that pass for one-liners. …[1½/4]
Roger Moore, Movie Nation
…relentlessly silly but only intermittently funny…
Frank Scheck, The Hollywood Reporter
…It’s “Blazing Saddles” meets “Kung Fu Panda,” minus the laughs and the fun… “Paws of Fury” is an efficient yet underimagined animated fable that barely musters the flavor of a cliché Western comedy. …
Owen Gleiberman, Variety
…Where “Paws of Fury” shines is in its voice acting…
Katie Walsh, The Wrap
…While “Paws of Fury: The Legend of Hank” kept its narrative and setting well-structured, it contained scenes that dragged. I think it could have reigned its story in by cutting about 10 minutes of the slow beats or extended gag humour. …
Ridge Harripersad, CG Magazine