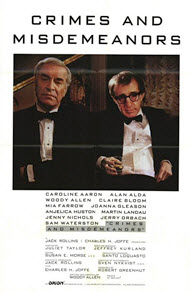 This Woody Allen movie is one of his most thought provoking works. Humanistic pessimism is pervasive throughout the movie and shows “real life” in the non-Christian world. However, this movie’s lack of ultimate hope has led me to a deeper understanding for those with whom I come into contact.

This movie has several storylines that are interwoven by characters interacting with each other through their connections to the Manhattan Jewish community. Woody Allen plays the part of Cliff, an unsuccessful documentary film maker whose marriage is failing. Lester, Cliff’s brother-in-law (Alan Alda), is a successful Hollywood film producer that gives Cliff a break by letting him make a documentary of Lester’s life. However, Cliff’s insane jealousy of Lester leads Cliff to create a comic documentary showing a womanizing and power hungry Lester—Cliff is fired. Cliff also is thwarted at his attempt in an affair when Lester marries the woman Cliff is chasing.

The second story involves a crisis of faith for Judah (Martin Landau), a successful physician that had been reared as an orthodox Jew. After several years in an illicit affair, Judah’s mistress decides that she is going to expose the affair to Judah’s wife. Judah panics because he is convinced that his Jewish wife will leave him on the biblical grounds of adultery and that his privileged country-club life will end. Judah calls his shady brother Jack (Jerry Orbach), and they decide to murder the mistress. Judah’s crime causes him extreme anguish, because he was taught “thou shalt not kill,” and that murderers are always caught. When he is not caught, he rejects his religious upbringing—his beliefs are shown to be superficial.

This movie reveals the daily thoughts and actions of those without Christ. There is one moment of violence in the movie when someone is murdered through strangulation. The movie leaves the viewer with the idea that people are not always punished for their evil deeds, since the movie seems to reject the Bible’s teachings on judgment (Hebrews 9:27 “And it is appointed unto men once to die, but after this the judgment”).

Positive—This is certainly one of Woody Allen’s best dramatic movies. It is thought-provoking, poignant, and bizarrely funny at times, especially the “documentary” he makes about the Alan Alda character! Ten years after its' release, it is still very much worth seeing. The Woody Allen character teaches us that sometimes things do not go well for those that are good. That Martin Landau’s character gets away with murdering his mistress teaches us that some escape judgment (though not our consciences) in this world. I highly recommend this excellent movie.