for teen alcohol and drug use, and for language. 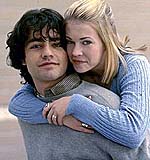 This movie is well titled. “Drive Me Crazy” may do just that for some parents. Based on the novel “How I Created My Perfect Prom Date” by Todd Stasser, “Drive Me Crazy” is your standard-fare high-school-dance film. You know right from the start that the movie will end at the big dance.

Not suprisingly, most of the audience were young, female teens. Certainly the target audience in mind. The film is built around the popularity of Britney Spears and Melissa Joan Hart (TV's “Sabrina, the Teenage Witch”).

There are many themes that may drive you crazy: the teen alcohol abuse, the typical PG-13 language (one use of the “f” word and several sexual innuendos), plus the portrayal of all of the main characters coming from broken homes. In the home of one character, actor Stephen Collins of TV’s “Seventh Heaven” plays the role of a deadbeat dad. This was a disappointment for me as I admire his role on television as a loving husband, father, and Reverend. In one scene, another father confronts Chase (the lead male teen character) about his drug use, but does not put a stop to it. Instead, he condones it as long as he knows about it.

Adrien Grenier and Melissa Joan Hart in “Drive Me Crazy”

“Drive Me Crazy” may best be viewed through the eyes of the character Dave (Mark Weber). I would not applaud his use of cyber-dating, but he does establish some values to the film. In other positive aspects, designated driving is strongly encouraged, and the message of abstinence is suggested in relationships. Perhaps the best part of this predictable movie is the issue of self-image problems explored, something that is very real in youth culture.

I would encourage parents to either attend this film with your teen (as I did), or view it separately with a following discussion with your teen. It can be lukewarmly recommended, with notice taken to the above reservations.

Positive Elements: Although many of the teens drink in the film, designated driving is upheld. Nicole is upset that her dad (her parents are divorced) is hardly ever in her life. One guy tries to force himself sexually on his girlfriend but she refuses to cave in. Most importantly, the movie shows that the most popular people aren’t always the people that really care about you and that being “cool” shouldn’t mean that you act like someone you’re not just to please them.

Spiritual Content: None Crude or Profane Language: There were many profanities in the film, the most notable was the multiple use of the s-word. God’s name was misused once and there was one use of the f-word. Sexual Content: Ambigious. Nicole, in trying to talk Chase into going to the dance with her tells him, “If you’re stupid enough to ask (what you’ll get out of it) I’m not going to bother to tell you.” Nicole’s “friend”, Alicia, tells one guy that Nicole is “mostly talk and no action but I’m action.”

Drugs/Alchohol: It is insinuated that that film’s lead male character, Chase, is on drugs. He acts and dresses like the drug crowd. Most of his friends dress and talk like druggies and they all hang around dark seedy coffee houses where there aren’t any adults. However, you never see him taking any drugs. There is a lot of teen alchohol use in the film. The film neither condemns nor upholds it but seems to remain neutral.

Violent Content: While trying to protect a girl form her drunk boyfriend Chase’s friend, Dave, is beaten; when the boyfriend once again tries to attack the girl she sprays him in the eyes with what was probably pepper spray.

Other Negative Elements: Some girls wear slightly revealing clothing. You see Chase vomiting after he drank too much and see it again on video tape. At the very end of the film Nicole’s mom and Chase’s dad tell them that they are going to move in together. You see Nicole in her bra, once while she’s getting ready for bed and once when she wakes up.

Summary: Although not the best family film the theme of DMC is one that many young people need to learn, that you shouldn’t compromise who you are just to be part of the “in” crowd. I am a teenager that went to see this movie with a friend. I thought it was funny and entertaining. Although the language is a bit excessive at times it was very similar to the way my friends and I talk. However, I won’t be dragging my younger sister with me to see it any time soon. My Ratings: [3/5]

Kathleen M. Andrulli, age 13
Christian music groups in the soundtrack… It’s a girl-teen comedy, I guess. Very predicatable, and light weight. But, I think the highlight for christians is the inclusion of Plumb’s song “Stranded” in the sound track, and it’s given a good 2 minutes in the movie! Plumb is a Christian group that I would recommend to anyone, espically in that age group. I’ve read of people going out and finding their album (which is pretty evangelical) because of the movie! Also on the movie soundtrack are Christian groups Jars of Clay, Silage, and Mukala. My Ratings: [3½/3]

Justin, age 22
While this movie does present a positive message about designated driving all the other elements of this movie which the reviewer mentioned (teenage drinking, sexual innuendo, and foul language… among other things) are enough for me NOT to recommend it at all. In addition, the movie itself seems to be a very lame attempt to reach teenagers and is trying to play off of the success of some of its predecessors (“She’s All That” and “Never Been Kissed” for example). This movie was not totally boring, but it’s not even close to being even good. …I think it’s unfair to put an actor, such as Stephen Collins, in a box and expect him to play only good, wholesome kind of characters. I was not disappointed at all because I have seen several interviews with him and I also know for a fact that not only has he played even worse characters in movies and on TV but he’s also a writer and has written some not-so-wholesome books, so I know he’s not the “good Reverend” kind of person in reality. His character in this movie was a “deadbeat dad” kind of role but his character did learn from his mistakes. In any case, this is not a movie I would suggest for adults or teens, especially if you’re looking for good entertainment because you will be disappointed. If you like Melissa Joan Hart then I guess that will get you to the theater but don’t expect to have a warm, fuzzy feeling leaving this movie because it won’t happen.

Sherry, age 31
I saw this movie and I thought it was great! No sex, a little kissing but that’s it! I loved it. I walked out of the movie theaters fealing relieved that I didn’t just waste money seeing a movie full of trash. I encourage anyone that is interested in seeing a movie, that you won’t have to walk out of in the middle, to so see this one!