for terror violence/gore and language. 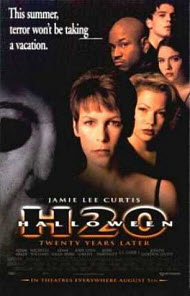 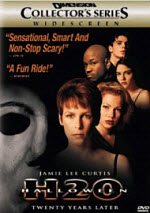 Horror films are dangerously hip these days. A substantial minority group of young adults cling to their six or seven dollars waiting at the box office in anticipation of swishing blades, screams, crunching and just plain terror. For those infatuated with blood lust and adrenaline pumping scenes, “H20” serves up a good, yet modest amount.

The story is extremely simple (as if story was important anyway in a Halloween movie). Laurie Strode (Jamie Lee Curtis) went into hiding after her diabolically evil brother, Michael Myers, tried to kill her years ago after he escaped from a mental home on Halloween of 1978.

It is now 1998. Laurie has been in hiding for years as a teacher of a boarding school, while raising her son John.

Unfortunately, her past returns to confront her. Myers is not about to let Laurie get away this Halloween, nor her son. Along Michael’s way lives are lost, people are chopped, stabbed, and one is even hung from a light fixture as a jackolantern. Later to be found by John and a young girl, who I assume will need therapy in the near future.

“H20” is crude. Sexual talk is not discrete, swearing is mild, and gore… heh heh… runs about without restraint. Morals to the story? There are none. Except don’t attempt premarital sex or Michael Myers'll kill you. All of which is nicely wrapped up in the credits popular song by Creed, “What’s This Life For?” This seems to be the theme of the film.

Why then would so many be driven to see carnage candy? Possibly most teen viewers have loads of problems, guilt, social pressures, and fears hovering over their heads and find it a good way to vent by sitting still and watching someone just try to live without social restraint. Would not our busy lives be simpler if all we had to do was fight Michael Myers? Another reason for such huge turn-outs on opening night could just be for the mental roller-coaster ride.

View at your own risk. You know and I know what to expect from a movie that has a theatrical trailer in which a narrorator says in a dark scary voice: “This summer terror won’t be taking a vacation,” which is followed by the swooshing of an axe and a really scary musical chord. Enter title card: H20. Rated R, imagine that.

If you wanna get scared in an highly unrealistic movie then Halloween H20 is for you… I would also highly consider the content before letting younger teens see it. It does contain numerous profanities not as much as you would excpect from a horror movie, but still it has a good share of them. The violence is very gruesome including knives, ice skates, guns, and other weapons…