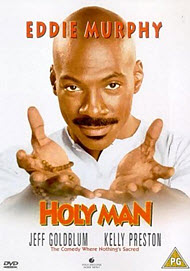 GBSN executive Ricky Hayman (Jeff Goldblum) is in trouble. The Good Buy Shopping Networks sales are not meeting expectations and Ricky is just 7 days away from a pink slip. Enter “G” (Eddie Murphy), a holy man on a journey. G’s natural charisma, spiritual sensitivity, and innocent honesty make him the perfect man to represent the new image GBSN needs to be on top of the home shopping market. However, this “Holy Man” might have more in store of GBSN and Hayman than either of them anticipate or want.

Eddie Murphy, who is the big name attraction to this film, is amusing as G. But the amusement is more from the character of G than any effort of Murphy's. Murphy’s personality and unique comic style are noticeably absent from G. Jeff Goldblum also plays a two dimensonal role. The writers attempt to add some depth to Goldblum’s character with an angst filled tale in the middle of the film, but it’s too late—the mediocrity of “Holy Man” has already destroyed any hope of anything original. Without Murphy’s name attached to this film, it would have never made it to the box office.

“Holy Man” contains some profanity; however, I found this film to be an interesting reflection of the world’s changing value system. G’s character is some amalgamation of new age philosophy and the self help genre. Typical of the world’s view, the film presents leaders of several world religions, each of whom say G is obviously a student of their belief system. Message: all religions are the same at their core. Also present is the world’s growing recognition that the answer is not to be found in the quest of the material; however, “Holy Man” points to some pseudo-psychobabble instead of to The Living God. The attitudes portrayed in “Holy Man” dominate the secular (and to a sad extent some Christians) worldview. Not G, but Jesus should have been the answer.

Due to the lukewarm performance of Murphy and Goldblum, the average script, and flavorless characters along with a moral content which can be found in the new age/self help section of your local bookstore, pass on “Holy Man”. If you or your non-Christian friends see it, you can discuss the emptiness materialism leaves (Ecclesiastes 5:10) and the answer you have in our Lord Jesus Christ.

“Always be prepared to give an answer to everyone who asks you to give the reason for the hope that you have.” (1 Peter 3:15b NIV)

ANSWERS to ISSUES related to this film…

…“Holy Man” simply espouses the New Age Religion, and it wraps that religion in humor, happiness, and help for all your troubles. The New Age religion is portrayed as a panecea for all of your woes. This portrayal of New Age “love and peace” is much more offensive to me than all of the violence and language in “Rush Hour.”

Are Christian movie reviewers becoming too interested in the outside appearance (the language and violence) of movies that they do not dig deeper into what the movie is really saying? “Now you Pharisees clean the outside of the cup and of the platter; but inside of you, you are full of robbery and wickedness.” (Luke 11:39)

Although Jesus spoke of men’s lives in this verse, could we also apply it to the deeper meaning in movies? Do Christians want movies to be “cleansed” of violence and language, but we disregard the wickedness behind this dirt? We need to examine ourselves and why we watch movies. I work in the movie industry and have seen many movies, listened to many people’s reasons for enjoying movies, and made many recommendations. What is interesting is that very few people seek the deeper meaning about what we are being taught when we see these movies.

Debra, age 41
Major deja vu…! This was exactly like “Michael,” with Eddie Murphy’s wise man instead of John Travolta’s, um… angel. And, Eddie Murphy’s only interest in the story was leading Jeff Golblum and Kelly Preston down a path of sinfulness. (Again, just like with William Hurt and Andie MacDowell in “Michael.”) G’s underlying philosophy, the only consistent variable in the whole movie, is “If it makes you happy, do it.” What’s so Christian about that?