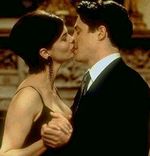 for brief strong language, some violence and sensuality

“Mickey Blue Eyes” is an unlikely Mafia movie. Those familiar with “The Godfather” will understand much of the inside humor. While mobsters are clearly portrayed as the bad guys, we are left unsure as to who the real heroes of “Mickey Blue Eyes” are.

The story is a familiar one. Guy (Michael Felgate—Hugh Grant) meets girl (Gina Mafioso—Jeanne Tripplehorn) and falls in love. Guy finds out the girl-of-his-dreams has a skeleton in her closet. She is the daughter of a well known mobster. Gina introduces her art-critic boyfriend to her dad, who instantly takes a liking to Michael. It isn’t long before Frank Vitale (James Caan) takes Michael under his wing. Through a misunderstanding Michael has to pose as a gangster to save his own skin. He begins to learn the ropes, including how to talk like a mobster. Michael now begins to pass himself off as “Mickey Blue Eyes,” a Mafia hit man.

Hugh Grant’s talents are once again stereotyped as an Englishman breaking his personal mold. There is plenty of sexual innuendo, including homosexual references and several obscene gestures. The language is the standard PG-13 (including some “f” and “s” word obscenities). The name of God and Jesus are taken in vain continually. One scene rebukes an act of blasphemy, but that remark alone does not bring any credibility to the film. “Mickey…” advertises alcohol and tobacco use. Violence is tame in comparison to other films about the mob.

Overall: not worth your time.

I am shocked that this review didn’t mention anything about the biggest problem with this movie which was the VERY blashphemous portrait of Jesus holding a machine gun in his hand and a bloody body insinuating that Jesus shot this person. I heard there was another portrait depicting Jesus but I didn’t see it because I walked out after they showed the first portrait. This movie doesn’t deserve ANY kind of Christian rating because it is one of the most blasphemous movies I’ve ever seen… My Ratings: [1/1]

Sherry, age 31
…spends nearly two hours getting snickers out of Mob activities (extortion, money laundering, murder, arson, intimidation, etc.). …God and Jesus' names are misused close to 50 times. …A vile and bloody painting depicting Jesus firing a machine gun at a person is used as a prop in several scenes. …

Plugged In, Focus on the Family