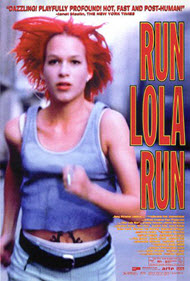 “Run Lola Run” is an extremely rare film. It’s an experimental film, but it’s the most entertaining experimental film I’ve seen. Stylistically, it’s similar to a music video, but it has a lot of substance to back up the style. It’s definitely an art-house type film, but it is probably one of the most crowd-pleasing films I’ve seen in ages. It successfully combines romance, action, suspense, drama, and humor, as well as meaning.

What “Run Lola Run” does is to show how all the little decisions we make throughout the day affect not only us, but everyone around us. And it does this by telling one story several times.

Lola, a red haired punk, is called by her boyfriend Manni, a courier for a diamond smuggler. Manni accidentally lost 100000 DM, and he has 20 minutes to find it, or his boss will kill him. Lola calms him down, telling him that she’ll find the money for him. And she starts running to find the money. However, this 20 minute time span is retold several times, and each time, Lola and the people around her make slightly different decisions which lead to drastically different situations.

The film has stunning camera work, which mixes 35mm film, video, and animation to a pounding techno soundtrack, underscoring the ticking clock as Lola runs. The director uses a stream-of-consciousness style of editing which allow us to see not the character’s thoughts, but what happens to them as a result of the various decisions made. The acting, while it takes a backseat to the style, is nonetheless terrific.

From a Christian perspective, the movie has its ups and downs. There is a fair amount of profanity (subtitled; the movie is in German), some violence, though it is not terribly graphic, and references to an affair Lola’s father is having, although no sex is shown at all. On the upside, the film is a story of someone going all out to save the person she loves. More so, the film, at least for me serves as a powerful reminder to remember that even our smallest actions can dramatically affect other people’s lives.

I saw “Run Lola Run” at the Seattle Film Festival, where it deservedly won Best Picture. I would encourage those without an aversion to subtitles to check the film out. It’s one well worth seeing.

…In your review of this move you do not at all mention the fact that she asks God for help and gets it. That was a very important part of the story. Also as many people think it is not a story just told three different ways. She learns from her mistakes each time subconciously. For instance when she first handles the gun she does not know where the safety is but in her second life that she has been given (to undo the wrongs she has made) she remembers from the past life where the safety is. Also in the last life the guard was expecting her, although he does not know why.

BA
I was lucky enough to see this movie when I was home visiting my parents in Los Angeles last week. This is one of those movies that moves through its running time (81 minutes) at the speed of light where you don’t get time to catch your breath. There’s not much time to really get to know the characters either, but the film is unforgettable. I think most people will really enjoy this movie if only they get a chance to see it. For an “R” rated film, this is fairly mild. (Its very close to a PG-13 in my opinion). The only message that this film carries may not be all that astounding, but it’s something to think about; The choices we make (even the smallest ones) can affect the rest of our lives and those around us. I would definitely recommend this film to all. (And if you happen to be one of those that won’t see movies if they’re subtitled …please get over it, that’s just laziness)

Brian Wanke, age 21
I think that this movie is great but it isn’t necessarily a light entertainment. It also has a lot of philosophical overtones worth noting. First is the concept of free will versus predestination—a hot topic by the standards of any religion. Lola essentially takes the story and attempts to change its fate. She succeeds but others do not. It also has an Eastern Philosophical perspective namely reincarnation—which is a Buddhist and Hindu concept. In fact, much like “Groundhog’s Day” the main character is reborn again and again (in a fictional way) until she gets her fate right. It’s interesting too the way she slows down enough by the end to not only speed up her arrival time to help her boyfriend but also to help bring someone back to life. The film has many lessens about love and perseverance.

Matt Langdon, age 32, non-Christian
The Ball is Round, The Game is 90 minutes-the rest is just theory. This movie was better than anyone could have explained to me. Imagine an 80 minute long nike commerical, without all of the negative connotations that could entail. Engaging, funny characters and a cute, plucky, and likeable heroine. Camera work, editing, music-FANTASTIC. There is a degree of violence in this film, but not nearly so much as to be expected in art-house post Tarantino “hip” films such as this. In addition the fantasy element somewhat dilutes the impact on the deaths in the movie, as it is never revealed for sure which of the three scenarios the movie plays out was the “real deal.”

I am personally totally enamored of the leading lady, though I can’t remember the name for the life of me. I will look for more of her movies in the foreign section of the video store, and hope that her role in “lola” will generate Hollywood interest in her. I am tickled by this site’s regular visitors who will leave a comment on a particular movie that could be summed up as “this is a great movie-no christians should see it.”

That Lola has a sexual relationship with her boyfriend (this is only really dealt with in that scenes take place in bedroom closeups of Lola and Manni) that her father is having an affair, that people don’t arbitrarily make the Christian choice isn’t a deterrent for seeing this movie. Few children would even WANT to see a subtitled picture—how many 9th graders do you know that see foreign films? Thusly, adults with a firm grasp of what their spiritual beliefs are, mainly young people and cinephiles, will be the audience. And there is nothing here for an emotionally if not chronologically mature Christian, Jew, Buddhist, Hindu, Muslim, or Catholic to become embroiled over. Due to CONTEXT.