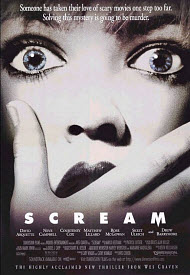 “Someone’s taken their love of scary movies one step too far!”

For all the bad rap horror movies get, the genre makes for tremendously effective morality plays. Think about it. In the mind of a teenager, who’s a more credible authority figure: your parents or Freddy Kreuger? In fact, I’d go so far as to say that many Christians would find horror films particularly noteworthy because kids who violate God’s law are punished.

And that’s precisely what makes “Scream” so entertaining. Here’s a self-reflective movie, like a mirror, that features characters who were raised on a steady diet of bad horror movies. Subsequently, they think they can break the rules and get away with it—and they’re wrong. In the process, director Wes Craven throws a new twist in the genre.

If the antagonist of “Scream” is, well, the slasher, then the protagonist is Sidney Prescott (Neve Campbell). Campbell is quickly becoming a poster girl for new horror films—she was previously in “The Craft”—and it’s doubtful anyone else could play this kind of role with as much credibility.

The opening sequence, featuring a virtually unrecognizable Drew Barrymore, is a blatant nod to the late-1970’s B-movie “When a Stranger Calls”. In addition, one of Sidney’s friends works at a video store. He drops movie references left and right and, because he’s so enamored with horror films, is a prime suspect. Quite simply, it is difficult for any teenager or young adults who grew up watching this sort of stuff NOT to find “Scream” entertaining.

A major liability in the movie is the leech of a tabloid news reporter named Gale Weathers, played by Courtney Cox. Perhaps “Scream” wants to be a satire of the media, but it isn’t. (Whatever happened to actual network news reporters, anyway?) The movie’s effective enough without dragging in marginal characters who get killed off anyway.

Miramax (which is owned by Disney) underhyped “Scream” when it came out late 1996. Then in a marketing fluke, they re-released it to theatres in early 1997. Much of the hype is deserved—very rarely do any horror movies (remembering what horror movies are) treat the audience with any degree of consideration. …I don’t want to see “Friday The 13th Part 29”, I want to see something new and original.

Parents, take note: This is definitely not a movie for kids. At face value, only the last part is unquestionably offensive, but “Scream” did deserve its R-rating for; violence, extreme gore, sex (no nudity), and profanity.

(I feel that) it is suitable for mature audiences who can discern the morality in the story. Bottom line highlighted and stressed: Not for kids.

For a long period of time, I didn’t care for scary movies. That is, until I saw I KNOW WHAT YOU DID LAST SUMMER when it was released in theaters. I’ve been hooked ever since. While I didn’t see SCREAM in the theater, it is my favorite. I’ve since seen many others, even old ones, but they really aren’t anything compared to SCREAM. Though it isn’t scary except for the first 15 minutes, it’s still awesome.

After seeing older scary movies I realized that SCREAM actually began a new trend. Movies that know they’re movies! What a concept! The characters in the movie are all so knowledgeable about scary movies [and all other movies, too!] but at the same time, make the same stupid errors as the people in the movies which they know so well [like when Tatum mistakes the actual killer for Randy while getting drinks].

While it does have bad language [Non-Christian teens, go figure!] it is more than made up for by the excellent plot and smart conclusion. I really enjoy SCREAM each time I watch it and I’m somewhat looking forward to SCREAM3! My Ratings: [2/5]

Jason Eaken, age 16
I was sick to my stomach after watching this film… The youthful killer(s), dressed in a freaky looking costume, choose their victim and then “play a game” with the person. …a form of torture. After the game, the killer(s) literally “slice and dice” and gut the people.

Chris Gearhart
I’m 15, and I thought I would be cool to see this “R” movie. The first 15 minutes scared me so bad I had to get up and run out of the theater. It was so embarrassing. I guess I learned my lesson.

Stephanie, age 15
Three words: SCREAM WAS STUPID! It was just as dumb as those 80’s horror movies it spoofed. I expected more than that. If the killer turned out to be Henry Winkler, who played the principal, then I may have enjoyed it!

Chris Utley, age 24
Neutral
Neutral—Yes, while it is a horror movie filled to the brim with gore and language, it has its moments. These killers aren’t just running around killing for fun, both of them (one for certain) is tortured on the inside. ***SPOILER*** There is an entire scene where they are questioned the “motive” behind their acts of violence… that is when the movie takes almost a sentimental turn where the viewer is left thinking “this could have been prevented if someone just listened to him”. ***END SPOILER***

I believe there is some truth in this movie that could be used in real life. Such as listening to someone if they are showing signs of aggression and/or depression, especially after a traumatic life experience they may have endured.

In conclusion, while this is not a film for kids or anyone who’s offended easily, it (along with Screams 2, 3, and 4) is on the better side of the horror movie genre. Perhaps not morally or directly Christian, but it implies thinking about the emotional tortures the characters go through that could ultimately lead to a Christian attitude.