for thematic elements including tension, some violent images and brief language 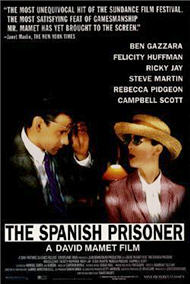 Here’s a quality recommendation for Christian audiences: “The Spanish Prisoner”. This is intelligent, engaging filmmaking with little profanity (about four instances), very little violence, and only minimal innuendo.

“The Spanish Prisoner” stars Campbell Scott as Joseph Scott, a young urban professional who’s about to sell his “Process” (as it’s known) to a nameless corporation. In the Carribean to ink the deal with the stockholders, he meets a shadowy—and shady—figure named Jimmy Dell (Steve Martin, in a serious role), who talks himself into Joe’s business and asks him to deliver a package to his sister once he gets back to New York. Continuous affiliations get Joseph deeper and deeper.

If “The Spanish Prisoner” were made with a Hollywood budget (perish that thought), it would star Michael Douglas. Come to think of it, Michael Douglas already made a derivative of this movie last year—actually, of Alfred Hitchcock’s “Northwest by Northwest”, to be specific about it—in “The Game.” And he’s also in the upcoming “Dial M For Murder” remake, the R-rated “A Perfect Murder”. So, that’s probably the best way to describe this to those who haven’t heard of it. The plot dynamic isn’t much different than those contemporary Hitchcock retreads, though “The Spanish Prisoner” is much more well-written and photographed.

So much of this movie cannot be described without spoiling it; here’s a rare piece of work that unravels like a ball of yarn. Suffice to say, keep an eye on Rebecca Pidgeon’s character who figures big time into this story.

Director David Mamet is one the great American screenwriters, and one can only hope “The Spanish Prisoner” finds the right audience (it’s being distributed by Sony Pictures Classics in limited release, so look for it on video if not in theatres.) Rated PG for tense situations and minor innuendo, this is easily one of the best movies of the year. Highly recommended for discerning Christian audiences.

It’s often difficult for the intelligent, discerning Christian to find movies that are not condescending to either his faith or his cerebellum. Mamet’s “The Spanish Prisoner” is one of those movies. Smart, witty, and spellbinding, it weaves a web of confusion around the viewer that makes him an integral part of the story. One can spend the movie trying to outthink Mamet—to predict what will come next—and succeed only once or twice, at best. And unlike most Mamet screenplays (such as “Wag the Dog”, “House of Games”, and “Glennarry Glen Ross”), it isn’t ridden with profanities, violence or sex. Easily one of the best movies this year for Christians that don’t believe that appropriate moviemaking starts and stops with “Veggietales”.

Matthew Prins, age 21
A very good movie!! It starts slowly and gave me the sense that it was either going to flop completely or develop into something very interesting. The Spanish Prisoner rewards. Though not an action movie, the plot thickens steadily and the characters increase in complexity… what will happen, who to trust? As an aside, Steve Martin does a fine acting job in a serious role. A post viewing critique of The Spanish Prisoner left the group I was with finding the plot riddled with holes. Oh well, while you’re watching it you don’t really care. A well done suspenseful drama without violence, sex or profanity… what a nice break from the typical movie!

Todd Adams, age 30
My husband and I (40, 36) just got back from seeing the movie and we thought it was great. Good plot after a little slow of a start. Really intriguing. Not a huge budget—kind of “Artsy” looking but didn’t leave feeling like “why did we watch that!” Refreshing to watch a good, clean movie.

Libby
This movie was great! It is reminiscent of Hitchcock films (which I love) where you don’t know who to trust and you get nervous for the main character. Even though profanity may have existed in the movie, it was so little that I didn’t notice.

Julie, age 32
My wife and I, (ages 26 and 25) enjoyed this movie thoroughly. The plot was very intriguing. It was a treat to see Steve Martin in a serious role.