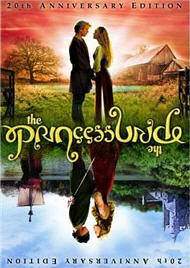 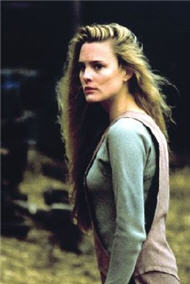 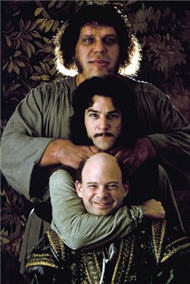 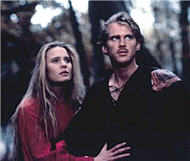 “Scaling the Cliffs of Insanity, battling rodents of unusual size, facing torture in the Pit of Despair. —True love has never been a snap.”

Remember those days as a child when you may have been home from school, lying in bed, sick? Such is the case with a young boy (Savage) who is fortunate enough to have a loving grandfather (Falk) at his side ready to keep him entertained with a captivating story… Only, this story is not exactly a story that most preteen boys desire. Despite the “love story” theme in this tale, grandpa assures his grandson that there is plenty of action and intrigue. And so begins the story.

As the story starts out, it certainly sounds like a love story. A handsome, blond farmboy named Wesley (Cary Elwes) does whatever his beautiful boss, Buttercup (Robin Wright) wishes. He even goes as far as to respond to all her commands with “as you wish”—his signature saying throughout the movie. Although Buttercup mistreats Wesley for the longest time, she finally is smitten with love for him.

Finally some action occurs… Buttercup is kidnapped! She is even led to believe that Wesley was killed. Heartbroken and against her choice, she becomes engaged to the evil Prince Humperdinck (Chris Sarandon) even though she really loves Wesley. She now is becomes known as Princess Buttercup.

“The Princess Bride” is humorous at times. Chivarlious at times. Even downright rude in a few spots. All the ingredients for a hilarious epic! Director Rob Reiner puts unusual twists into what could have been a dry and boring storyline.

From a Christian standpoint, “The Princess Bride” is not overly violent but there will be scenes that may scare younger viewers. There is no nudity and virtually no indecent language. As is the case in most medieval tales, there is a wizard. Miracle Max and his wife (Billy Crystal and Carol Kane) hilariously try to bring someone back to life with magic. This may be difficult to explain to young viewers. However, “The Princess Bride” offers an enjoyable story for preteen through parenting age and proves to be an excellent choice for family entertainment within this age grouping. (Parents will especially be keen on the idea of their kids copying the phrase “As you wish” to every parental request…)

Positive
Positive—Overall, a brilliant story! I have one major problem though. Profanity is treated fairly casually in this movie. “My God” may be commonly used in the real world as a mere exclamation, but I find it more offensive than vulgarity. Also, the sick boy (SAVAGE) uses Jesus as an exclamation guite clearly at one point. That said the language is still far better than most other movies I’ve seen. The action is heroic, the humour is quite clever, and the pace of both is at time breathtaking. My Ratings: [Average / 4½]

Bradley Fleming, age 32
Positive—This is truly one of the most memorable films ever produced. Who could forget Andre the Giant as Fezzik? It is important to note that the Miracle Max is NOT a magician—if anything, he is more like a doctor. He uses an herbal remedy, NOT supernatural powers to revive Wesley. He even makes it crystal-clear (no pun intended) that Wesley is “half-dead” (flatlined) and that if he were “all-dead”, there would be nothing he could do to save his life.

Rolf, age 20, non-Christian
Positive—Rob Reiner encapsulates all the themes from our childhood fairy tales to deliver an enjoyable movie to watch with the entire family… “The Princess Bride” is a very enjoyable movie with no nudity, no sexual situations, and only one instance of a foul word used which occurs at the end of the movie (no use of God’s name in vain)! Although this is an older movie (1987), it is the perfect movie to rent if all the new releases are gone from you local video store. Kids will love the fairy tale like theme and adults will enjoy remembering when a man was a man and fought for his true love. Watch for the special appearence of Billy Crystal.

Jason Hauger, age 24
Positive—“The Princess Bride,” a romance-comedy directed by Rob Reiner, based on the novel by Academy Award winning screenwriter and author William Goldman (who also wrote the script) and starring Robin Wright as the title character is a feel-good chick flick with adventure, romance and comedy. With only one mild profanity (spoken during the climax; though the word in the context is used appropriately), Jesus’ name abused once and a possible double entendre, this movie is perfect for family viewing.

With some of the best lines in cinema history (“As You Wish,” “Hello. My name is Inigo Montoya. You killed my father. Prepare to die,” “Why don’t you give me a nice paper cut and pour lemon juice on it? We’re closed,” “No more rhymes now, I mean it,” “Anybody want a peanut?”) a terrific swordfighting sequence (which was performed for the most part by the actors, with stunt doubles doing only the most dangerous part) and featuring guest appearances by Fred Savage (“The Wonder Years,” “Boy Meets World”), veteran actor Peter Falk (“Columbo”), Mandy Patinkin, Carol Kane and Billy Crystal, this movie is suitable for all ages.

“Fighting, fencing, torture and romance.” This movie has it all. Devoid of sex and graphic violence, “The Princess Bride” is a movie you’ll want to add to your wish list.
My Ratings: Moral rating: Better than Average / Moviemaking quality: 5

Negative
Negative—“The Princess Bride,” 1987, has a scene where the little boy uses the Lord’s name in vain, “Jesus!” he exclaims. In another scene, one of the characters prays to the spirit of his dead father for guidance and strength. What about the part where one of the characters is seen drinking from out of a wine bottle and gets drunk? At the end of the movie, one character sticks his sword into his enemy and calls him a son of a bitch?
My Ratings: Moral rating: Average / Moviemaking quality: 2

Melissa De Soto, age 47 (USA)
Comments from young people
Rolf [says that] that Miracle Max was not a wizard, he was more of a doctor. That is true, but he’s really just a miracle man. Also, Wesley was never “half-dead.” There is no “half-dead.” Wesley was mostly dead. My Ratings: [4½/5]

Ms. Pepper, age 15, non-Christian
Positive—This was the best movie I have seen in a long time. It’s not boring like most clean films, but is still clean. It is romantic with adventure, and one of the best movies I have every seen.