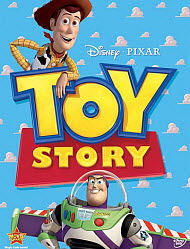 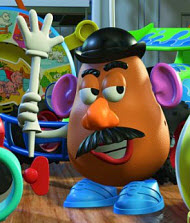 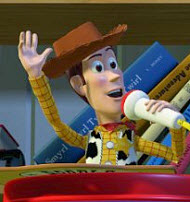 “The adventure takes off!”

This is a great movie about what toys do when there are no humans around.

Though it features many “living” toys, including a sequence where toy soldiers go on a dangerous reconnaissance mission during a birthday party, the story revolves around two particular toys—“Woody” and “Buzz Light-year.” Woody is a good-natured cowboy doll that has been around for a long time and is the most played with toy in the house. Buzz Light-year is a brand new action doll who sincerely believes that he is not a toy but a real Space Ranger.

Woody and Buzz don’t get along too well. Buzz gets played with more (he’s the newest toy) and Woody gets increasingly jealous. However, by a funny chain of events both end up next door in the house of the neighborhood toy mangler, Sid. Lots of toys have gone into Sid’s house, but none have ever come out!

Inside Sid’s dark and sinister-feeling room Woody and Buzz learn that, in order to escape, they will have to work together. Young Sid decides he is going to tape a huge firecracker to Buzz and blow him up. Woody comes up with a plan to save Buzz and in the process makes Sid understand that toys don’t want to be destroyed; they should be played with nicely.

Just when Buzz and Woody think their terrible adventure is over they look back to their boy-owner’s house and see a moving van driving off without them. They run after it and catch a rope that is dangling off the back end, the culmination of a fantastic series of computer animated scenes. (The quality of the computer animation in this film is unbelievable!)

“Toy Story” has no foul language and is an all around good movie. There is one part that may be scary for younger children; when Woody and Buzz are trapped in Sid’s house. Other than that, this is a very good movie! Great for all ages.

I thought this movie was incredible with the animation and all. …I highly recommend this movie that children (my kids are 9 and 13) can watch with fascination for years to come.

Joey Holder
“Toy Story” began as a bright, light-hearted adventure and turned dark with its evil undertones. While the main characters are fun and children could envision their toys coming to life (and what child—grown or not—hasn't?!) the “bad guy” isn’t just bad—he’s downright evil. I was extremely disappointed in the dark side of life that was brought out—it wasn’t enough that a child takes apart his toys and reassembles them (which isn’t bad) but the darkness that colors the film goes beyond the norm into evil. Personally—I wish I’d never seen the movie. It’s a shame that it couldn’t just be fun.