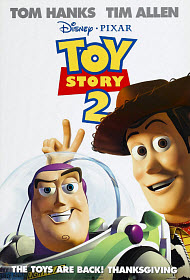 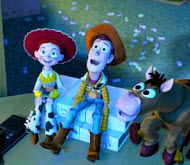 “The toys are back!”

I’ll say it straight out. In my opinion, Pixar is by far the best animation studio in the U.S. (close to the best animation studio in the world, if not for Hayao Miyazaki’s Studio Ghibli in Japan, creators of “Princess Mononoke”). And Pixar’s newest film, “Toy Story 2”, is simply a pure joy to watch. It also stands as one of the few sequels that is better than the original (and “A Bug’s Life”, for that matter). Featuring more stunning animation, a great story, and a much deeper emotional core, it is one of the rare films I would unconditionally recommend to everyone, of any age, with or without kids.

I really don’t want to say anything about the story, except that it is wonderful, and it sees the return of Woody, Buzz, and all the old favorites, as well as many new and memorable characters. Not resting on their previous success, the people at Pixar have pushed their technology much farther, and it shows. Everything looks fantastic, modeled in exquisite detail, with some jaw dropping animation. Not surprisingly, the movie is hilarious. It contains some of the best in-jokes and film references I have seen. More surprisingly, the movie comes off as a really solid drama, with incredible performances; at times I completely forgot that I was watching a bunch of animated toys.

Not only is this a great film from a technological, emotional and artistic perspective, it’s also good from a Christian one. It really is a story about love, faithful friendship, and on a relational level, choosing the things that are important in life. Nothing objectionable, although those with really young kids should of course check for themselves to see if they deem it appropriate (www.screenit.com). Also notably, it doesn’t shy away from the pain and rejection that some of the characters feel, nor does it wallow there.

Earlier this year, I criticized Disney Animation for having lost the magic storytelling it once had. My case in point: “Tarzan”. It felt like two different movies that were patched together, and not very well. They took a great story, and decided that they had to dumb it down for kids, and add lots of humor that really had nothing to do with the story. Pixar’s “Toy Story 2” (which was not made by Disney, but distributed by it), shows how to make a great film with a great story, which is great for kids, but not dumb at all, rather very well written and with a sharp comic edge rarely found in today’s films. I only hope that Disney and anyone else looking to make great family films follows the example that Pixar has provided here.

In short, it’s rare that I find a movie where I find myself laughing half to death, choking back tears, AND walking out of the theater with a huge giddy grin on my face. “Toy Story 2” is one of those movies. Go see it, and drag the kids if necessary.

“GREAT film for EVERYONE!” It really hits hard on the bonds of friendship and love. It also looks at making critical life-changing decisions. Most of all, it teaches us all to enjoy the special times we have and the simple pleasures in life are always the most important. My Ratings: [5/5]

Johnny Ikner, age 28
clean humor… Looks like Pixar has done it again, and they did a lot better than with “Bug’s Life”! “Toy Story 2” is an enjoyable movie for those of us who just want to watch a clean film with clean humor in it. Buzz and Woody were better than ever, and just as wacky! (Like in the part with the toy store and Buzz getting to do everything Woody did in TS1… you have to watch it to know what I mean. :-) The new characters were good. They didn’t feel slapped on—it was like they had always been there. In my opinion, the climax wasn’t as pulse-pounding as in the first movie, but it was pretty good all the same. My siblings, my parents and I all enjoyed ourselves. My Ratings: [5/5]

K. M. Hollar, age 18
“Well done, Pixar”… A great movie! The animation was incredible. Did you see that dog? The story was really good but the best part was its humor. It was hilarious. They have so many little subtle references to the first “Toy Story.” It’s not offensive at all. Well done, Pixar. My Ratings: [5/5]

Mark Arndt, age 16
heartily recommended for ALL ages… This film has accomplished the seemingly impossible task of being truly entertaining to all ages; so much so that I would heartily recommend it even if you don’t have children. My Ratings: [4½/5]

Mark Dawson, age 50
“nothing objectionable”… I went to see this film with almost my entire family on Thanksgiving Day and we all had a great time. The film really only had one dead spot, but the rest of the film was extremely enjoyable. I found nothing objectionable in the movie from a Christian stand point, which is really rare nowadays. It really shows that you can still make a great film without being offensive in some manner. I can’t really think of a better time I’ve had at the movies in a long time. A must see for everybody in the family! My Ratings: [4/5]

Jonathan A. Hall, age 25
I loved it… Who says there’s no such thing as a good G movie? I wish there were more of these comedy type movies out without all the sexual and otherwise demoralizing content. I loved this movie, it was even better than the first. My Ratings: [4/4½]

Kevin, age 28
slightly scary… The first scenes scared my 6 year old, but then realized that it was only part of a video game sequence. We then went on to see it twice on opening weekend! Not better than the first, as I have read in some reviews, but equally appealing. Great fun for kids and adults. P.S. The trailer we saw previewing a summer release dinosaur movie was also scary. My Ratings: [4/5]

Timothy Blaisdell, age 36
I’m 46 years old and have a daughter 24. We saw this wonderfully funny film Thanksgiving weekend and we just loved it. Take your children young and old to see it. You will love it. My Ratings: [5/5]

Peggy James
nothing objectionable… What a fun movie! We took our 4 children (ages 7-13) and each of them enjoyed it tremendously. It has great themes of loyalty and friendship throughout. The animation was fantastic and the script was very funny. My sons and I especially liked the references to the “Star Wars” movies througout. There is not one thing objectionable about this movie, unless you don’t want to see Barbie dolls in bikinis… :o) My Ratings: [5/5]

Michael Glatz, age 42
you’ve got to see it!… This movie is as great as the reviewer says! Anytime a family of four adults can go to a rated “G” movie and have as much fun as a child, is a rare moment indeed! We absolutely loved it, especially the film references! By all means—go see this movie on the big screen. My Ratings: [4½/5]

The James Gang, ages 40, 21, and 19
my caution was laid to rest… Was nervous going into the movie with my 5 year old son, because I didn’t see any previous reviews; and was prepared to walk out if necessary. Was I delighted! For the first time, my son was glued to his seat—and so was I! It was funny, touching (the scene where Jesse sings), and a joy. It was worth the 1 hour wait in line. The acting was superb. My Ratings: [4/5]

T. Davitt, age 34
hysterical… This movie had us all (ages 2-34) sitting on the edge of our chairs, laughing hysterically. We loved it! We are looking forward to seeing it again. Thank goodness someone is making wholesome, intelligent, and funny movies.

Sarah Modisett Lee, age 34
“delightful”… We saw it in a packed theater on Thanksgiving day and found very, very delightful. I couldn’t agree more with the review. My Ratings: [4/5]

Sheila A., age 33
Parents—look no further!… To all Parents wishing for a good movie for everyone: Stop looking. Here it is! The animation in this movie has taken a HUGE leap forward. In the first TS, the toys looked real, but the people were a little less good. This time, you might have to convince youself that at least one of these “humans” are animated! The plotline, story, and moral are very good for all, and we see the friendship between Buzz, Woody, and the rest of Andy’s toybox grow stronger. (Parents might even wish to connect Woody’s saving of Wheezy to Jesus and us… you’d be suprised on how better they can see it) The only thing little kids might want to be told is that their toys do not have feelings. And giving ones toys to Goodwill is a nice thing to do. Otherwise, this is WONDERFUL! I took my sister and cousin to this (both 18) and my two little cousins (about 9). Us older kids laughed more than the younger ones :) My Ratings: [5/5]

Justin, age 22
“The Godfather 2 of Children’s Films”… Or more appropriately, TS 2 is what “The Empire Strikes Back” was to “Star Wars.” Sometimes quite literally :) Joan Cusack and Kelsey Grammar are welcome additions to the cast. I wonder if the wizards at Pixar are thinking of pushing their luck with a third one. I wouldn’t be too surprised, if for nothing else than the ultimate “Star Wars” homage. “To Infinity and Beyond!” My Ratings: [4/5]

Joe Foster, age 20, non-Christian
strong plot, superb animation, good ethics… I took my little cousin to see this film and I think I enjoyed it more than he did! The plot structure is strong, the animation is superb, the action is believeable, and it even had a part that ALMOST brought a tear to my eyes (notice that I said ALMOST). The values and ethics in this movie are right on target. A movie with a point… maybe Hollywood is finally starting to get it! ONE OF THIS YEARS BEST FILMS! My Ratings: [5/5]

Lavell Neal, age 25
maybe better than the original… Man, forget the notion that sequels aren’t as good as the first. This one is just as good as the original, if not better. A truly impressive movie, a great story, with some awesome jokes (tour guide Barbie impersonating the safety announcement on a Disney ride). Awesome!!! And, don’t say it wasn’t made by Disney. Trust me, Mr. Eisner, Roy Disney and Company had their say in this one just as any other. Remember, if they pay for it… they’ll have a say. Pixar and Disney are sort of a partnership. And, the movies are released as a Disney property and they do own the rights. BTW… Anybody see the preview for “Dinosaurs”. All computer animated, but not by Pixar. Yup, the folks in Disney Animation are doing a project of their own and it looks like a winner. My Ratings: [5/5]

Bob Smithouser, Plugged In, Focus on the Family