What is…
Caesara Philippi

Caesara Philippi was a city on the northeast of the marshy plain of el-Huleh, 120 miles north of Jerusalem, and 20 miles north of the Sea of Galilee, at the “upper source” of the Jordan (the Banias River), and near the base of Mount Hermon.

It is mentioned in Matthew 16:13 and Mark 8:27 as the northern limit of our Lord’s public ministry.

“In the midst of pagan self-indulgence, Jesus challenged his disciples to deny themselves and follow him. Christians today must also have the courage to boldly live out Christ’s message in a pagan society.” (from the “Gates of Hell” segment of the video “On the Death & Resurrection of the Messiah”) 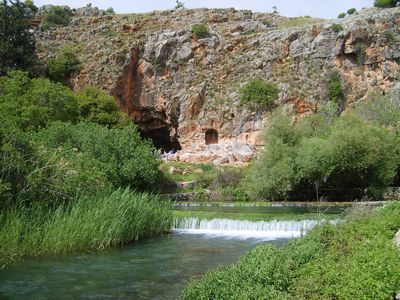 It was afterwards called Panium or Paneas, because of a deep cavern full of water near the town. This name was given to the cavern by the Greeks of the Macedonian kingdom of Antioch because of its likeness to the grottos of Greece, which were always associated with the worship of their god Pan. In Caesara Philippi, the Banias river used to spring from “Pan's Cave” and the pagans surrounded the area with shrines which drew many worshippers. Eventually, an earthquake blocked this exit of the river.

In Caesara Philippi, Herod built a heathen temple, which he dedicated to Augustus Caesar.

This town was afterwards enlarged and embellished by Herod Philip, the tetrarch of Trachonitis, of whose territory it formed a part, and was called by him Caesarea Philippi, partly after his own name, and partly after that of the emperor Tiberius Caesar. It is thus distinguished from the Caesarea of Israel.

Site of Caesarea-Philippi, along with the Banias River which used to emit from the Ein Panias (the spring of Pan) and was known as the source of the Jordan River. This area now includes an Israeli nature preserve.