This is an ancient city on the shore of the Mediterranean Sea, on the great road from Tyre to Egypt, about 70 miles northwest of Jerusalem, at the northern extremity of the plain of Sharon. 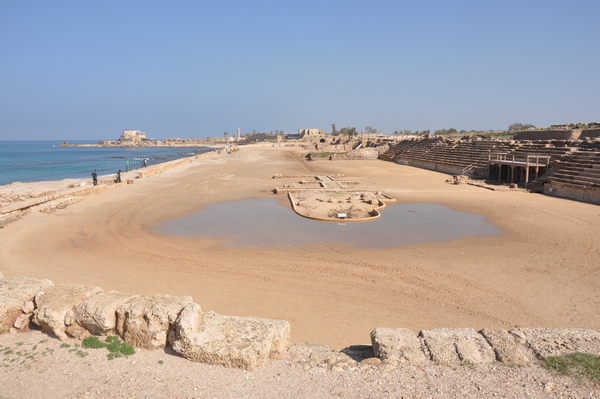 Caesarea was built by Herod the Great (B.C. 10), who named it after Caesar Augustus, hence called Caesarea Sebaste (Greek: Sebastos = “Augustus”), on the site of an old town called “Strato’s Tower.”

King “David built fame out of simplicity; Herod’s palace fortresses were elaborate. But, as with David, who lived for God, what matters most is not what we build, but for whom we build.” (from “Total Commitment” section of video “On the Death & Resurrection of the Messiah”)

It was the capital of the Roman province of Judea, the seat of the governors or procurators, and the headquarters of the Roman troops. It was the great Gentile city of Judea, with a spacious artificial harbor.

It was adorned with many buildings of great splendor, after the manner of the Roman cities of the West.

Here Cornelius the centurion was converted through the instrumentality of Peter (Acts 10:1, 24), and thus for the first time the door of faith was opened to the Gentiles. Philip the evangelist resided here with his four daughters (21:8).

Here on a “set day,” when games were celebrated in the theatre in honor of the emperor Claudius, Herod Agrippa I appeared among the people in great pomp, and in the midst of the idolatrous homage paid to him was suddenly smitten by an angel, and carried out a dying man. He was “eaten of worms” (12:19-23), thus perishing by the same loathsome disease as his grandfather, Herod the Great.

The city later returned to its ancient name Kaiseriyeh, and there was a time when this once great Gentile city of Judea became desolate—once described as the most desolate city of all Israel.

After the creation of the modern State of Israel, archaeologists began uncovering numerous ancient structures here dating to biblical time periods and later. Since 2000, the location has been on UNESCO’s “Tentative List of World Heritage Places.”

The modern city contains the Caesarea Antiquity Museum, a Roman theater, hippodrome, and other ancient sights.

Satellite view of modern Caesarea, Israel. Zoom in and look along the seashore for some obvious ancient ruins (directly west of the Caesarea Golf Club).