Meaning: a rock (referring to the rocky jut-out from the coast on which Tyre was built)

Tyre was an ancient Phoenician port city, about 23 miles, in a direct line, north of Acre, and 20 south of Sidon.

Inhabitants of this city were called Tyrians. The city of Sidon is the oldest Phoenician city, but Tyre had a longer and more illustrious history and was one of the Middle East’s most important cities. Tyre was pivotal in Phoenician colonization throughout the Mediterranean. Its golden age of wealth and influence was in the 900s B.C.

Tyre became a major seaport. The Phoenicians sailed far and wide. The commerce of much of the world was gathered into Tyre’s warehouses. On the shores were villages of murex shell collectors, and the city controlled a fertile coastal area of farms and fields.

Modern Tyre is in Lebanon and is its 4th largest city.

“Tyrian merchants were the first who ventured to navigate the Mediterranean waters; and they founded their colonies on the coasts and neighboring islands of the Aegean Sea, in Greece, on the northern coast of Africa, at Carthage and other places, in Sicily and Corsica, in Spain at Tartessus, and even beyond the pillars of Hercules at Gadeira. (Cadiz)” —Samuel Rolles Driver, Isaiah, his Life and Times

“It is noticed on monuments as early as B.C. 1500, and claiming, according to Herodotus, to have been founded about B.C. 2700. It had two ports still existing, and was of commercial importance in all ages, with colonies at Carthage (about B.C. 850) and all over the Mediterranean. It was often attacked by Egypt and Assyria…”

In the time of David, a friendly alliance was entered into between the Hebrews and the Tyrians, who were long ruled over by their native kings (2 Samuel 5:11; 1 Kings 5:1; 2 Chronicles 2:3). 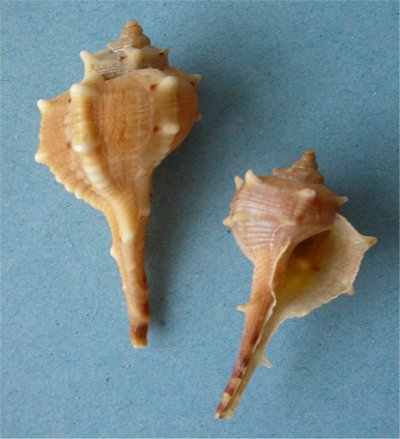 Spiny Murex shells of the type used to make purple dye (Bolinus brandaris). The Tyrians became very skilled, wealthy and famous in their use of these to make expensive garments for royalty. Photo by M. Violante, Haustellum brandaris, Torregaveta, Bacoli, Italy (CC)

Tyre was crowded with glass-shops, dyeing works (particularly Tyrian purple produced from murex shellfish) and weaving establishments. Among their most ingenious craftsmen were those who worked with precious stones (2 Chronicles 2:7, 14).

“The purple dye of Tyre had a worldwide celebrity on account of the durability of its beautiful tints, and its manufacture proved a source of abundant wealth to the inhabitants of that city.”

Tyrian purple was a color reserved for royalty and nobility.

The more ancient Tyre was a fortress built on a strategic rocky peninsula and surrounded with a substantial defensive wall and towers. It was a place of great strength. It was besieged for 5 years by King Shalmaneser, who was assisted by Phoenicians from other cities. Even greater seiges came later.

Wickedness and idolatry of Tyre

After the Tyrians attacked and penetrated the gates of Jerusalem, and pridefully congratulated themselves for their pillaging, destruction and killing of God’s people. This, and their continued wickedness and idolatry, drew the curse of God upon Tyre through the prophet Ezekiel (500s B.C.).

Now in the 11th year, on the 1st of the month, the word of the Lord came to me [the prophet Ezekiel] saying,

“Son of man, because Tyre has said concerning Jerusalem,

‘Aha, the gateway of the peoples is broken; it has opened to me. I shall be filled, now that she is laid waste,’

‘Behold, I am against you, O Tyre, and I will bring up many nations against you, as the sea brings up its waves. They will destroy the walls of Tyre and break down her towers; and I will scrape her debris from her and make her a bare rock. She will be a place for the spreading of nets in the midst of the sea, for I have spoken,’

‘and she will become spoil for the nations. Also her daughters who are on the mainland will be slain by the sword, and they will know that I am the Lord.’”

For thus says the Lord God,

“Behold, I will bring upon Tyre from the north Nebuchadnezzar king of Babylon, king of kings, with horses, chariots, cavalry and a great army. He will slay your daughters on the mainland with the sword; and he will make siege walls against you, cast up a ramp against you and raise up a large shield against you. The blow of his battering rams he will direct against your walls, and with his axes he will break down your towers.

Because of the multitude of his horses, the dust raised by them will cover you; your walls will shake at the noise of cavalry and wagons and chariots when he enters your gates as men enter a city that is breached. With the hoofs of his horses he will trample all your streets.

He will slay your people with the sword; and your strong pillars will come down to the ground. Also they will make a spoil of your riches and a prey of your merchandise, break down your walls and destroy your pleasant houses, and throw your stones and your timbers and your debris into the water.

…I make you a desolate city, like the cities which are not inhabited, when I bring up the deep over you and the great waters cover you…”

King Nebuchadnezzar came against Tyre as prophecied. For 13 years, Tyre’s mighty defenses held back the great seige (B.C. 586-573). And then Tyre was totally destroyed.

Survivors moved to a small, rocky island off the coast. Here they built a wholly new city and named it Tyre. However, the king of Cyprus came with a mighty fleet and conquered them on that island (370s B.C.).

In later years, the ruined island city was rebuilt and the defense strengthened. A new conqueror came, who brilliantly collected forces from many nations and states in a great coalition army (including mercenaries)—Thracians, Macedonians, Greeks, Cretans, Agrianians, Phoenician city-states (Aradus, Byblos, and Sidon), and fleets from Cyprus, Enylos, Lycia, Mallos, Rhodes, and Soli. That new Tyre on the island was also destroyed after a terrible 7 month seige, under the command of Alexander the Great. He displayed his military might and genius by scraping all the rubble and debris from the ruins of the old mainland Tyre—down to the rock. He threw old Tyre into the sea, probably following a natural sand spit. Thus, he built an incredible kilometer-long causeway (mole) through the water, all the way to the island, using it in his plan to defeated the island city defenses (B.C. 332).

Later, both the island and the causeway were swallowed by the sea.

The prophecy was fulfilled; those 2 ancient Tyres were totally destroyed and submerged beneath the sea.

Eventually fishermen built villages on the coast, fishing nets were spread (perhaps even from the ideal position of the old Tyre debris causeway, before it submerged). Shells were harvested.

Commerce continued and a wholly new city coalesced on the mainland, with importance during the Roman and Christian era. Some of the ruins of this new city (including a large arch (see photo) and hippodrome (see satellite view) were excavated in modern times and are visibile to tourists today. 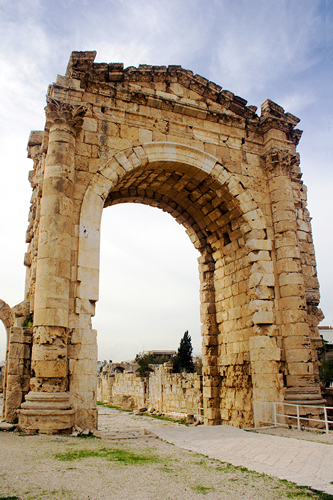 Reconstructed triumphal arch at the new Tyre dating to 2nd century A.D., honoring the Roman Emperor Hadrian—almost 7 stories tall (21 meters). Originally, it was covered with plaster and multiple colors. Photo by David Bjorgen (CC).
Zoom in to see the above arch (center-screen) in this satellite view of the north end of the Roman Hippodrome ruins.

The new Tyre is referred to in the New Testament. Jesus Christ mentioned it in speaking of the hundreds (or thousands) of miracles He did in Galilee to prove his Divinity to the people, to little avail, due to their hard hearts and closed minds. The failed to acknowledge or follow their Messiah.

“Woe to you, Chorazin! Woe to you, Bethsaida! For if the miracles had occurred in Tyre and Sidon which occurred in you, they would have repented long ago in sackcloth and ashes.” —Matthew 11:21 NASB

King Herod Agrippa I was furious with the people of Tyre. Since he controlled their food supply, the Tryrians came to him in Caesarea (just after Peter’s miraculous release from prison and Herod’s immediate execution of the guards).

“…Then he went down from Judea to Caesarea and was spending time there.

Now he was very angry with the people of Tyre and Sidon; and with one accord they came to him…” —Acts 12:18-24 NASB

A church was founded in Tyre soon after the death of Stephen, whose martyrdom was witnessed and encouraged by Saul (Paul). Long after his conversion, Paul visited these Christians on returning from his 3rd missionary journey. He spent a week in discussions with the disciples here (Acts 21:4).

Here the scene at Miletus was repeated on Paul’s leaving the Christians of Tyre. They all, with their wives and children, accompanied him to the seashore. The sea-voyage of the apostle terminated at Ptolemais, about 38 miles from Tyre.

In 1291 A.D., even the newest mainland city was taken (by the Saracens) and totally destroyed, remaining a desolate ruin for many centuries.