The transliterated name (Chorazin) is Aramaic. 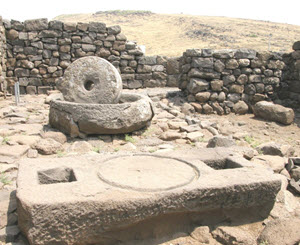 This place is located about 985 feet (300 meters) above the Sea of Galilee on the north side, about 2.8 miles (4.5 km) from the water. The buildings of Korazim are constructed using rough black basalt, local to the area.

It was named along with Bethsaida and Capernaum as one of the cities in which our Lord’s “mighty works” were done, and which was doomed to woe.

Jesus said to his chosen followers,

…whatever city you enter and they do not receive you, go out into its streets and say,

‘Even the dust of your city which clings to our feet we wipe off in protest against you; yet be sure of this, that the kingdom of God has come near.’

Woe to you, Chorazin! Woe to you, Bethsaida! For if the miracles had been performed in Tyre and Sidon which occurred in you, they would have repented long ago, sitting in sackcloth and ashes. —Luke 10:13 NASB and Matthew 11:21 NASB

Chorazin is up the Wady Kerazeh a couple miles from Capernaum; i.e., Tell Hum. Korazim National Archaeological Park is located there today.