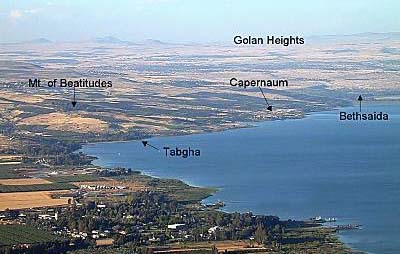 Modern shore of the Sea of Galilee, showing the location of Capernaum. Archaeological evidence indicates the town did not begin until the 2nd century B.C., which explains why it is only mentioned in the New Testament, not the Old. It is located below sea level, and is 10 miles (16 kilometers) from Tiberias. The ruins can be reached by road or boat. (Photo by BiblePlaces.com —a ChristianAnswers associate.)

Capernaum was a large Galilean fishing village and busy trading center. This place is of special interest to Christians because of its frequent mention in the history of Jesus Christ. Peter, Andrew, James and John also lived here. It played a unique and important part in Christ’s life and ministry, and in his outreach to the people of Israel. The inhabitants of Capernaum, including various high ranking citizens, were given unique and abundant opportunities to hear Jesus Christ’s message firsthand and witness His awesome power and love.

2½ miles (4 km) from the Jordan River, Capernaum stood on the northwestern shore of the Sea of Galilee (modern Lake Kinneret, which the Bible also called the lake of Gennesaret, Sea of Chinnereth and the Sea of Tiberias). The ancient city of Capernaum was abandoned about a thousand years ago or more, and was rediscovered by archaeologists beginning in the 1800s. In modern times, it is called Kefar Nahum (Hebrew) and Talhum (Arabic). 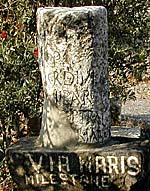 The Gennesaret area was one of the most prosperous and crowded districts of Israel. Capernaum lay on the great Via Maris highway between Damascus (Syria) and Caesarea Maritima on the Mediterranean Sea, and between Tyre and Egypt. Customs taxes were collected from travelers at this crossroads (Matthew 9:9). This was the job of Levi, the tax collector, who became Christ’s disciple and was later named Matthew. Jews criticized Jesus for befriending him and other tax collectors.

Caravans stopped at Capernaum to resupply themselves with produce and dried fish. At the lake shore, where Peter and other fishermen worked, archaeologists discovered a fish sales area.

This well-built structure measured 2 meters in width and 5 meters in length and contained two large, rather shallow, semicircular pools, one at each end, with a rectangular platform in the middle on which, presumably, the fish were cleaned and sold… The two pools had a thick coat of watertight plaster. [Herold Weiss, “Recent Work at Capernaum,” Bible and Spade, Vol. 10, No. 1 (Associates for Biblical Research, 1981), p. 24.] 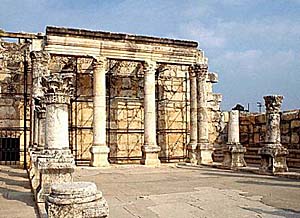 Well-preserved ruins of Capernaum’s white stone synagogue that replaced the one built by the centurion.

The Bible tells us that a Roman centurion built a synagogue here for the Jews (Luke 7:1-5). His servant was later healed from severe palsy by Jesus (Matthew 8:5-13; Luke 7:1-10). The remains of what must have been a beautiful basalt synagogue has been discovered by archaeologists. As expected for such a sacred building, it was found at the highest point in town. 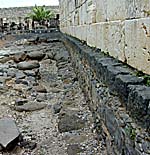 Wall of Capernaum synagogue with earlier basalt level below. These are the remains of the synagogue where Jesus taught.

The synagogue is near the lake, and is built so that when the Jews prayed here, they faced Jerusalem. It was destroyed along with Jerusalem’s temple, around 70 A.D. Many years later, it was replaced with a white stone synagogue (perhaps 250-300 A.D.) (shown above). 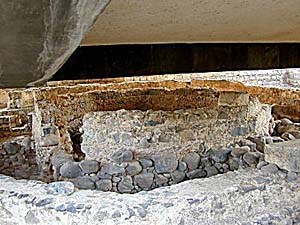 Excavations revealed one residence that stood out from the others. This house was the object of early Christian attention with 2nd century graffiti and a 4th century house church built above it. In the 5th century a large octagonal Byzantine church was erected above this, complete with a baptistery. Pilgrims referred to this as the house of the apostle Peter. (Caption and photos by BiblePlaces.com —a ChristianAnswers associate.)

Only a few hundred feet from the synagogue, the stone house of the disciple Peter has also been found at Capernaum. This is where Jesus healed Peter’s mother-in-law and others (Matthew 8:14-16). Jesus may have lived with Peter while staying in Capernaum. In the years following Jesus' death and resurrection, the house apparently became a house-church. Centuries later, Christians honored the site by building a church here. It was destroyed in a later conquest of the city. Archaeologists have excavated both the church and the earlier house below. Stanislao Loffreda reported,

Archaeological reconstruction of Peter’s house as it may have appeared at Jesus' time.

Literary sources and recent archaeological discoveries make the identification of the house of St. Peter in Capernaum virtually certain.

The house was built at the very end of the Hellenistic period (first century B.C.). In the second half of the first century A.D. some peculiar features set apart this building from all the others so far excavated in Capernaum. Here, in fact, the pavements received floors of lime several times. Interesting enough, many pieces of broken lamps were found in the thin layers of lime. …One hundred and thirty-one inscriptions were found. They were written in four languages, namley: in Greek (110), Aramaic (10), Estrangelo (9), and Latin (2).

The name of Jesus appears several times. He is called Christ, the Lord, and the Most High God. An inscription in Estrangelo mentions the Eucharist.

There are also symbols and monograms, namely: crosses of different forms, a boat, the monogram of Jesus. The name of St. Peter occurs at least twice: his monogram is written in Latin but with Greek letters. In another graffito St. Peter is called the helper of Rome. A third inscription mentions Peter and Berenike. This Peter, however, might be the name of a pilgrim. On several hundred pieces of plaster, decorative motifs appear. The colors employed are: green, blue, yellow, red, brown, white and black. Among the subjects one can distinguish floral crosses, pomegranates, figs, trifolium, stylized flowers and geometric designs such as circles, squares, etc.

…At the beginning of the fifth century, the house of St. Peter was still standing, but it had been previously changed into a church. This we learn from Eteria, a Spanish pilgrim, who wrote in her diary: “In Capernaum, the house of the Prince of the Apostles (=St. Peter) became a church. The walls, however, (of that house) have remained unchanged to the present day.”
[Stanislao Loffreda, “Caperaum—Jesus' Own City,” Bible and Spade, Vol. 10, No. 1 (Associates for Biblical Research, 1981), pp. 12, 7-8.]

Mary, the mother of Jesus, made her way to Capernaum with her other sons (Matthew 12:46, 48-49). It was here that Christ uttered the memorable words, “Who is my mother? and who are my brethren? And he stretched forth his hand toward his disciples, and said, Behold my mother and my brethren!”

Miracles of Christ in Capernaum 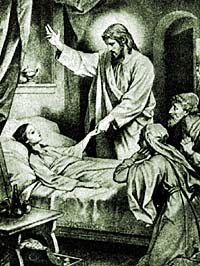 Jesus restored the life of the Capernaum synagogue ruler’s daughter.

Despite the unique number of evidences our Lord presented to them, most of the people of Capernaum lacked faith in Him and remained unrepentant disbelievers. Because they turned so strongly away from the uniquely gracious light given, they were strongly judged.

Thus, along with nearby Chorazin and Bethsaida, Capernaum received a very stern warning from Jesus (Matthew 11:21-24).

“It shall be more tolerable for the land of Sodom in the day of judgment, than for thee.”

Ultimately, the cities were all destroyed, and Capernaum became virtually uninhabited ruins for centuries.

Today, Capernaum’s inhabitants include a Greek Orthodox Church and a Franciscan Monastery.

Some photographs for this article supplied by ChristianAnswers associate, BiblePlaces.com

Associates for Biblical Research (Bible archaeologist Team Members of ChristianAnswers.Net)—along with others, they are involved researching Capernaum