What does archaeology tell us about Paul’s travels through Cyprus (Acts 13:4-12)?

Paul and Barnabas arrived at Salamis on Cyprus by sea and preceded “through the whole island as far as Paphos” (Acts 13:6). On other parts of their travels it seems likely that they took advantage of the network of roads constructed under the authority of Rome. Thus after leaving Cyprus on their way to Psidian Antioch, Paul used the via Sebaste constructed in 6 BC by Augustus.[1] In Macedonia the via Egnatia served as the route from Neapolis westwards.[2] 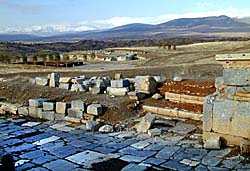 View of some of the ruins of Pisidian Antioch where Paul and Barnabas were headed. Photo provided by ChristianAnswers Associate, BiblePlaces.

The Cyprus journey would have taken the pair of them from the east coast of Cyprus to the west. This claim may reflect the way that the route used passed through some of the most important cities of the island. However, it is first important to understand the development of the province.

The province was acquired in 58 BC (Badian 1965), although Cyprus had earlier been considered as one of the “friends and allies of Rome.”[3] Initially it formed an annex to the Roman province of Cilicia,[4] and in 48/7 BC the island was returned to the control of Egypt. The death of Cleopatra in 31 BC brought Cyprus back under Roman control. Subsequently, in 22 BC, Augustus made Cyprus one of the senatorial provinces under a proconsul of praetorian status. There were no Roman colonies established on the island. 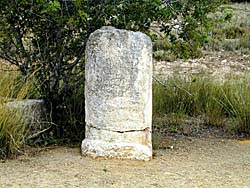 The roads of Roman Cyprus

The evidence for a road between Salamis and Paphos is twofold: firstly in the form of the Roman itineraries, and secondly in the form of milestones. The “Peutinger Table” which lists the routes and mileages would suggest two possible routes from Salamis (Miller 1916: 827-29). The first cut to the north-west to Chytri, over the Kyrenia Ridge to the north coast. It then followed the coast to Soli, Arsinoe (Marion), and then south to Paphos. The second headed for Citium on the south coast, then westwards to Amathus, Curium and then Paphos. These routes are not contemporary, and are likely to have developed over a period of time. The distances can be tabulated as follows:

This gives a total of 115 miles.[5] The alternate route via the north coast would have been much longer. 88 miles from Salamis to Soli (or 71 miles via Tremithus), and then another 54 miles to Paphos via Arsinoe, giving a total of 142 miles.[6] The distances between cities would also be convenient for a day’s travel, making this at least a six day journey from one end of the island to the other.[7]

The best way of dating these roads is by the surviving milestones which often bear the names of the emperor (Mitford 1980: 1333-35, n. 213). Most of these belong to the fourth century AD, and are likely to represent a period of repair to the road system rather than its expansion. Paul’s and Barnabas’ journey, at least along the south coast, would have been facilitated by the construction of a Roman road during Augustus’ reign. This is attested by a milestone, located 11 (Roman) miles from Paphos towards Curium (Mitford 1966:98-99 no. 3).[8] It reads:

As Augustus is named as pontifex maximus the work must have taken place after 12 BC.[9] Although the inscription only allows certainty about the construction of the road between Paphos and Curium, it is possible that it was extended eastwards as far as Salamis. The next significant development was the construction of “new roads” ([via]s novas; Corpus inscriptionum latinarum III.6732)10] throughout the province[11] between July and September 81 during the reign of Titus.[12] A milestone identified a new road heading north-east from Salamis to Agios Theodoros and thence presumably to Carpasia.[13] The other roads which were constructed in the Flavian period were presumably an extension to the Augustan scheme. Mitford proposed that the route across the heart of Cyprus from Soli to Salamis was one of these constructions (1980: 1336).

The next main series of inscriptions comes from the Severan period.[14] As some of these were found along the road heading from Paphos to Curium it is clear that this was in part repair work. However, it is from this period that there is the first clear indication of a road from Soli to Arsinoe and then south to Paphos.[15] Given this evidence the simplest solution to the proposed route of Paul and Barnabas was from Salamis along the south coast. 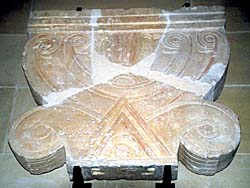 Cities visited by Paul and Barnabas

The only cities on Cyprus mentioned in the Book of Acts are Salamis and Paphos. However, if Paul and Barnabas travelled on foot along the Augustan road along the south coast,[16] they would have passed through Citium, Amathus and Curium before reaching Paphos.[17]

Three of the cities had been granted the status of asylum in AD 22 due to the standing of their civic sanctuaries.[18] These were Salamis (Olympian Zeus; Mitford 1990: 2189-90), Amathus (Aphrodite; Mitford 1990: 2185), and Paphos (Paphian Aphrodite). It should be noted that although these deities may sound like anthropomorphic Olympian gods, in fact, some had a more regional feel. Paphian Aphrodite was in fact represented by a sacred rock or baetyl, rather than the cult statue of a goddess.[19]

A similar cult of sacred rocks is recorded near Amathus. An inscription found at Agios Tychon near Amathus records a cult of “Cyprian Aphrodite” and the sanctuary of “the Seven within the Stelai” (Mitford 1980: 1302, no. 28; 1946: 40-42, no. 16).[20] The dedication was made by the Roman governor of Cyprus, L. Bruttius Maximus (79/80). This was presumably a sanctuary with a central baetyl with other sacred rocks around it. The worship of sacred rocks is not uncommon in the east. In particular, the famous baetyl of Emaesa was to be taken to Rome by Elagabalus[21] or the cult of Artemis at Perge (Butcher 1988: 90, fig. 6.114). 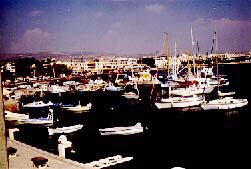 Both Salamis and Paphos were the two most important cities on the island. Paphos was the seat of the provincial administration (Mitford 1980: 1309-15), and it was here that Paul met the governor of the island, Sergius Paulus.[22] It had been founded around 312 BC, to replace Palaipaphos. During the second century BC it seems to have become the leading city of the island, taking the prominence away from Salamis.[23]

The city had been wrecked by an earthquake in 15 BC and Augustus had subsequently conferred on the city the title Augusta (Mitford 1980: 1310, with details of the proper title). Further honors were given to the city, perhaps under Nero, when it received the extra title of Claudia (Mitford 1980: 1310).[24]

Paphos’ centrality in the Roman scheme of affairs is also emphasized by the milestones that mark distances from it. Of the other cities Citium managed to retain elements of its earlier Phoenician past (Mitford 1980: 1318-20). The earlier Phoenician cult of Eshmun became that of Asclepius which was active under Augustus (Mitford 1980:1319). One of the first century BC or Augustan high-priests and benefactors of the cult carried a name, Asclepiodorus son of Asclepiodorus, which reveals his links with Asclepius.[25]

Elsewhere in the city a stoa was dedicated in 41 BC to Zeus Keraunios, to the Divine Julius and to Aphrodite (Corpus Inscriptionum Graecarum 2641; Mitford 1990: 2195). Amathus also had an important cult site of Hera, which was certainly active in the Claudian period (Inscriptiones Graecae ad Res Romanas Pertinentes III.974).[26]

An altar dedicated to Augustus was found on the acropolis (Inscriptiones Graecae ad Res Romanas Pertinentes III.973). The sanctuary of Apollo Hylates, which lay just to the west of the city, may have been developed at the same time.

In conclusion, the route followed by Paul and Barnabas through Cyprus would have brought them to several of the key cities of the island, including the three which had been granted the special status of asylum. The itinerary suggests that this would have taken at least a week. The road would have brought them into contact with some of the main cult centers such as the sanctuary of Aphrodite at Palaipapos. It also led them to the heart of the Roman administration of the island at Paphos.

Copyright © 1995, David W.J. Gill, All Rights Reserved—except as noted on attached “Usage and Copyright” page that grants ChristianAnswers.Net users generous rights for putting this page to work in their homes, personal witnessing, churches and schools.