In the Bible, what is a…
harp 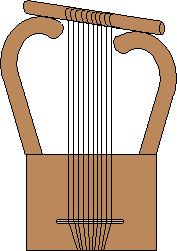 Artist’s impression of a Hebrew kinnor (harp) in Old Testament times. Illustration by Aaron Walden, based on ancient artifacts and artistic representations (CC).

This word appears 42 times in Scripture. The harp was the national musical instrument of the Hebrews. It appears to be the type of harp we call a lyre, although a minority think the word kinnor refers to the whole class of biblical stringed instruments.

The harp was invented in the pre-Flood world, not long after Earth’s creation, by a man named Jubal.

Apparently Noah’s family carried the harp to the post-Flood world, as it appears in very early times.

Great voice in prophecy with a harp-like sound

The Apostle John reports that in his vision of the Church in Heaven celebrating the triumphs of the Redeemer, he heard a voice…

KJV: “…harping with their harps.”