Was Jesus Christ only a legend? 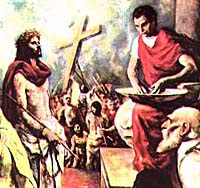 This answer based, in part, on an actual exchange with a skeptic.

I asked, who is Jesus of Nazareth to you? Are you suggesting that He was deliberately lying as regards His claims to be God (i.e. John 5:18)? Or are you saying that He was self-deluded, a wacko, who had somehow only come to think of Himself as God?

Skeptic: Neither. I think that the Jesus we see portrayed today is probably the composite of more than one person. I think the story of his life was no doubt embellished to some degree, just the same as may be true for King Arthur or Robin Hood.

Response: So you're not suggesting that Jesus was a liar. And you're not saying that He was a lunatic. You're really of the opinion that He is, as we know Him today, just a legend?

Skeptic: Essentially, yes. I tend to believe that the supernatural aspects of Jesus' life are fictional. That's the scenario that seems most plausible to me.

Response: Well, I would say that a number of problems come to mind with regard to the idea that Jesus as we know Him today is just a legend.

Let me set them out as follows: