The following article is addressed primarily to those of our friends who are affiliated with one of the following three faith systems: 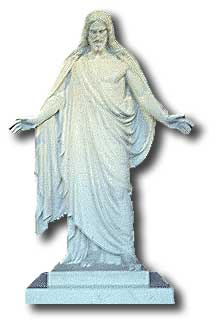 Numerous times in my various conversations with those of you who claim that Joseph Smith, Jr., was indeed a true prophet of God, conveying an authentic message from God, I have heard you rather adeptly respond to some of the more common charges against Mormonism, such as the one that the Book of Mormon and the Doctrines & Covenants add to the canon of Holy Scripture, thus violating Revelation 22:18.

But over and over again I have heard you sidestep, equivocate, hedge, dodge, and generally try to circumvent in just about every way possible the inspired words of the Apostle Paul in Galatians 1:6-9.

One Mormon elder, in a written response commenting on the Galatians text, actually said, “…please don’t beat me over the head with it.”

Now that sounds to me more than a little bit defensive, and it even further confirms for me the fact that Galatians 1:6-9 is Mormonism's most convicting Bible text. In that passage the Apostle Paul says,

“I am amazed that you are so quickly deserting Him who called you by the grace of Christ, for a different gospel; which is really not another; only there are some who are disturbing you, and want to distort the gospel of Christ. But even though we, or an angel from heaven, should preach to you a gospel contrary to that which we have preached to you, let him be accursed. As we have said before, so I say again now, if any man is preaching to you a gospel contrary to that which you received, let him be accursed.”

The only even partially credible attempt I've ever heard Mormons advance in response to this text is to suggest that it was the early church who believed the false gospel, with Joseph Smith therefore being ordained by God to restore it. But if the Church was already hopelessly apostate when Paul wrote these words, what was the point of his writing them? And why, in such an event, would God have waited over 1,766 years (from 57 A.D. to 1823 A.D.) to restore His Church?

Even if this text was only, primarily, intended to be applied locally, to the church in Galatia, the principle stands—the true Gospel is a message of salvation by grace, not of works—which flies in the face of other Mormon teaching (Book of Mormon, 3 Nephi 12:44-45).

Aside from all that, the plain sense of this text itself could not be any clearer. Paul includes even himself among those who are to be accursed if he should ever subsequently try to revise or append the Gospel in any way. And he says, "…or an angel from heaven…" If the term angel (aggelos—messenger) doesn't include Moroni, whose image rises atop the Mormon Temple in Salt Lake City, Utah, to this day, then who would it ever include?

Would you consider the possibility that either Moroni, or Moroni's father, Mormon, the Nephite historian and alleged author of the gold plates from which the Book of Mormon was later to be translated, were false spirits, or at least had it wrong due to the leading of a false spirit—and that Joseph Smith was therefore at the very least the victim of a deceiving spirit (I Timothy 4:1) disguised as an angel of light (II Corinthians 11:14)?

If this text begins to convict you regarding the very tenuous ground on which Mormonism stands, please—don't quell the conviction. Welcome it as God's voice of direction for you to discern the spirit of truth from the spirit of error. And then move to act on that conviction and discernment.

If you are a follower of Jesus Christ who is interested in sharing your faith with friends who are LDS, etc., please visit our page about the Church of Jesus Christ of Latter-day Saints in our Effective Evangelism section. Included are further articles, information about the history of the LDS faith, stories from those who have come out of the LDS church or who work with Mormons, recommended resources, and more.