Is it possible that Jesus did not die, but only fainted on the cross, later recovering from His wounds? 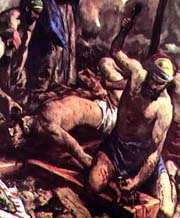 Artist's conception - Jesus being nailed to the cross by soliders.

Crucifixion was an ex-cruciating experience—indeed, these 2 words are clearly related. The cause of death by crucifixion was multifaceted and torturous! These factors included exhaustion asphyxia, dehydration, and congestive heart failure.[1]

That Jesus could have survived such agony on a Roman cross, to limp out of the tomb by His own power, is improbable enough! That His bruised and grievously wounded appearance could have been hidden, so that He could deceive despairing disciples into believing He was “The Risen Lord of Life” and conqueror of death, is absurd! A man in such a condition could hardly have inspired his disciples. Jesus would have been incriminated as a fraud. Only a supernaturally raised Jesus was capable of healing the broken hearts of the disciples.

The Roman soldiers pronounced Jesus dead, and He was dead. The mixture of blood and water that poured out of the wound they made in his side is clear evidence of this.

If the writers of the Gospels had been inclined to exaggerate, they would have been restrained from doing that by the fact that a great many people were still living who had witnessed the events about which they were writing. Many were ardent foes. If the disciples had put in errors or exaggerations, they would have been challenged by people in a position to know. 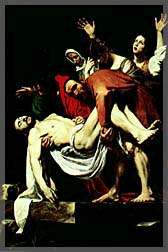 Some today might naively assume that the First Century was an age of extreme childish credulity—that people in those days were willing to attribute supernaturalism to almost any unusual occurrence. But this is an unfair way to describe that time.

Jerusalem was a crossroads of the world. Educated men had been reading Aristotle for over three centuries. Epicureanism was the prevailing philosophy of the day (eat, drink and be merry, for tomorrow we die). Many in the Greek and Roman world barely recognized the existence of a real God and held in utter contempt the idea of God intervening in the affairs of men.

The Jews also were skeptical and reasoned people, and had absorbed Roman philosophical ideas. (They were part of the Roman world with Roman laws and Roman courts.)