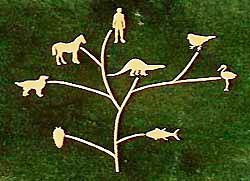 Evolution versus a basic law of nature

Scores of distinguished scientists have carefully examined the most basic laws of nature to see if Evolution is physically possible—given enough time and opportunity. The conclusion of many is that Evolution is simply not feasible. One major problem is the 2nd Law of Thermodynamics.

law of science: basic, unchanging principle of nature; a scientifically observed phenomenon which has been subjected to very extensive measurements and experimentation and has repeatedly proved to be invariable throughout the known universe (e.g., the law of gravity, the laws of motion).

thermodynamics: the study of heat power; a branch of physics which studies the efficiency of energy transfer and exchange.1 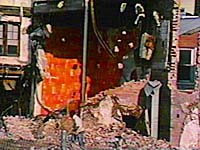 Decaying buildings. Massive structures may appear to be capable of lasting almost forever, but they will not. The need for ongoing repairs stems, in part, from the 2nd Law of Thermodynamics. (Scene from the ORIGINS motion picture series.)

The 2nd Law of Thermodynamics describes basic principles familiar in everyday life. It is partially a universal law of decay; the ultimate cause of why everything ultimately falls apart and disintegrates over time. Material things are not eternal. Everything appears to change eventually, and chaos increases. Nothing stays as fresh as the day one buys it; clothing becomes faded, threadbare, and ultimately returns to dust.2 Everything ages and wears out. Even death is a manifestation of this law. The effects of the 2nd Law are all around, touching everything in the universe.

Each year, vast sums are spent to counteract the relentless effects of this law (maintenance, painting, medical bills, etc.). Ultimately, everything in nature is obedient to its unchanging laws.

2nd law of thermodynamics: Physicist Lord Kelvin stated it technically as follows: "There is no natural process the only result of which is to cool a heat reservoir and do external work." In more understandable terms, this law observes the fact that the useable energy in the universe is becoming less and less. Ultimately there would be no available energy left. Stemming from this fact we find that the most probable state for any natural system is one of disorder. All natural systems degenerate when left to themselves.3 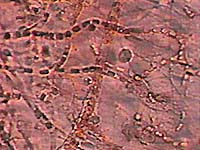 Cells and blood vessels—scene from the ORIGINS motion picture series.

It is well known that, left to themselves, chemical compounds ultimately break apart into simpler materials; they do not ultimately become more complex. Outside forces can increase order for a time (through the expenditure of relatively large amounts of energy, and through the input of design). However, such reversal cannot last forever. Once the force is released, processes return to their natural direction - greater disorder. Their energy is transformed into lower levels of availability for further work. The natural tendency of complex, ordered arrangements and systems is to become simpler and more disorderly with time.4

Evolutionism claims that over billions of years everything is basically developing UPWARD, becoming more orderly and complex. However, this basic law of science (2nd Law of Thermodynamics) says the opposite. The pressure is DOWNWARD, toward simplification and disorder. (Illustration from the ORIGINS series)

Thus, in the long term, there is an overall downward trend throughout the universe. Ultimately, when all the energy of the cosmos has been degraded, all molecules will move randomly, and the entire universe will be cold and without order. To put it simply: In the real world, the long-term overall flow is downhill, not uphill. All experimental and physical observation appears to confirm that the Law is indeed universal, affecting all natural processes in the long run.5

Naturalistic Evolutionism requires that physical laws and atoms organize themselves into increasingly complex and beneficial, ordered arrangements.6 Thus, over eons of time, billions of things are supposed to have developed upward, becoming more orderly and complex.7

However, this basic law of science (2nd Law of Thermodynamics) reveals the exact opposite. In the long run, complex, ordered arrangements actually tend to become simpler and more disorderly with time. There is an irreversible downward trend ultimately at work throughout the universe. Evolution, with its ever increasing order and complexity, appears impossible in the natural world.

Has the 2nd Law Been Circumvented? No, says expert Frank A. Greco:

"An answer can readily be given to the question, 'Has the second law of thermodynamics been circumvented?' NOT YET." 8

"Of all the statements that have been made with respect to theories on the origin of life, the statement that the Second Law of Thermodynamics poses no problem for an evolutionary origin of life is the most absurd… The operation of natural processes on which the Second Law of Thermodynamics is based is alone sufficient, therefore, to preclude the spontaneous evolutionary origin of the immense biological order required for the origin of life." (Duane Gish, Ph.D. in biochemistry from University of California at Berkeley) 10

"It is probably no exaggeration to claim that the laws of thermodynamics represent some of the best science we have today. While the utterances in some fields (such as astronomy) seem to change almost daily, the science of thermodynamics has been noteworthy for its stability. In many decades of careful observations, not a single departure from any of these laws has ever been noted." 11

If Evolution is true, there must be an extremely powerful force or mechanism at work in the cosmos that can steadily defeat the powerful, ultimate tendency toward “disarrangedness” brought by the 2nd Law. If such an important force or mechanism is in existence, it would seem it should be quite obvious to all scientists. Yet, the fact is, no such force of nature has been found.

A number of scientists believe the 2nd Law, when truly understood, is enough to refute the theory of Evolution. In fact, it is one of the most important reasons why various Evolutionists have dropped their theory in favor of Creationism.

Is Energy the Key?

To create any kind of upward, complex organization in a closed system requires outside energy and outside information. Evolutionists maintain that the 2nd Law of Thermodynamics does not prevent Evolution on Earth, since this planet receives outside energy from the Sun. Thus, they suggest that the Sun's energy helped create the life of our beautiful planet. However, is the simple addition of energy all that is needed to accomplish this great feat?12

Compare a living plant with a dead one. Can the simple addition of energy make a completely dead plant live?

A dead plant contains the same basic structures as a living plant. It once used the Sun's energy to temporarily increase its order and grow and produce stems, leaves, roots, and flowers - all beginning from a single seed.

If there is actually a powerful Evolutionary force at work in the universe, and if the open system of Earth makes all the difference, why does the Sun's energy not make a truly dead plant become alive again (assuming a sufficient supply of water, light, and the like)?

What actually happens when a dead plant receives energy from the Sun? The internal organization in the plant decreases; it tends to decay and break apart into its simplest components. The heat of the Sun only speeds the disorganization process. 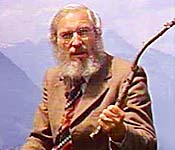 The distinguished scientist and origins expert, Dr. A.E. Wilder-Smith, puts it this way:

"What is the difference then between a stick, which is dead, and an orchid which is alive? The difference is that the orchid has teleonomy in it. It is a machine which is capturing energy to increase order. Where you have life, you have teleonomy, and then the Sun's energy can be taken and make the thing grow - increasing its order" [temporarily].13

Where did the teleonomy of living things originate? It is important to note that the teleonomy (the ordering principle, the know-how) does not reside in matter itself. Matter, itself, is not creative. Dr. Wilder-Smith:

"The pure chemistry of a cell is not enough to explain the working of a cell, although the workings are chemical. The chemical workings of a cell are controlled by information which does not reside in the atoms and molecules."15

Creationists believe cells build themselves from carefully designed and coded information which has been passed from one life to the next since their original inception.

[Learn more about the origin of life]

The 2nd Law of Thermodynamics is just as valid for open systems as it is for closed systems, says John Ross, Harvard University:

including rebuttal arguments against claims that this law is wrongly applied against Evolution or that it is contradicted by growth, living systems, crystal formation, etc.

Copyright © 1998, 1999, Films for Christ, All Rights Reserved—except as noted on attached “Usage and Copyright” page that grants ChristianAnswers.Net users generous rights for putting this page to work in their homes, personal witnessing, churches and schools.