How are star distances measured?

Since radar and space probes cannot reach the stars, other methods are needed for finding stellar distances. Nearby stars are measured with parallax, which involves two measurements of the star's exact position in the sky. The readings are taken on opposite sides of the Earth's orbit, six months apart. From this triangulation (or surveying) method, the star distance is determined.

In this illustration the parallax angle is exaggerated. It is always smaller than one second of arc, less than 0.0003 degrees. The parallax technique works for stars out to a distance of several thousand light-years. (ly). The satellite Hipparchus, launched in 1997, has been used for many of these measurements. Many thousands of stars fall within parallax range, including Arcturus (37 ly), Sirius (8.6 ly), and Spica (220 ly).

For the longer star distances, indirect methods are used. The Cepheid variable technique is useful out to millions of light-years. Cepheids are a category of stars whose actual brightness is well known. If a Cepheid appears dim its distance thus can be estimated. The method is similar to judging the distance to an oncoming car by observing its headlight in the distance. Cepheids are very bright stars, so they can be identified in faraway galaxies. The Cepheid method gives the distance to the Magellanic Clouds (180,000 ly) and also to the Andromeda Galaxy (2.9 million ly). 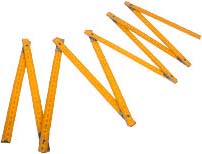 The final yardstick for stellar distances that will be mentioned here is the redshift of starlight (see Is the universe expanding?). The shift results from the overall expansion of the universe. A star's light is altered as the star is carried outward by the expansion of space. The effect is somewhat similar to water waves stretched out behind a speedboat. The term redshift arises because red is the color of visible light with the largest wavelength. Entire galaxies appear to be receding from the Earth, as measured by their redshift. The faster they are traveling, the farther away they seem to be. There is considerable guesswork in determining actual distance from the redshift, and there are also other possible explanations besides motion. If it is correct, this method gives distances for galaxies out to 15 billion light-years or more. Astronomers also use several other distance techniques for stars. Although the parallax distances are accurate to within about 10 percent, all other methods are more uncertain. Actual star distances could be somewhat smaller or larger than current estimates.