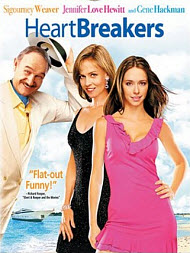 “Heartbreakers” is a film that attempts to pay homage to the many con films of yesteryear, but unfortunately has to do so with a plot laced with immoral behavior that largely drowns out the somewhat off-base moral message its ending tries to convey. Some of its “heart” is in the right place, but it misses the mark overall.

The film tells of Paige (Hewitt) and her mother (Weaver), one of the slickest (or only) mother-daughter con teams in America. The two travel the country with the same scam—mother romances and quickly marries a well-to-do man, while daughter (in disguise) then quickly seduces said man into comitting adultery. Mother then catches her new husband in the act of cheating and collects a fat divorce settlement. Busted by the IRS for tax fraud, Paige and Mom have to pull off one final con to pay them off, while Paige wants to start conning on her own—Mom is not thrilled by this idea, convinced Paige will fall for some “hunk” and end up a single mother just like she was years earlier. Paige and Mom try the con on unsuspecting tobacco magnate Gene Hackman, but complications and “laughs” ensue when

Mom’s last ex (Liotta) shows up begging to be taken back. Also complicating matters, Paige falls for a local bar owner she is trying to con on the side. In the end, everyone winds up (supposedly) happy and everything works out for the best (maybe). “Heartbreakers” was obviously meant to be a laugh-filled comedy of errors with a clever plot that keeps you guessing, and it succeeds to a point. The story kept me interested with lots of twists and turns, though it’s hard to root for any of the characters, since they are all immersed in immoral lifestyles.

In addition, “Heartbreakers” is filled with sin up to its gills—lying, cheating, and stealing abound, not to mention Weaver and Hewitt spend just about every scene in scantily clad outfits. If seeing women’s cleavage offends you, stay away—it’s in every scene. There is a message about letting your children go and the film does paint the con’s life in a somewhat negative light, but real conning is nothing to laugh at.

This movie can be summed up in one word: disgusting! It is full of way too many horrendous things—way too many to go into detail. Even a few years ago before I became a Christian I would have been offended! In the first 10, well not even 10 minutes I wanted to walk out of the theatre. But I decided to see if the movie could redeem my interest—not my disgust—and it did not. If it hadn’t been so disgusting it might have been funny.
My Ratings: [Extremely Offensive / 3]

Sheena, age 16
Not a movie for a Christian to see. I am ashamed I even saw it. No age limit period for a “christian” can be placed on this movie. Not giving how much the Bible warns about sexual immorality, and this movie certainly promotes it. you’ll come away feeling “dirty” if you have any sort of conscience about you as a Christian. I’ll admit the movie did have some funny parts, but the filth far out weighs the comedy involved. Do not watch this one.
My Ratings: [Very Offensive / 1½]

Paul Brown, age 18
Please don’t throw stones at me. But, I tried to consider viewpoints from the female and male perspectives, not to mention the Biblical perspective. Female—All the more reason we women need to be more conservative and modest in our dress attire. What we wear and how we wear it makes a statement to those in our world that we come into contact with every day. Male—Men, you need to be looking for the qualities of what is on the inside of the woman. You never know when a woman may be trying to seduce you with what she is wearing. Yes, this movie may have been offensive to some, but it does make you stop and think. Proverbs 7:6-27 is about the crafty harlot.
My Ratings: [Average / 2]

Robyn West, age 36
Folks, there are PLENTY of less offensive ways to entertain yourself than to pay money to see this movie. The bottom line is that it is hard to laugh when an unsuspecting person is being conned, and you are essentially in on it while it is happening. The Hewitt and Weaver characters aren’t even the least bit likeable. You walk away from the movie feeling sick and reminded of why we all need a Savior. I’ve got a great sense of humor, but your soul has to be a little dulled to laugh at the misfortunes of their victims, which is what the moviemakers want you to do.
My Ratings: [Very Offensive / 1]

Ken, age 40
This movie was offensive to me because of the way it portrayed sex and marriage. The main characters whole point was to get money and lead the men on. They also blamed not having sex with their wealthy targeted men due to their religion (which was kinda a slap in the face to whose who are against pre-maritial sex) Hewitt and Weaver wore seductive clothing throughout the movie and even though it was very funny, I know it made most viewers feel as though they could never trust anyone again in romantic relationship. I wish I hadn’t seen it but we live and learn.
My Ratings: [Average / 3]

Kelly, age 18
I believe this is the first I actually stood up and walked out on. Literally within the first five to ten minutes of the movies start, I felt that this movie was going to be very sexually explicit. I do not watch “R” movies as a personal restriction, but I felt as though this could have and should have been rated “R”. Some may say that this movie gloried using other people for money and betraying trust for money.

Godside, age 19
I thought this movie was absolutely hilarious and down-right good. Although some different things were objectionable, I did enjoy the most part of it. I would not recommend anyone under the age limit it advises, though, to see this movie. It has adult content in it and things that parents might not be comfortable talking with their children over. All in all, I rate this movie very well.
My Ratings: [Better than Average / 4½]

Brook, age 16
This movie has a sick plot. The mother seduces men, gets them to marry her and then gets her daughter to seduce them so that she can divorce them. The movie is not for teenagers. There is a lot of emphasis on oral sex, some bondage. The mother pretends to have religious values that prevent her from having sex before marriage. It is not her values that prevent her from having sex, rather that she is a scam artist. The mother/daughter relationship is sick. The daughter is almost totally unlikable. Ray Liotta and Sigorney Weaver do have some very funny interactions, but the majority of the movie is forced acting and too long.
My Ratings: [Very Offensive / 2]

Terry Casto, age 53
A very entertaining movie, I thought, for adults strong in their faith. The most offensive being some references to God being anywhere and “a nosey SOB.” The conning women vow to “wait until they are married,” but this because they intend to con and get out before intimacy. This perhaps undermines those genuine chastity. Scantily clad seducers, Weaver and Hewett, are unscrupulous in their various cons and this is pretty funny. Sex pervades with innuendos and erections—a sheeted corpse. In the end, a redemption comes in the form of a willing promise of monogamy and the message of love being faithful. Lots of fun twists and turns and ridiculousness. I will see it again with my husband when it comes out on video.
My Ratings: [Average / 4]

Liz G., age 37
Parts that could’ve been left just a LITTLE more to the imagination, does not even begin to describe. But of course the camera Zooms in for Too close shots—that made me turn my head for fear I would be sick. I was going to leave, but didn’t—I wish I had!! Because it did not get any better—but just more Immensely Filthy! For 2 horribly never-ending hours I sat and let my mind, heart, and spirit be exposed to Pure Moral Trash! Not only this movie—but so many others—we leave ourselves open for such exposure. And to say it was just a movie and I was un-affected by it would be an Enormous Lie! What bothers me even more is the theater was filled with people of all ages—a good 4 rows of Jr. High kids! The couples behind us talking about their Baptist Church before the movie started—made me ashamed to think that’s where I would be the following morn. We’re Christians, Aren’t we supposed to be just a Little different! Makes me extremely sad to think we fall into the Easy Flow of just going to be Entertained and not thinking about a Thing More!! “In the World—But not of It” Are WE?
My Ratings: [Very Offensive / 2½]

Chris, age 18
Compared to most movies, this one was mild. It had sexual immorality, though no graphic scenes, and the jokes were not terribly crude. The clothes were too revealing for my tastes. It definitely encouraged lust. However, it also had people changing around in the end, except for revenge, which again, I don’t agree with. Overall, it was pretty typical for todays movies, offensive, but nothing out of the ordinary, and it provided some laughs.
My Ratings: [Average / 3½]

Michael Elliott, Movie Parables
…often very funny—certainly more so than anything else this young year…

Preview Family Movie and TV Review
…at least 1 use of the “f” word, while all sorts of other expletives and colorful phrases are also used…