for grisly afterviews of horrific and bizarre killings, and for strong language. 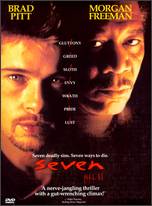 fall of man to sin

Detectives Somerset (Freeman) and Mills (Pitt) are set together on a case that finds them not only on the streets, in the dwellings of the victims, but in the library. Searching for clues to the seven deadly sins that are linked to each murder. Stunning and shocking clues that lead the two detectives to the next murder. Timely, exacting, and worst of all, patient, is the killer.

While the rating is given primarily for “grisly afterviews of horrific and bizarre killings,” without it the language would give it the same rating. Many F-words, profane name-calling, and blaphemous references to Jesus and God. While I don’t believe violence must be a biblically offensive matter, nor some off-color language, taking the Lord’s name must definitely be offensive to the Christian viewer.

Certainly not for children, as the MPA has set forth. If you are easily grossed out, or are at all squeamish, avoid this film. If you couldn’t stand the graphic detail of “Silence of the Lambs”, this is a bit worse on film.

Neutral
Neutral—This movie is possibly the most disturbing and dark movie I have ever seen. The tone was very depressing, and the gruesome murders completely grossed me out. The language was bad, as well. About half way through, I stopped watching this movie. However, the movie stayed with me.

It is extremely well acted and directed. The script was brilliant, and the pacing was perfect. I was intrigued. I came back and finished the movie the following day. I’m glad I did; it only got better. The ending was incredible.

I really have mixed feelings about this movie. It is very dark, gruesome, and has strong language, but it deals seriously with some profound issues. I would say that the moral teaching in this movie is that the world is completely riddled with wickedness, but we need to keep fighting and never give up on the world.

Although I agree with the moral statements in this movie, and I thought it was a brilliant thriller, I can’t wholeheartedly recommend this movie. Definitely not for people who are affected by gory scenes and absolutely not for children.
My Ratings: Moral rating: none / Moviemaking quality: 5

Nathaniel, age 18 (Canada)
Negative
Negative—This movie was definitely intriguing, but I couldn’t finish it. I rented it and watched it with my mom, and about 2/3 of the way through, we both decided to turn it off, because we were so sickened. It was not so much depressing as it was (almost) realistic—hey, people do commit sick and twisted crimes. Of course, I still want to see the ending, just to know what happens and if they catch the killer, but it’s not worth it to me to put up with all that yuck to find out.

What I saw of this movie was well made, otherwise it would not have affected me the way that it did. But just because a movie is well made does not mean it is uplifting. Please be careful in the movies you choose—because this one won’t be beneficial for you in any way.
My Ratings: [Extremely Offensive / 4]

HJ, age 18
Negative—Yes, certainly gruesome. My wife quit watching halfway through, even though she was finding it intriguing. didn’t want the nightmares to chase her. After completing the film I did find it well produced and captivating, but not one I would recommend to others.
My Ratings: [Extremely Offensive / 4]

TC, age 27
Comments from young people
This has to be the most well made movie I have seen in a long time. Brad Pitt and Morgan Freeman put on great performances as detectives. The language was the part that was the most offensive to me (75 f-words). The violence was gruesome, but they had to tell the story in some way. I wouldn’t recommend this to the squeamish or little children.
My Ratings: [Very Offensive / 5]