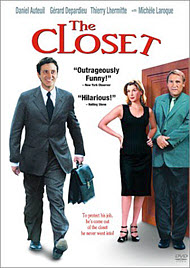 Few modern movies are a comedy of manners. And those that attempt to play around with cultural elements are often more preachy than funny. “The Closet” is a very funny French culture comedy. As you might have guessed, it is a farce on homosexuality. Specifically it is a culture comedy about lies, pretense, normalcy, popularity and workplace mores. The movie turns culture on its head.

In the film, Pignon (Daniel Auteuil) discovers that he is about to be fired because he is non-descript and boring. Just in time, however, a new neighbor arrives. The new neighbor, an aging homosexual who has had his share of cultural wounds, saves Pignon’s job for him by manipulating some photos Pignon has given him. The photos are mailed to his workplace, a condom company and Pignon’s lie wins him notoriety. What the culture once thought scandalous and evil is now thought of as scandalous and exciting. Cultural attitudes have changed but people are still prejudiced in their own way. Gays are believed to like young boys, pink clothing, etc.

Christians might be bothered by the homosexual elements in the film. Several plot points are contrived and some statements need to be questioned. For instance, the old photographer is helping him to discover himself and to keep his job. But Pignon’s blind adherence to the old man’s wishes—even to the point of making a public spectacle of himself—bothered me. He questions the old man’s tactics, but at no point does he refuse to do them. One wonders if he has his own mind or not. Gay people are seen as perpetual victims and the old man’s comments about heterosexuals—especially heterosexual women—are spoken as gospel. After awhile, these skewed bon mots can become quite annoying. At one point, he pontificates that straight women often fall in love with gay men as a kind of game of conquest. It’s all about the unattainable. What, don’t gay men believe that women can actually fall in love with them? Even the love a straight woman bares for a gay man is another way of victimizing gays. In the past, gay people have lied by omission and by commission in order to save their jobs. In the end, of course, the lie is found out.

Pignon “finds his manhood by pretending to be gay.” (Gayness is identified with truth and “being yourself” in most films so this was to be expected.) People of all generations might be tired of the subtle and not-so-subtle lectures in the film. I don’t know if this is a good thing. As a black person, I find that sometimes I start rolling my eyes whenever a film starts getting too preachy about racism. My gay friends also sometimes find films like this a bit much. In my opinion, we are given the gay viewpoint so often that we fear the film will become preachy at any moment. It doesn’t preach, but, like all movies about cultural victims, it blames.

We laugh loudly—the film is definitely funny—but our laughter is laced through-out with guilt. And for the Christian, the laughter is even harder because it is laced with some “falsely obvious” comments that we know other folks won’t think through. Let’s face it: in a country of so many cultures and so many horrendous racial and sexual injustices, we need to hear a little lecture once in a while. And it’s a classic case of “one man’s meat is another man’s poison.” Some people might consider it a film that opens the eyes of judgmental heterosexuals to the plight of gays. Others might be annoyed with the entire “if the shoe were on the other foot” and “let’s turn everything on its head” motif of the film. And some of us might not like it that one of the funniest movies of the season is really a lecture in disguise. Oh well, it’s the power of the media: just a spoonfull of sugar makes the medicine will go down. There is one semi-nude lovemaking scene and some double entendres. Not for kids.