for intense sequences of action violence and some sensuality 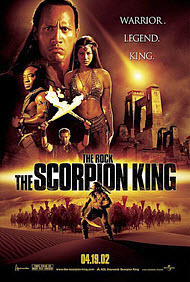 real magic and sorcery as described in the Bible

The city of GOMORRAH—what does the Bible say about it? What about SODOM?

Is there evidence that the Israelites once lived in Egypt as the Bible says? Has Joseph’s original tomb been found?

Archeologist love to study the artifacts of ancient Egypt. They try to take these relics and pictures and piece them together into a historical context. Each piece presents Egypt as the birth place of civilization. Even now, scholars are rewriting history to include information about a Scorpion King. They have found a Scorpion Tableau that tells about a battle between a Scorpion King and King Naquada. The purpose of this conflict was to unite Northern Egypt. Archaeologist now believe that the very first writing system may have been developed to catalog the Scorpion King’s riches. They also assert that this form of picture writing predates all other forms of known writings by 200 years. His burial site even contains a model of his palace. It is out of this historical investigation that we have the fictional unveiling of “The Scorpion King”.

Hollywood has enjoyed many successes from well built men. We’ve had Steve Reeves as Hercules, Johnny Weissmuller as Tarzan, Arnold Schwarzenegger as Conan, and who can forget Lou Ferrigno as The Hulk. “The Scorpion King” is a 21st century attempt at this successful area of film industries stock and trade. Dwayne Douglas Johnson (aka “the Rock”) does an outstanding job in this sword-and-sorcery genre. He has the physique and the finesse to carry out the role. Mr. Johnson is not only a professional wrestler (which is all an act anyway), but a former college football player. He has a likable wit and charm. Who can resist that raised eyebrow? Dwayne “The Rock” Johnson looks like what a barbarian is supposed to look like.

Dwayne reprises his exaggerated cameo from “The Mummy Returns”. This film is a prequel for Universal Studios and a financially lucrative spin of a popular franchise. It is their latest attempt at B-movie action and that cult-campy humor we love to enjoy. Dwayne “The Rock” Johnson’s roots in this flic are found in a character named Mathayus.

Mathayus is one of the last survivors of the Akkadians, an ancient tribe of assassins. He is hired to kill or capture the blood-thirsty warlord Memnon (Steven Brand) who is aided by a sorceress (Kelly Hu) that enables him to rule with a prophetic advantage. His kingdom headquarters are in the city of Gomorrah. I’m sure that any resemblance to the famed twin cities of Sodom and Gomorrah is purely intentional. When Arpid the thief (Grant Heslov) enters the city with Mathayus he declares “hey, this isn’t so bad.”

Mathayus is also aided by the Balthazar (Michael Clark). The two of them try to unite the oppressed people in the land to defeat Memnon.

The violence in “The Scorpion King” is way over the top for other PG-13 films of this genre. It’s not as scary as the two “Mummy” movies, but Director Chuck Russell (“Nightmare On Elm Street 3”) gives the swordplay a gruesome accent. The addition of well-timed sound effects, blood, and severed heads can and should be too disturbing to ignore. Some may disagree, but even the MPAA expressed their concern to Universal as they looked at some of the dailies.

The sensuality is, as Roger Ebert expressed, within “one centimeter from an R-rating.” This is more than the adolescent peek-a-boo looks that Hollywood used to throw in—there is a lot of skin throughout this film (what ever happened to cover-ups and sunblock in the sand?!). Add to this prostitution, pre-marital sex, harams and sex with more than one partner, and it’s obvious who the producers are aiming at. Gut reservations cautioned me to keep my 11 and 16 year old sons at home, and I’m glad I did. I strongly encourage other parents to exercise such caution as well. Wait for the better ones that are sure to be released in the next few months.

Comments below:
Positive
Positive—Dwayne “The Rock” Johnson was a lot of fun. He is a much better actor than Arnold, Chuck Norris, Jean-Claude and many other action heroes, although that is not saying much. His nemesis was pathetic. I found it impossible to believe this guy could take on Dwayne “The Rock” Johnson in any man to man physical contest. Nor did the villain seem particularly menacing otherwise.

One of The Rock’s WWF compadres or Michael Duncan Clark would have been much better as villain. There was a lot of gratuitus beautiful bodies, many scantily clad. This made the sexual content high for PG-13. There was very little profanity, if any.

There were few role models although an occasional positive trait would be featured, most notably in the Rock’s character. Violence was high, but was expected.

If you take kids (and I would not take preteens) be prepared to talk about sex, violence, and divination. I was entertained but learned little, if anything.
My Ratings: [Average / 3]

Mark L. Gilliam, age 40
Neutral
Neutral—My husband and I took our thirteen year old nephew to see this movie. It’s a great action packed film. There was far too much, almost complete nudity for a Christian’s taste. If I would have known previously, I wouldn’t have brought my nephew to see it. It is not a “serious” movie as the previews would lead you to believe. There was premarital sex and scenes alluding to multiple sex partners. Altogether the movie was entertaining, but beware of its risque attributes.
My Ratings: [Better than Average / 3]

A.F.
Neutral—Well, from a Christian perspective, the amount of killing, revenge, and violence was a bit much. The outcome has absolutely nothing to do with a person’s character but, rather, destiny. Whoever is strongest will be King. The sensuality was not as bad as I expected it to be, honestly, having read the book beforehand. I will say that I was relieved that some of the scenes in the book were not portrayed to their fullest color in the movie (ie. Cassandra in the bath). However, the moral of “Mathayus” (Dwayne “The Rock” Johnson) changes throughout the movie from killing for money/revenge to defending a dying people. In that respect, it was a good story. But, the fact still remains that it was all about who was had the biggest muscles and strongest arrow shot. Not exactly an excellent Christian character-building movie.
My Ratings: [Average / 3½]

Melissa Gibson, age 18
Negative
Negative—I will admit that as far as action flicks go, I would say this movie did an outstanding job. The choreography for the fighting scenes was among the best I’d ever seen in a film. The plot was also well-done. However, and unfortunately, the immorality being flaunted around so much really got under my skin. Why would the action of an ancient Egyptian king be taking place in Gommorah (which is not located in Egypt) if an intentional statement from the creators of the film was not trying to be made?

In addition, the sorceress was always dressed or undressed as uncovered and exposed as they could make her, enough to say that “nothing was left to the imagination.” The violence of the movie, though toned down on the blood and gore aspect, still appeared very pronounced at points. I believe the PG-13 rating was a joke. Treat this as an R-rated movie.
My Ratings: [Very Offensive / 4]

This film is not offensive. Just not very good. Predictable, self reliant on fight scenes and a poor bring down from the great Conan Era.
My Ratings: [1]

Preview Family Movie and TV Review
Comments from young people
Negative—This was probably the worst movie that I have ever seen in my entire life. I mean, I can’t believe that I wasted MY HARD EARNED MONEY on this terrible flick. I wouldn’t even waste my parents money on this film either!!! There was absolutely no plot whatsoever, except for THE ROCK (who by the way, can’t act to save his life) who likes to go around and kill people the entire time.

And, there was like no history for this movie at all. I mean, sure, he gets stabbed with an arrow that is infected with scorpion poison, but come on, that barely had anything to do with this movie at all. The sorceress was dressed sort of innapropriately, but that wasn’t the problem… the big problem was how they mixed modern music, and modern language in with this movie, which was set back around 1,000 years ago.

He says stupid stuff that we say today, which did not go with this movie at all. Please don’t waste your money on this horribly boring and dumb movie.
My Ratings: [Average / 1]

Noah Cowart, age 15
Neutral—“The Scorpion King” is a nice movie overall. It isn’t ultra-great, but it’s not trashy either. On the positive side, we have Dwayne “The Rock” Johnson’s character evolving from “Oh I’m only in it for the money” to his desire to defeat the tyrant Memnon and devotion to family (The Rock will go to extreme lengths to protect his brother). The near-nudity of the sorceress (there’s a lot of skin but no “strategic areas”), the Scorpion King’s pre-marital dalliance with said sorceress, and the extreme violence may offend.

However, one can note that Gomorrah is not portrayed as a positive place (prostitution and all), and Sodom is alluded to as being just as bad. The majority of the objectionable behavior (multiple sex partners, murder, etc.) is associated with Memnon, the villain, so it’s not portrayed positively.
My Ratings: [Better than Average / 4]

Matt Quinn, age 17
Negative—I thought this movie was pretty cool. It didn’t have a really good story line but provided action for my taste. No blood really a severed head in there but nothing else. In reference to nudity there was no full nudity. The only partial nudity was when the sorceress stood up in the tub and you could see her breasts a little. Her hair covered most of it though. Other cleavage was the prostitutes in the street were wearing bikini style tops but all the women had large breasts which “popped” out so you got an eye full.

Good movie for 14-15 and up. Some stuff could of been left out in reference to women’s bodies to make it appropriate for younger kids. Pre-marital sex was implied twice. Once with the Rock and the sorceress and also with Balthazar. Balthazar woke up next to a woman and when he got up you could see another on his other side. Partially comical but not appropriate.
My Ratings: [Better than Average / 5]

Anon., age 15
Positive—I went to see this movie the second day it was out. I’ve been a fan of all of the Mummy movies and yet again! I’ve been blown away. I loved this movie… it was enchanting, romantic, adventurous and suspenseful. The only thing I didn’t like was the comment about Soddom and Gomorrah. Un-called for, but also I did love the fact that there was romance in it. You find yourself cheering for the scorpion king through out the whole movie. I loved it! Dwayne “The Rock” Johnson has a good career ahead of him if he keeps on picking such great movies, and the girl who played the sorceress is so cool too!
My Ratings: [Better than Average / 5]

Anna Arango, age 11
Positive—I enjoyed this movie very much. My only problem was this: The “King” and a friend or prisoner of his go to Gommorah and the friend says “Ah, Gommorah, no better place to be, unless you’re talking about Sodom.” I realize that the evil king Memnon rules Gommorah, but it was totally uncalled for. But other than that, the movie was the stepping stone that Dwayne “The Rock” Johnson really needed to advance his career. A must see, in my Book.
My Ratings: [Better than Average / 5]