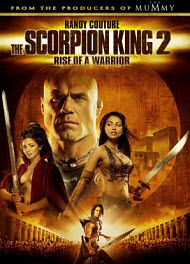 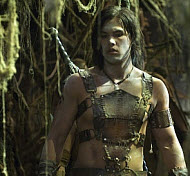 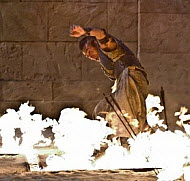 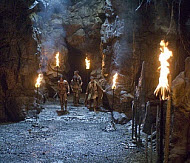 real magic and sorcery as described in the Bible

Here is a film about a fictional ancient civilization with fantasy powers. There is magic, but not witchcraft. Sometimes people confuse the two. Magic can mean witchcraft, but in this movie, like most fantasy movies, it is no different than fictional superpowers.

The plot is rather simple. Mathayus seeks to deal justice to the king, who murdered his father when he was young. But the king has acquired superpowers that he can use against Mathayus. The only way for Mathayus to get the powers he needs is to retrieve a sword from the most deadly place: the underworld! So, with his friends, he travels to the underworld to get the sword, but then he must hurry back, because the wicked king is progressing on other evil plans to murder people for entertainment.

It is better that Mathayus honors his father by wanting to avenge his murder, as opposed to taking vengeance for a wrong done to himself. Nonetheless, the revenge aspect of the story is questionable, because vengeance is God’s. Some will believe that Mathayus was right for honoring his father, others will believe that he was wrong for taking up the matter. I can respect either opinion.

Other than that potentially questionable detail, there’s nothing offensive about the mere essential plot details. Some of the wickedness is mature, but evil is always portrayed as bad. However, there are a few offensive messages that come from things that aren’t really part of the plot, but still stand out. When it all adds up, however, none of these get to the level of characterizing the film. For example, at the beginning, boys are violently fighting each other—as in, swords—as part of training to become warriors. A boy disobeys his father to enter in the training, to become a hero (why did they have to add that?). There are a few underhanded lies told. It is mentioned a few times that the people believe in gods (plural, so it’s obviously not the true God).

The heroine wears clothes that reveal some cleavage and belly, but not much shape can be seen under the clothes. Another woman is shown from the waist up, with only her nipples covered; this is about five seconds. Some men are occasionally shown shirtless; Mathayus’s armor reveals his belly (stupid for armor, I know). There is an occasional crude sexual comment, but nothing explicit. After Mathayus becomes a bodyguard, he enters a room full of scantily clad women; what follows is left deliberately unclear.

The language is mild and only occasional. There’s almost no gore. There is some blood shown and some slow motion hand-to-hand combat. There are also skulls and scary monsters. In one scene in the underworld, disgusting dead bodies (and fragments of them), with worms in them, are shown coming to life. This is reasonably brief.

There are positive messages. Perseverance is the biggest of these, the characters are strong and fearless, but not in a reckless way (and when it is in a reckless way, the character regrets it later). When a wicked woman tries to seduce Mathayus into becoming her sex slave, he refuses the temptation, saying he’d be a fool to do it—a quality not often seen in movies these days.

As I said before, Mathayus is passionate about honoring his father. The heroine and a friend risk their lives to save a large group of people who are about to be murdered. At the end of the movie, when the heroine realizes how foolish she was at the beginning to pridefully insist that she was a tough macho and butt into Mathayus’s business. When I saw that at the beginning of the film, I thought I was going to have to add it to the list of negative elements, but I was pleasantly surprised to see that she was actually humbled—which is another good quality rare to movies these days!

Overall, this is a decent fantasy adventure film. It’s not the best out there, but still fairly good. Use discretion, of course, but I think the good outweighs the bad, and the bad isn’t too prominent.