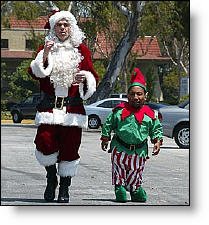 Here’s what the distributor says about their film: “This is the story of two criminals who disguise themselves as Santa Claus (Thornton) and his elf, traveling across the country to major malls, using the good will people have towards Santa to rob the stores blind. The plan is going great until the two baddies meet an introverted 8-year-old boy who reminds them of the ‘true meaning of Christmas’.”

Positive
Positive—If anyone is tired of holiday cheer and holiday commercialism, then this is the perfect movie for you. This is a dark, dark adult comedy that is completely cynical its outlook on life. I found it amusing because I was in a Scrooge-like mood when I saw it.

This is not a movie for anyone under 18 years of age. Nor is this a movie for those who are easily offended, because there is plenty in it to be offended about.
My Ratings: [Extremely Offensive/3]

Hillari Hunter, age 42
Negative
Negative—Although there were some silly scenes in this film, I could not enjoy it due to the extreme use of the actors taking God’s name in vain. Avoid the movie at all costs!
My Ratings: [Extremely Offensive/3]

Michael Mace, age 24
Negative—I went to see this movie last night. Since its trailer, I’ve been meaning to see it because I thought it would be very funny (though I knew it was for adults, not children). Truly, truly, filmmakers and Billy Bob Thornton crossed the line.

I’ve seen many offensive movies over the years, but this one really topped them all. While the trailer advises the audience that it is just for adults, the movie has numberless child actors in it, that made me wonder “What were their parents thinking (drinking), when they permitted their children to take part of this movie?!!!

The language is extremely offensive, and while I can sometimes swallow the use of the F— or Sh** words, Billy Bob Thornton just became the king of giving our Lord a last name (God D…) and F JC, F C etc… I mean, it was not necessary! The movie could have done “ok” without all of this blaspheme against our Lord!

Plus, having the main child actor walk on Billy while he’s trying to “get jiggy with” Santa’s sister, was just appalling! I just cannot describe the bad taste this film left in my mouth and the guilt I feel for even watching it to the end: It’s been bothering me all night. All I could do since I got out of the theatre is pray to our Lord to forgive these men and that He softens Billy’s hardened and lost heart!
My Ratings: [Extremely Offensive/1]

Dina Avila-Jimenez, age 35
Negative—First off, if you plan to see this movie and your a Christian guy, ask yourself why you are seeing this movie and why you would want to play with fire. There is so many sexual undertones and implications in this movie it’s sick. Watching two people have sex like three times in the movie (even if you don’t see any nudity) it’s enough to tempt any man. Stay away!
My Ratings: [Extremely Offensive/2]

Scott, age 29
Negative—I made the mistake of taking my wife to see this film. I was ashamed. If you’re a single guy do not and I repeat DO NOT take a date to this movie. The film is kinda funny for a few laughs but go by yourself of another guy. Thorton goes over the deep end with this one…
My Ratings: [Extremely Offensive/2]

Bob C, age 40
Negative—I found this movie the be extremely offensive. And I can watch a P.T. Anderson film without a flinch. The (slightly) bright, sensitive ending didn’t quite make up for the other nasty and dark 85 minutes. …The acting was adequate, not terrible but certainly not groundbreaking. The only reason a Christian would see this movie for Christian reasons would be to see Billy Bob’s performance as a (VERY) twisted and backward Christ figure. That comment may be reaching a bit, I’m afraid. There is a scene of implied sodomy which does set up for an ironic line: “I’ve …but I never fornicated anyone.” There are some perverted uses of classical music that someone probably thought was artistic…
My Ratings: [Extremely Offensive/3]

Alex Brunk, age 18
Negative—Though this movie is vulgar in the extreme and offensive for that reason, it is also deeply moral. I think it’s unfortunate that these reviewers have not looked on Billy Bob Thornton’s character from a more Christian perspective. We see how disgustingly the character lives his life, but we also see how deeply unhappy he is about it. He even turns to suicide because he knows his life desperately needs to change but he doesn’t believe he has the power to change it.

However, beneath all of the gross behavior, he is still redeemable. When he begins to care for other people, he learns to lead a better life. Even when his partner in crime turns on him, he is upset not because he’s been betrayed and thinks he’s going to die, but because his partner and the partner’s girlfriend are so crassly materialistic. This movie represents the true spirit of Christmas.
My Ratings: [Very Offensive/4]

Jerome Clarke, age 29
Negative—I thought this would be a funny movie to see with my kids; I was wrong. I thought the midget was funny at times. What I didn’t like was hearing the “F” word all the time and the constant profanities and it was embarrassing watching this with my children during the sexual scenes with the “bar maid” or Santa’s sister. (in the car, in the jacuzzi, and in the spare bedroom. I didn’t like Billy Bob Thornton, and the way he treated the boy he exploited—he was continually unappreciative and treated the boy like ####. Billy Bob Thornton is grungy and used filthy language throughout the whole movie—he is just total grunge all the way.

I don’t recommend this movie to anyone; and especially children! This movie has bad language and distasteful grungy sexual adult humor and I wasn’t laughing at all—The Austin Powers’ movies kept me laughing, but “Bad Santa” was BAD!
My Ratings: [Extremely Offensive/1]

D.R., age 40
Movie Critics
…a one-joke movie that will go to absolutely any length to be vile and offensive in every scene…

Lou Lumenick, New York Post
…“Bad Santa” is, without question, not for the children. It is, however, just the cup of rancid black-comedy eggnog for anyone fed up with holiday cheer in all its manifestations. At last there’s a Christmas movie for people who hate Christmas… If only it were a better movie.

Ty Burr, Boston Globe
…a demented, twisted, unreasonably funny work of comic kamikaze style… defiantly uncouth …foul-mouthed… You expect a happy ending, but the ending is happy in the same sense that a man’s doctors tell him he lost his legs but they were able to save his shoes. …There are certain unwritten parameters governing mainstream American movies, and “Bad Santa” violates all of them…

Roger Ebert, Chicago Sun-Times
…It’s surprisingly witless and one-note, so this is only for the truly demented Grinches out there.

E! Online
…Quite likely the most subversive Santa movie ever made… not everybody’s going to be prepared for the kind of unmistakably R-rated brand of take-no-prisoners comedy that would have made Scrooge blush.