for graphic sexual language, and for nudity. 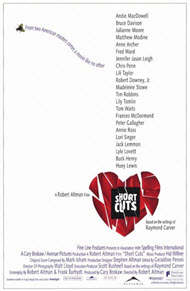 I’ve always admired the style of director Robert Altman. He basically likes to show us situations, as if they are not even scripted, in a naturally flowing setting. M.A.S.H. and the under-appreciated “Popeye” were excellent examples of this. But his other films, like “The Player” and “Nashville”, take good stories and ruin them with his insistence that there needs to be nudity and sex in his films.

Robert Altman’s “Short Cuts” is really about nothing in particular. It follows the situations of many different groups of people and how their lives cross and interact without them even knowing. The movie is quite brilliant in how these lives weave in and out of each other, but I ultimately have to pan the movie because of its language, extreme sexual content and its portrayal of people who do not have God in their lives.

There really is no set plot except that you get to see people deal with problems in their lives and most of them are a sexual nature. One family involves a police officer (Tim Robbins) who is cheating on his wife (Madeline Stowe). His wife knows he is lying but doesn’t ever confront him about it. Instead, she just gossips about it with her sister (Julianne Phillips), who we eventually find out had been cheating on her husband (Matthew Modine). In yet another family, the husband (Chris Penn) barely makes ends meet by cleaning pools while his wife (Jennifer Jason Leigh) makes money with phone sex.

There are a few positive families and couples. One family (Andie McDowell and Bruce Davison) is dealing with an emergency with their son while facing the return of the husband’s father and getting harassing calls from a lonely cake baker (Lyle Lovett). They all eventually work out their differences in a positive manner. And despite the fact that they live together, the waitress (Lily Tomlin) and her boyfriend (Tom Waits) show a decent and caring side to their characters when she feels guilt and concern from hitting the boy with her car.

Altman wants to show us real life and he does succeed in showing us different lives that could be quite real, but he refuses to show us anyone who is religious at all. It seems that most of the characters are opportunities for ministry. I did like the fact that the Madeline Stowe character was willing to put up with her husband’s lies in order to keep her family intact, but her release was to pose nude for her sister’s artwork.

Shouldn’t she be praying for her husband? Shouldn’t the Chris Penn character try to get his wife to stop the phone sex, as any concerned husband should do in that situation? It isn’t surprising to not see religion shown in a positive way in an Altman film, since he is often outspoken about traditional values and what most Americans perceive as right. In fact, in another scene, a group of fisherman who discover a dead body find it more important to fish than to immediately contact the police. Even the dead are not treated with respect by Altman.

So do I praise the film for its storytelling? Yes, but I really can’t recommend it. From the extremely explicit dialog of the phone sex to the blatant lying of the adulteress husband, this film should certainly be off limits to anyone under 21. And adults should also take care when approaching this film. The film does entertain you, as you watch how these lives interact, but you will come away feeling depressed and guilty.