for sexual content/humor and language 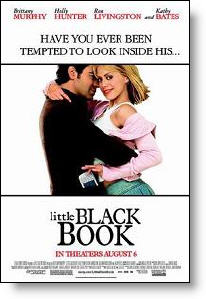 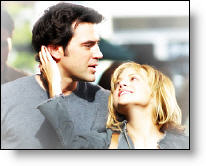 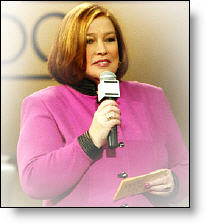 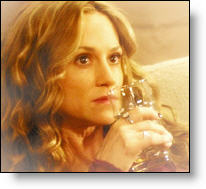 “Have you ever been tempted to look inside his…”

Stacy Holt (a cute, sensitive Brittany Murphy) has spent her life under the notion that precise planning and Carly Simon music will bring true happiness. Her single Mom lovingly taught her that “luck is when preparation meets opportunity” and that Carly’s music always gets rid of the chaos life throws us into. Empty promises at best. An empty world view at worst.

Stacy’s life long goal is to become at least an assistant to Diane Sawyer and cut herself a nitch in the respected world of TV news broadcasting. Unfortunately, the college education and ambition she has put forth has dropped her into a dead end goto-girl position in local cable TV. Her professional life is just hum-drum until she lands a co-producer job with the national “Kippie Kann Show,” a sort of wannabe Jerry Springer/Jenny Jones type of reality show. Kippie Kann (played by Kathy Bates) is on the brink of being cancelled and is seeking a new angle to get her tanking ratings up and the show back on the top of the heap.

Stacy suggests a show idea based on the Palm Pilot (or the “little black book” of the current generation) of the person you’re dating, which might contain evidence of a cheating guy or gal. This idea, though tossed out at first, is picked up and stolen from Stacy by her new pals at the network. Thus showing a glimmer of how cut throat the business can be. It is through this “little black book” idea at the conclusion of the film that the true colors of all involved in this mess float to the top.

With the help of her new friend/mentor Barb (Holly Hunter in a more cynical version of her character from “Broadcast News”) young Stacy is coerced into seeking out and interviewing (supposedly as possible guests for the show) past girlfriends gleaned from her current boyfriend Derek’s (Ron Livingston) own Palm. She quickly finds Derek hasn’t been completely honest with her and fears she’s being cheated on. She lets her lust for the truth and ultimately revenge guide her through the rest of the film—using lies, false interviews, and painfully humiliating betrayals to draw out her possible rivals. Her real dreams of honest broadcasting are thrown aside as she allows this train of revenge and vanity to totally engulf her life and finally derail in catastrophe.

She finds much in common with Derek’s old flame Joyce (perfectly done by Julianne Nicholson) and eventually becomes good friends with her. They have a great time becoming close and Stacy learns much about what it really means to be in love as Joyce’s character relates her feelings for Derek and her example of honesty and caring for others. At this point, Stacy painfully realizes her deception will hurt this relationship, but is in so deep she doesn’t know how to get out of her ruse. Stacy has allowed others to influence her decisions and has made bad choices that will come back not only to haunt her, but those she really cares for as well.

The final act is a redefining of what Stacy has gone through to get what she wants and turns out to be her worst nightmare. She is the guest of honor on the very show she co-produces. Everyone is drug through the muck and hurt almost beyond repair, all for the sake of the ratings!

Oh yeah, and did I tell you this is a romantic comedy? Not much of the humor is redeeming, although I did giggle at some of the more toned down slap stick type scenes. I did not find humor in canine digestive problems, out-of-control people, a gynecological exam, or nose-picking. It is unfortunate that most of this film’s heart is mean-spirited and sends mixed messages that revenge is the best medicine as long as you acknowledge a “higher being” from time to time. It also shows how selfish people (Barb—Holly Hunter’s character) step on the fragile emotions of others on their way to the “top.” Success is not gained by slicing through other people’s feelings, breaking spirits along the way. True success is standing up for the moral rights God has set down for us and being honest and worthy of people’s trust in the workplace as well as everyday life.

I have noticed that the film industry has been obtaining PG-13 ratings these days by cutting back on the profanities. This movie only had “he**” exclaimed once. But, alas, they are putting more and more sexual promiscuity, greed and non-commitment in the content instead. Parents might well be lulled into thinking this PG-13 movie would be fine for their kids to watch, without viewing it before hand. Be warned, even with this rating you should still see it first or at least accompany your kids, especially younger girls and discuss the consequences of multiple sexual partners, what it means to really have unconditional love for your partner, and what God has to say about everything from true love, one partner for life relationships to deceit and selfishness.


Families can talk about the ethics of Stacy’s treatment of Derek’s ex-girlfriends, why she accepted a job she could not feel proud of, and her lack of professionalism in the office. Why did Barb make the choices she did and what will happen to her? Why do people watch reality TV programs like Kippie’s? Also we find many young adults hoping to avoid the difficulties they see in other people’s marriages, turning to living together outside of marriage these days. But does this solve problems or create new ones?

Suffice it to say reality TV is generally a nasty business, and it won’t get any better. It is often cheap and unforgiving. If any question gets put across in this film, it is who can we trust with our lives. It certainly isn’t a Godless world view or sit-com and reality-TV morals. The main character discover this out in a painful, bittersweet way. Stacy laments she has spent her lifetime preparing for a lifetime, but to what end? Living together unmarried isn’t a way to right any wrongs, but makes another wrong in itself. Knowing the damage that sexual sins inflict on mankind, Jesus commands us to avoid them at all costs.

The only way to make big dreams come true is to trust in God and to faithfully request His guidance in all that we do. Grace under pressure is what young girls of our generation need to be taught. There are no strong women out there who have truly won the fight through sheer willpower and the idiotic concept that we all have a secret inner strength. The “inner power” we seek, not just as women but all human kind, is through our Lord and Savior Jesus Christ. His guarantees are sure. We must know who to trust with our lives and that person should always be Jesus. His example is the one true way to live. Not by might, not by power, but by My strength says our Lord. The Psalmist said it well: “Where does my help come from? My help comes from the Lord, the Maker of heaven and Earth!”

Negative—If I can spare one person the agony of sitting through this movie, I will have done my part. We went to see this movie with some friends. As a hokey chick-flick, I wasn’t expecting much. But our wives came out shaking their heads in disbelief at how bad this movie was. The movie was boring, uninspiring, and had no redeeming qualities. The acting was terrible. This could have been an entertaining movie. If you do go see this, take your pillow or a strong cup of coffee.
My Ratings: [Very Offensive/1½]

Michael B., age 33
Neutral—Of the chick-flick genre, this one has a unique story line, a few interesting characters, and an interesting ending. There are some un-needed sexual innuendos, and shots of Brittney in her underwear, but the over-all message teaches you to be honest with yourself and people.
My Ratings: [Average/3]

Debbie Wilson, age 29
Neutral—…I thought it was adorable in the romantic comedy genre. Slightly objectionable by means of cheating and innuendo, but all in all, it is a sweet tale that shows if you work hard, it’ll pay off in the end, even if you have to go through a lot of bad times in the meantime.
My Ratings: [Better than Average/4½]

Becky, age 18
Comments from young people
Neutral—I thought this movie was somewhat cute. However, it did have quite a few sexual references and the talk show scenes were very dirty, also, I wasn’t much for Brittany Murphy parading around in a t-shirt and underwear. Very sad and even a little depressing, but the ending was very sweet and a enjoyed a few of the jokes.
My Ratings: [Better than Average/3½]

Sarah, age 13
Positive—I like this movie a lot, maybe the fact that it’s so different then other chick flick movies, if you’ve seen it you know, if you haven’t don’t worry I won’t tell you the ending or anything. I didn’t really see anything wrong with this movie outside of 2 things that come to mind, when she ends up getting a check up from Joyce and she’s looking for warts, and she’s a gynecologist, but it really isn’t done really crudely, it only lasts a little while, and I thought was some what funny. 2, when the p d a starts vibrating and Barb put’s it in her pants and says give me a minute, and number 3, there are a few pictures of Joyce wearing a thong, that’s not that bad either because she’s not trying to be sexy or anything, she’s hugging him in tank top, not skimpy by the way and a thong bathing suit bottom, his moms even in the picture to, outside of these things it’s a good refreshing movie, watch it!
My Ratings: [Better than Average/5]

Michelle Bob, age 14
Positive—I think this is a great movie. Except, most kids about 9 and under might not like it, because there is a lot of kissing. I loved it, but there was kissing in almost every scene. But it showed that true love is better than any medicine any doctor can give you.
My Ratings: [Better than Average/4½]

Angela, age 11
Movie Critics
…derives its few laughs from a farting dog and an accidental gynecological exam. This book is better left closed.

Jason Anderson, The Globe and Mail
…Scratch this viewing appointment off your calendar…

Claudia Puig, USA Today
…has a mildly positive message, but… sexual humor and an overall distasteful and mean-spirited tone…