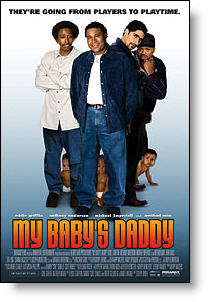 To set the story, “My Baby’s Daddy” begins with an animated sequence that takes the audience back to when Lonnie (Griffin), G (Anderson), Dominic (Imperioli) and No Good—G’s imprisoned cousin (Method Man) were troubled youngsters spending their time causing trouble. The biggest troublemaker was No Good. He perpetrated, with the help and support of his cast of friends, a variety of thefts at a local candy store. Although this helps the audience understand why “G’s” cousin (“No Good”) has been incarcerated, it clearly condones—even celebrates the theft as a way for the young kids to get things that they desire (candy in this case). To the films credit, the consequences of stealing are clearly spelled out as is evidenced by “No Good” having been incarcerated.

For the remaining ninety-seven minutes, the movie does not take the audience anywhere near a moral high ground. The audience must wait until the last 10 minutes of the film to see some level of moral direction and even then—it is juxtaposed to the standards found within the Bible, the foundation of moral clarity.

The story begins with each of the cast members enjoying a night out partying. The presence of alcohol and sexual impropriety are rampant as is usually expected in a Hollywood party scene. Each of the characters, and their partners, are introduced to the audience through a series of sexual escapades the unmarried couples have together. The lewdness begins with Lonnie performing oral sex on his girlfriend without her noticing, and Dominic engaging in sex with his girlfriend. After this scene, each of the female leads has become pregnant out of wedlock—in direct contradiction to the Biblical standards of marriage where God has called young men and women to remain chaste until they marry the woman or man that God has for them.

After Lonnie, G, and Dominic learn of their girlfriends’ pregnancies, they stock up on magazines and other paraphernalia to assist them with learning how to be daddies. In addition to the parenting materials, they buy several pornographic magazines and alcohol (hardly appropriate for new parents, let alone adherence to Biblical standards for decency and holiness). The scene is under-scored by a seemingly pornographic video that, despite the sounds and characters sexual innuendos, turns out to be a “science” video of a woman giving birth to a child.

The rest of the movie is more of the same Hollywood scene of partying, illicit sex, and celebration of impropriety as it tries to tell the story of how three men learn to become fathers. By the end of the movie, Lonnie, G, and Dominic decide it’s critically important to be a father figure to their children—something they missed while growing up in their neighborhood.

Language—There is profanity sprinkled liberally throughout the film. Approximately forty to forty-five times a variety of curse words were used including “sh**,” “da**,” “f-word,” “G-D,” “N-word,” and several references to a male and female anatomy using colloquial curse words.

Sex/Nudity—There is no nudity in the movie (with the exception of a one-second shot of a child being delivered from the birth canal, however, only the top of the child’s head was seen). There are several scenes of one of the girlfriends wearing lingerie that doesn’t cover much of anything. Each of the party scenes show couples engaging in sex.

There were three main party scenes where it was both implied and shown that couples were either engaging in, or would be engaging in pre-marital sex. The use of alcohol at the parties exacerbated the issue of sexual impropriety in this film. In one scene in particular, there is a machine that dispenses condoms outside one of the rooms where couples are encouraged to engage in pre-marital sex.

Much to the surprise of Dominic, his girlfriend turns out to be a lesbian (with the mid-wife who helped deliver their child). In order to prove this over-the top relationship, the two women engage in handholding and a deep kiss for Dominic to witness. Dominic is appalled and is upset at the idea that his child would have two mommies and no daddy. He later accepts this behavior as normal and is seen making out, and ultimately on the verge of having sex with another woman.

The characters, especially Lonnie, make reference to breast-feeding as an activity that they would enjoy—suggesting that before the child were to receive some breast-milk, that “daddy” would have to be first to “taste-test” the milk for the child. As a matter of fact, one scene included G mixing breast-milk with his regular milk for “added taste.”

Theft—As mentioned previously, the opening animation showed “No Good,” G’s cousin, pulling off a robbery of the local candy store. When “No Good” appears in the film (after finally being released from jail), he and his cousin go to a store that sells baby products. G is depressed that he has barely enough money to buy anything nice for his baby. He and “No Good” go to the checkout where G realizes he left his wallet in the car. He leaves and asks “No Good” to wait there. “No Good” decides that he is going to steal as many supplies as possible using a fake pistol and a diaper over his face (to add to the “comic relief”). The rest of the customers, obviously not shaken by this turn of events, begin calling out items that the child may need including bottles, food, and rattles among other things.

Drugs—One incident included G’s father-in-law explaining how he settled down to become a good parent for his children. During this conversation, he opens up a rather large beer and a cigarette of marijuana to share with his future son-in-law.

The only relatively positive outcome of the movie, despite the immoral way in which the relationships began, G ends up marrying his girlfriend and all three fathers claim that the “Three little babies turned [the fathers] into three grown men.”

The movie is funny at times, but the majority of the humor is based on sexual innuendos. This movie is typical of movies in the Eddie Griffin, Damon Wayans venue where the primary “laugh-factory” is built from sexual innuendo and crude jokes that poke fun at all groups but mostly is generated around exaggerated and perpetuated stereotypes of certain groups of people. That was probably the second-most bothersome part of this film. Derogatory words were used to refer to blacks, whites, Hispanics, and Asians. If words weren’t used, obvious negative and exaggerated stereotypes were used to reinforce preconceived notions of how certain races and classes of people behave.

Personally, I would not recommend this movie to anyone. While the acting and moviemaking quality was pretty good, there is not enough positive in this movie to warrant any individual to see this film. It’s crude; lacks originality, and above all, the activity of the characters tend to be in direct contradiction to the Word of God.

E! Online
…Diapers, even from three babies, can’t stink worse than this…