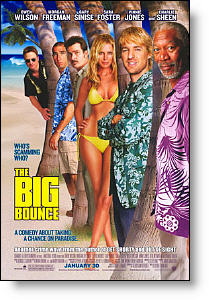 A “bounce,” as described in this flick, is a thrill experienced while being involved in something dangerous, exciting and on the edge. “The Big Bounce” involves characters experiencing this rush while engaging in some kind of criminal activity, but for the audience the real “bounce” happens when they buy their ticket, letting someone rob them of their hard earned money in exchange for a flop.

Jack Ryan (Owen Wilson) has a criminal record as a scam artist, but at the start of this story has an honest job working for a construction company in Hawaii. After a fight with his foreman—in which he hits him with a baseball bat—Jack is fired and sent to jail for a brief stay. Upon his release, he is instructed to leave the island, but is soon enticed again into his old ways through a fellow criminal and then by Nancy (Sara Foster), the mistress of the construction company owner, Ryan Ritchie (Gary Sinise).

From beginning to end, the leading female character, Nancy, is central to the plot of the story, but operates more as a sex symbol than anything else. When we first see her, she is sunbathing naked, of which we see her backside. Jack Ryan is first allured to her because he watches her walk up and down the beach in her bikini. (They really take their time on one of these shots, enhancing it slow motion.) For a character who could have been developed for her thinking, they really sell her short.

Aside from Nancy’s sparse attire throughout the picture, there is also the constant sexual tension between her and Jack. She turns him down at first, but definitely leads him on until eventually they sleep together. Subsequently, we find out that she is also sleeping with one of Ryan Ritchie’s men, Bob Rogers, Jr. (Charlie Sheen), who is also married. There is dialogue, too, revolving around sex, as well as one scene where Jack and Nancy go skinny-dipping, which shows some nudity.

While the profanity in the film is minor (there is one “f” word, too), what might be more offensive is the content of some of the conversations. In one scene Nancy asks Ryan what he first liked about her. He asks her if she wants to hear the truth or what she wants to hear. She shallowly says either. He tells her something nice first, but then tells her what he really thinks, delivering a crass line that boiled down to wanting to have sex with her.

In another scene, Jack’s friend, Walter (Morgan Freeman), encourages Jack to “have a little faith.” Jack inquisitively asks, “Faith? You mean like, faith in God?” Then Walter responds by saying, “No. God is an imaginary friend for grown ups,” and then goes on to give Jack more advice.

The closest this movie tries to get to having any sort of “faith” is the relationship between Jack and a tenant in one of Walter’s bungalows, Virginia (known as #9), whom Walter knows is a Catholic. She ends up helping Jack, so perhaps that is how they try and involve “having a little faith.” Aside from that, there is one peculiar moment when Jack is helped and he exclaims, “Praise the Lord!”

One might want to know, too, about a little bit of violence where one person is strangled and another shot. It’s not supposed to be taken too seriously, and like the rest of any of the drama in the story anyway, ends up being pretty unconvincing and ineffectual.

Aside from some beautiful wide shots of Hawaii and cool cliff diving footage, there was nothing valuable to experience in seeing this movie. It was difficult to care at all about any of the characters. The main reason we might like them are because they are actors we have already been endeared to before in other films, but that doesn’t go very far here.

Paul exhorts us to “Set your mind on the things above, not on the things that are on Earth” (Colossians 3:2), but seeing this movie doesn’t seem to engage in anything close to this. There is nothing really transcendent about it.

Negative—This film should earn zero stars on production quality! It was BORING! I almost fell asleep. We almost walked out. It moved so slowly that when they threw you the curve ball, you were asleep and missed it. And very offensive to Christians. The anorexic, nearly naked form of the main female lead was annoying as well as Hollywood’s token gay couple (policemen in this case and one of them had stolen a harmonic from the Jack character played by Owen Wilson). Further, theft and deception as well as marital unfaithfulness. What was surprising was the Bill character played by Charlie Sheen actually turned down the blonde bombshell. It helped that his wife was in the car honking the horn but this could literally be, and I’m not joking, the only positive human action in the movie! Do not watch this, do not rent it, tell everyone to AVOID!
My Ratings: [Very Offensive/1]

Tim Emmerich, age 36
Negative—…The only reason I went was for my friend who has an interest in surfing. Unfortunately, the movie had hardly anything to do with surfing. In my opinion, the movie was based on sinful natures, such as adultery, stealing, lying, cheating, killing… etc. I can handle a movie like that …as long as it has a very good story line, but unfortunately it didn’t have one. I left the theater thinking it was a big waste of time and money.
My Ratings: [Very Offensive/1]

Colleen, age 20
Negative—Why was the film made? Who exactly is this supposed to appeal to? This was really a bad idea from start to finish. The acting is rather good, but the story is weak and the ending is incredibly implausible. As for moral objections, my main objection was the blasphemous comment about God being an imaginary friend for grownups. Not only did this bother me, but it didn’t even have any meaning or significance behind it. I really don’t take offense at language or other objectionable content for the most part as long as it is used for a good reason, but this is pointless. It was said twice, I’m guessing as an attempt at comedy? In summary, there is no real reason to waste your time on this flop.
My Ratings: [Average/1½]